Sama Khosravi Ooryad explains that even amidst the resurfacing of violent sate repression that is reminiscent of what was meted out by the regime during the 80s, the people will not be deterred from fighting on. 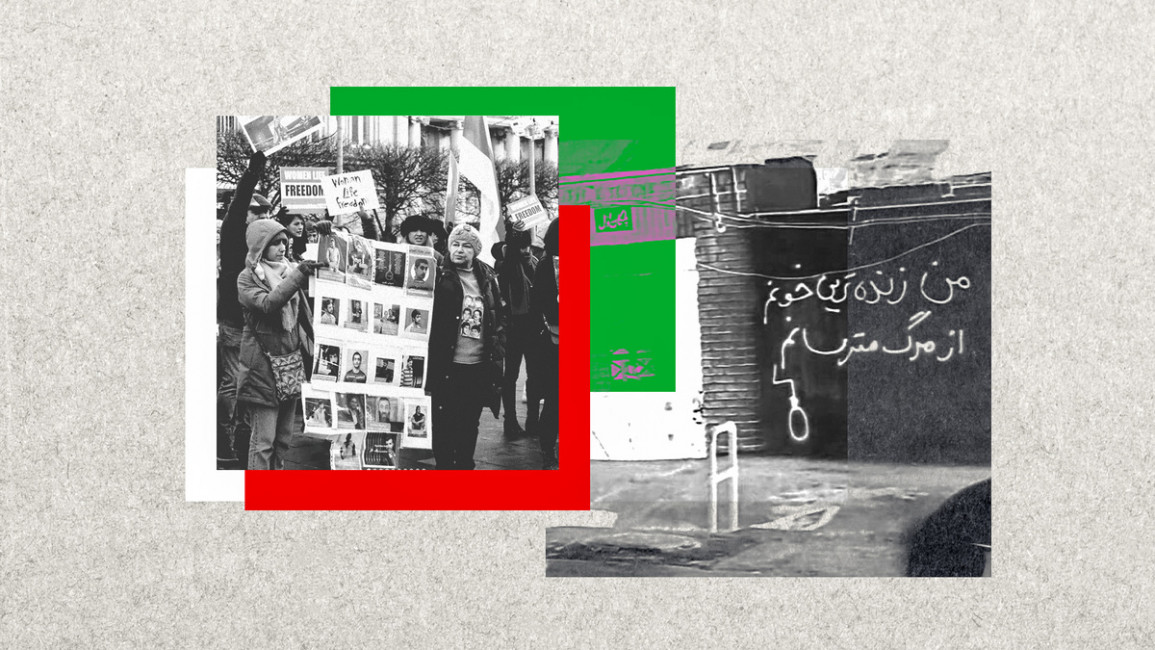 Mansoureh Behkish protesting the execution of protestors in Dublin, Ireland [left] and Graffiti in an Iranian city reads: 'I am the liveliest blood, don’t dare to scare me with death' [right].

Mansoureh Behkish, a prominent member of Iran’s Dadkhahi (justice-seeking) movement, which includes the Khavaran Mothers and the Mothers of Laleh Park, took to social media to call for an end to the Iranian regime, its brutalities, and its use of executions. In a photo Behkish shared of a demonstration in Dublin – where she now resides in exile – condemning the most recent round of executions, she wore a sign around her neck with pictures of six members of her family. These individuals were killed, some by means of execution, alongside thousands of political prisoners back in the late 1980s in Iranian prisons, and subsequently buried in the Khavaran cemetery which was used in as an unmarked mass grave.

For decades, Behkish and other members of the Khavaran Mothers movement have been seeking justice for both their loved ones who were killed during the 1988 massacre, and everyone else in the country.

State execution in Iran is now once again running at full force, with the authorities issuing death sentences to vulnerable youth as young as 22,  as well as members of the marginalised Baluch minority. It is also taking place amidst the killing of hundreds of protestors who took to the streets in the aftermath of 22-year-old Kurdish-Iranian Jina (Mahsa) Amini’s murder in September 2022 by the morality police in Tehran.

Since its early days, this uprising has been propelled by working-class women and other marginalised groups who are claiming their ‘past and future lives back’ by calling for an end to the patriarchal-nationalist-capitalist theocratic regime and taking their fate into their own hands, chanting Jin, Jiyan, Azadi (Woman, Life, Freedom).''

Now, along with Amini, the names of hanged youth Mohsen Shekari, Majidreza Rahnavard, Mohammad Mehdi Karami and Seyyed Mohammad Hosseini, are being called by people in the streets, and shared all over social media to demand justice for them.

Instead of running scared, or even simply asking the regime not to proceed with its executions, people have been campaigning beyond #NotoExecution. This has been visible in the statements shared through the #Revolt_against_the_executions hashtag. Iranians have been demanding justice by calling for a more sustained uprising and securing an end to the entire regime.

In reality, the regime is planning to rebrand its surveillance and suppression of women’s bodies through smart technologies, as well as financial control – for example, blocking the bank accounts of women who disobey compulsory hijab.

All of these developments evidence that the executing machine of the 80s in Iran, is still at work. The stark difference this time, is that the entire country is now bravely outrightly defying it.

In reference to the regime’s unjust killings and ill-treatment of political prisoners, student activist Leila Hosseinzadeh stated, “is all of this to prove that the god of the 80s is alive? We know that, but we don’t believe in that god of death.” Hosseinzadeh’s pertinent words were shared by her family and others across social media when she was imprisoned in Shiraz by the regime, despite struggling with an autoimmune disease and other serious health issues.

The executing ‘god of the eighties’, a reference many have been making across social media, refers to a speech given by Iran’s Supreme Leader, Ali Khamenei, earlier last year, during which he declared that today’s god is the same god as that of the eighties.

From its inception in September 2022, the intersectional feminist revolution-in-the-making in Iran has received support, prompted calls for action, and been sustained and led by brave women, feminist activists, and numerous protestors across the country.

This uprising has undoubtedly shaken the regime's followers to their core. As confirmed by an anonymous feminist activist in Iran: “The god of the eighties is terrified and horror-struck, from our eyes who do not look at their killing-crime-show, from our ears that do not listen and believe their narrative [of accusing innocent protestors to justify their atrocities], and from all of us who consider them the evil incarnate and outright deny their legitimacy.”

This sentiment was echoed in a recent open letter by 18 women political prisoners in Evin Prison, who denounced the executions and urged everyone to “rise to tear the rope around our youth’s necks and to break down the erected pillars of death.”

Since its early days, this uprising has been propelled by working-class women and other marginalised groups who are claiming their ‘past and future lives back’ by calling for an end to the patriarchal-nationalist-capitalist theocratic regime and taking their fate into their own hands, chanting Jin, Jiyan, Azadi (Woman, Life, Freedom).

The “terrified god of the eighties” can no longer prevent or halt the protests by wielding archaic tools of terror. Now, these demands for radical change, justice, and hope, as a protest sign at Tehran University eloquently stated, “will not be executed.”

Sama Khosravi Ooryad is a feminist scholar and new media & digital cultures researcher based in Sweden.