In July President Tebboune called for the teaching of English to become part of the primary program. The rapidity of this reform involves many ulterior motives regarding France and the colonial language, but also the failure to arabise schooling. 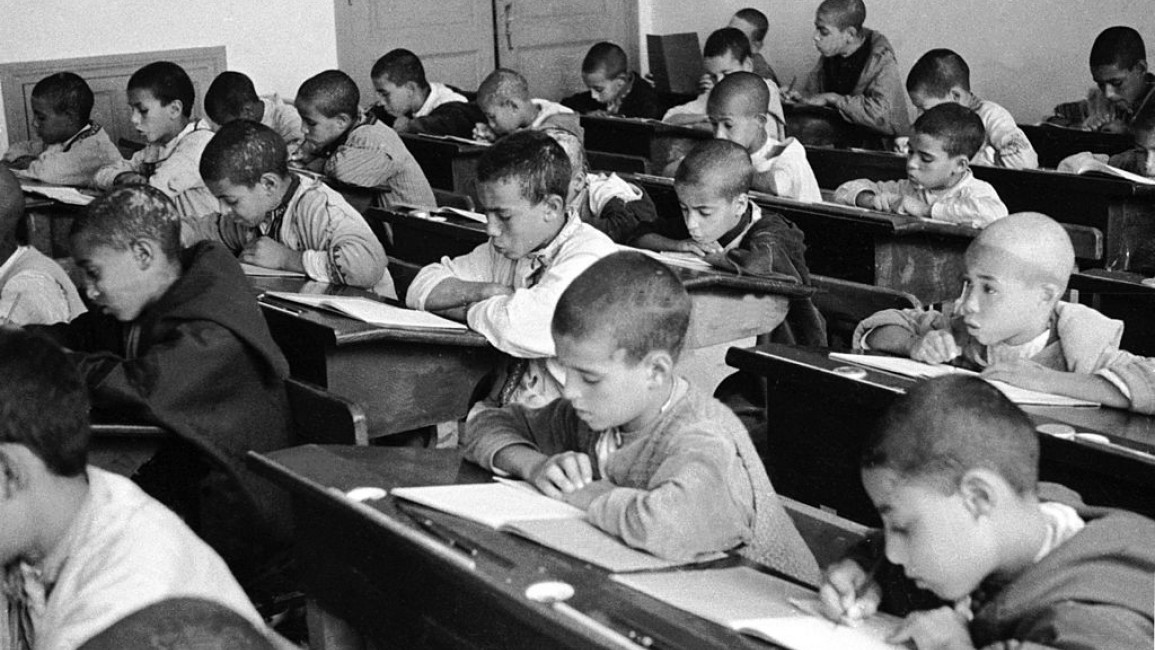 Algerian children in 1950 doing their schoolwork in a context where all hope of social advancement had to pass through learning the coloniser's culture, these children were taught to idealise the French language. [Keystone-France/Gamma-Keyston/GETTY]

When Algerian children went back to primary school for their third year on 21 September 2022, they discovered a disconcerting change of program. For in addition to French, which they start learning at that point in their school curriculum – age 10 or 11 – they will start studying a second foreign language, English.

Less than two months earlier, in the midst of the summer holidays, President Abdelmadjid Tebboune announced that the authorities would add English to the primary school syllabus at the start of the new school year in September.

For ordinary Algerians, there was nothing new about this announcement. Several times in the past the country’s rulers have touted English as a miraculous solution, a cure-all for the poor showing of Algerian universities in the international honours lists and a substitute for French, “that extinct language.” Obviously, this is one way to defy France whenever one of its rulers makes some disparaging remark about the way Algeria runs its domestic affairs and, of course, too, a way of replacing the coloniser’s language.

''Hasty, rushed and reckless: the decision to start teaching English in primary schools this very year brought sceptical reactions from educationalists, teachers’ unions and politicians. Everyone agrees that bringing in that language “is a good thing”, it will make universality accessible to Algerians. But many feel that the haste with which the decision was taken is “abnormal.”''

The idea of replacing the language of Molière – today the foreign tongue most frequently taught in the Algerian national education system – with the language of Shakespeare in primary schools has often been considered but nothing was done about it. Hence, on 31 July, Abdelmadjid Tebboune took everyone by surprise.

In order to justify his choice, he paraphrased the famous Algerian, writer Kateb Yacine, who described French as a “war trophy.” “The French language is a ‘war trophy’ but English is an international tongue,” said President Tebboune.

The presidential speech did not fall on deaf ears. Just a few hours later, the National Education Minister, Abdelhakim Belabed announced the “implementation” of the President’s decision at the beginning of the school year in September. No new teachers have been hired? We will find them! There is no textbook? We will print one! And right away the heads of each wilaya’s educational directorate issued calls to recruit qualified persons.

It would be a huge task to appoint English teachers in 20,000 primary schools, especially as these positions are not even budgeted. The rush was on: 60,000 applications were submitted in just a few days. But in the end, only 5,000 applicants were hired. With little or no classroom experience, these new teachers were given a few weeks’ crash course to be ready for school opening.

The fears and criticisms of educationalists

Hasty, rushed and reckless: the decision to start teaching English in primary schools this very year brought sceptical reactions from educationalists, teachers’ unions and politicians. Everyone agrees that bringing in that language “is a good thing”, it will make universality accessible to Algerians. But many feel that the haste with which the decision was taken is “abnormal.”

Should Algerians expect an apology from France 60 years on?

“Schooling is a long-term affair. It must be planned over a period of 20 or 30 years,” said eminent sociologist Aissa Kadri, author of any books on education is Algeria. “This is a decision which should have been discussed, thought-out”, several teachers’ unions have declared.

But the government has listened only to the President’s instructions. Just a few days before classes resumed, the Ministry of Education brought out a textbook for third-year primary school pupils. It contains the rudiments of English, an alphabet and dialogues suited to everyday use in Algeria. Published in just a few weeks’ time, the textbook is the only one of its kind. Was it put together before now and left in a drawer? The Ministry refuses to answer this question.

While in some regions, the new teachers must run an obstacle course to reach their workplaces, in others there are simply no English teachers available, especially in parts of the Sahara. Pupils in those regions will be deprived of English, just as they cannot learn French for lack of teachers.

According to members of the profession, this is due not only to the absence of trained local personnel but also to the non-existence of the material conditions (housing, relocation allowances, etc.) which would facilitate the hiring of teachers from other regions where thousands of young foreign language graduates are condemned to being on the dole, as schools in the North and the big cities already have enough teachers. This situation has given rise to what linguist Khaoula Taleb Ibrahimi calls “linguistic discrimination”.

Like many academics and critics, Aissa Kadri, professor emeritus at Université Paris 8, draws a parallel with the Arabisation policy of the seventies. In those days, Colonel Boumediene’s government made the “break with colonialism” a sacred cause. To achieve this, it was decided to arabise Algerian schools, whence the notorious “fundamental school system” which taught tens of thousands of Algerians with very mixed results. But as there were not enough Arabic-trained Algerian teachers, the regime came up with a solution: it turned to Syria and Iraq but mostly to Egypt, in search of cooperators.

Now, not only were these “teachers” novices, but many were chosen among the imprisoned Muslim Brotherhood members whom the Egyptian regime wished to deport. Worse still, if we are to believe historian Mohammed Harbi, once a member of President Mohammed Ben Bella’s cabinet until the 1965 coup when he went into exile in France, the Algerian authorities “deliberately” brought in teachers affiliated with the Brotherhood to give the Algerian school system an ideological slant.

While it is hard to verify the truth of this claim, Aissa Kadri is convinced that it was partly that decision to push through the teaching of Arabic in the Algerian school system that was at the origin of the violence of the 1990s.

Like the Arabisation of that earlier period, this introduction of English into primary schools is not without a hidden political agenda.

Algeria’s revolutionary history is tarnished by its regime

Without coming right out and saying so, Algeria’s rulers have been wanting for months now to rid their country of the French language. Like President Abdelmadjid Tebboune, many higher-ups speak fluent French, sometimes better than Arabic, in fact. But to satisfy a segment of the public who are demanding “an end to French influence”, they have decided to cut all ties with a language which harks back to the days when their country was a colony.

And this can take the form of open transgression, as on last 25 August in Algiers. Abdelmadjid Tebboune played host to his opposite number, French President Emmanuel Macron. When the two chiefs of State made their closing speeches, the news correspondents present in the hall of the El-Mouradia presidential palace discovered that the signs on the lectern pediments were in Arabic and English rather than French, as has been customary. This was quite a slap in the face for France, but it did not prevent the Algerian president from addressing the press, two days later, in the language of Molière.

But this gesture was in fact merely a symbolic step. In 2021, for example, several ministerial departments demanded that the correspondence of their decentralised administrations be written only in Arabic, the country’s official language – along with Berber. Now up until then, many administrations still wrote to one another in French. The websites of some universities wrote their homepages in English while keeping the French content.

Improve the ranking of universities

Previously, a Minister of Higher Education had decided, at the end of 2019, to require masters and doctoral candidates to submit their theses in English. When this was impossible, they were asked to provide an abstract in English. He, like many others, felt that the language of Victor Hugo no longer favours Algerian universities in international rankings. Their poor showings are ascribed to the absence of the language of Shakespeare.

Right now, only the University of Sidi Bel Abbes (West) figures on the Shanghai Ranking for 2022. That institution has managed to be 101st in urban engineering, 201st in mechanical engineering and 301st in materials science. But this is a drop in the bucket for a country which has over 100 academic institutions.

Yet the decision to generalise the use of English in Algerian universities has not been widely implemented. Two years later, many university classes are still taught in French, especially in medicine, computer science and technical fields.

“The competition between English and French is more political than anything else and is used by the powers that be or by certain segments of society to draw attention away from issues which are more important for the future of the country” is Khaoula Taleb Ibrahimi’s analysis.

Again this year, the Ministry of Higher Education sent a letter in September to all Algerian universities asking them to “train” English teachers in order to generalise the teaching of that language.

In fact, literary Arabic is the language taught in Algerian schools. From the age of six, schoolchildren learn it even if it is not the language spoken at home, since this may be Algerian Arabic or Berber or – rarely – French. Once they have graduated from secondary school, many students find themselves in specialities where the teaching is mainly in French, which drives many of them to abandon their studies or change subjects. A linguistic trauma which linguist Khaoula Taleb Ibrahimi deplored in an article for Le Figaro. Some students in their first-year class “no longer even know how to pen Latin characters … [i]n the course of their studies, many of them never encountered any foreign language”, she added wryly.

Ali Boukhlef is an independent Algerian journalist, he has worked for two daily newspapers, Liberté and El Watan.

This article was originally published by our partners at Orient XXI.