'Not a UFO': Bizarre cloud stuns residents in Turkey's Bursa

'Not a UFO': Bizarre cloud stuns residents in Turkey's Bursa
Offbeat
2 min read
The New Arab Staff
A stunning lenticular cloud made an appearance in skies over the Turkish city of Bursa, startling its residents due to its resemblance to a UFO 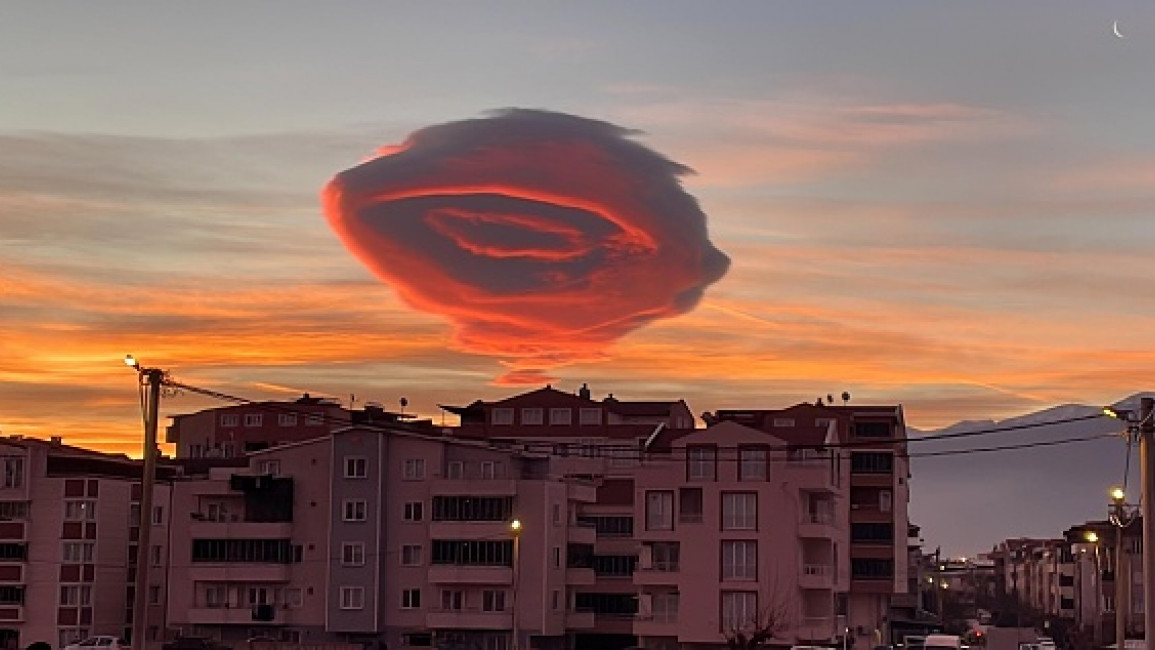 A gigantic red cloud with a bizarre shape has stunned the residents of the Turkish city of Bursa, some of whom thought it was a UFO.

The lenticular cloud, which featured a hole in the middle, was spotted on Thursday over the historic city in northwestern Turkey and remained intact for around an hour, according to the Turkish broadcaster TRT.

As the cloud appeared at sunrise, the strange phenomenon took an orangey-pink tint as startled citizens of Busra looked on.

The double-ringed, oval-shaped cloud was seen from the Kestel, Gursu, Yildirim, Osmangai and Nilufer districts of Bursa, reported the Turkish Anadolu Agency.

Internet users likened the cloud to the UFO which appeared in the science fiction horror film "Nope", directed by Jordan Peele.

Lenticular clouds usually look like saucers or lenses, hence the name, and have often been mistaken for UFOs.

They’re formed mostly in the troposphere - the lowest section of the earth's atmosphere - typically in parallel alignment to the wind direction.

According to the country’s General Directorate of Meteorology and the US National Weather Service, the cloud is usually formed because of rough wind fluctuations over hills and mountains, and indicate turbulence moving downward in the sky.

The US weather service also said that the strange-looking cloud is often one of the most common explanations for UFO sightings in the world.

The clouds generally do not form over low-lying or flat terrain, thus making them even more rare for humans to see. They’re usually found at heights of between 2,000 and 5,000 metres.

Turkey is no stranger to bizarre geographical phenomenona. The central province of Konya is home to approximately 300 large, circular sinkholes which appear in fields, as a result of excessive use of groundwater for irrigation.