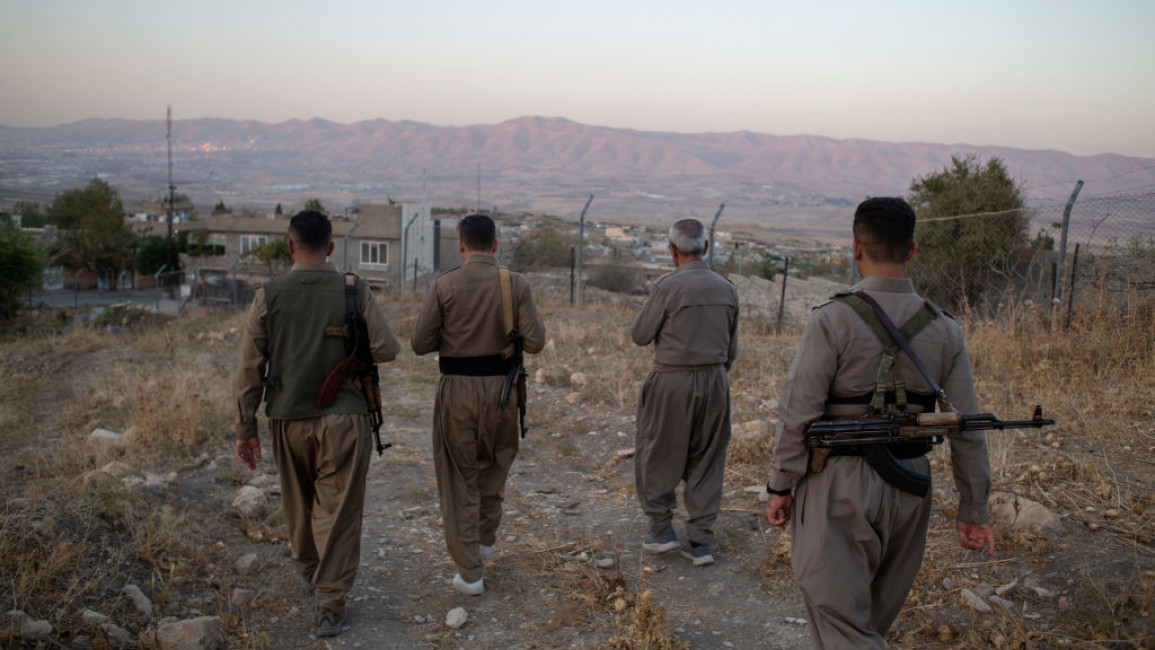 At least one person was killed as Iran resumed missile and drone strikes late Sunday night on bases of the Iranian Kurdish opposition parties in northern Iraq.

The strikes targeted bases of the Kurdistan Democratic Party of Iran (KDPI) near Koya town of Erbil province, and the Komala Toilers Party of Kurdistan, in the Zirgwez area of Sulaimaniyah province.

This is the second time in this month that the Islamic Revolutionary Guard Corps (IRGC) is targeting the bases of the Iranian Kurdish parties. Two people were killed on 15 November, and several others were wounded when Iran's Islamic Revolutionary Guard Corps (IRGC) targeted the headquarters of the Iranian Kurdish opposition parties in northern Iraq with ballistic missiles and suicide drones.

Karim Karimi, the representative of Komal in Erbil, told The New Arab that the strikes on the party's bases in Zirgwez had no casualties, as they had taken precautionary measures.

Shortly after the assaults on Monday, Mohammad Pakpour, the commander of the IRGC's ground forces in a tweet threatened the Kurdish opposition forces to either "clear" their bases in northern Iraq, or wait for "unprecedented" future attacks.

Karimi also said that they will not evacuate their bases, but may take further precaution measures by transferring women and children to safer areas.

"Such indiscriminate and illegal attacks place civilians at risk, violate Iraqi sovereignty, and jeopardize the hard-fought security and stability of Iraq and the Middle East," General Michael Kurilla, commander of the US Central Command (CENTCOM) said in a statement.

"We call on the Republic of Iran to stop this violent campaign against the Kurdistan Region. Stability will never be achieved through violence. The KRG calls on its friends and partners in Baghdad, the United Nations, and the international community to take a clear and principled position on Iran’s continued aggression," the statement added.

"Repeated attacks, violating Iraqi sovereignty, must cease. Such aggression not only recklessly heightens tensions but also causes tragedy," the UN Assistance Mission for Iraq (UNAMI) said in a statement without naming any country for launching the strikes. "Whatever external score a neighbouring country is seeking to settle, the use of established diplomatic instruments is the only way forward."

Iran's strikes came just hours after the two different wings of the Komala Toilers Party of Kurdistan announced a unification from Sweden under the leadership of Abdulla Muhtadi.

The Democratic Party of Iranian Kurdistan, a Kurdish Iranian group exiled in Iraq, said in a statement that Iranian surface-to-surface missiles and drones hit the group and also asserted that the strikes had hit Koya.

"We neither engaged in any armed operations inside Iran nor provided any weapons to the protestors," Karimi added, stressing that "protests in Iran will not end until the Islamic regime is toppled."

He claimed that at least seven Kurdish protesters have been killed by the Iranian security forces in the last 24 hours.

Mahsa Amini, a 22-year-old Iranian-Kurdish woman from the city of Saqqez, was arrested by morality police in Tehran for allegedly wearing her headscarf in an 'improper' manner. Her death in police custody on 16 September sparked nationwide demonstrations.