Iraqis to protest as dinar sets record low against US dollar

Iraqis to protest as dinar sets record low against US dollar
MENA
3 min read
Dana Taib Menmy
Iraq
The Iraqi dinar's downward slide comes after the US Federal Reserve imposed measures imposed on the Iraqi Central Bank to hinder illegal transfers of US dollars out of Iraq and into Iran and other neighbouring countries. 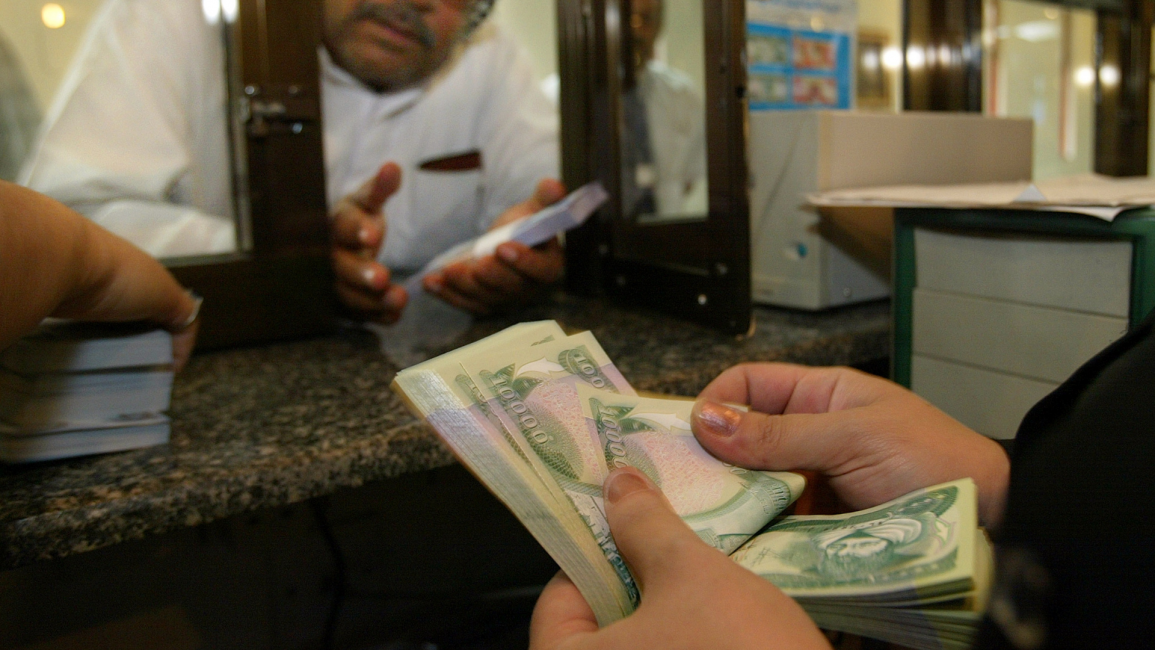 The value of the Iraqi dinar continues to fluctuate vis-a-vis the US dollar as Iraqis watch hopelessly the country's Central Bank, the parliament and the government struggling to control the black currency market.

While the formal rate by the Central Bank of Iraq is 1,470 Iraqi dinars per US$1, the exchange rate in the black market reached above 1,650 dinars to US$1 late Sunday.

"The ICB has limited selling the US dollar as compared to the huge demand on it, thus the rate of a dollar per dinar is increasing steadily," Rawaz Amanj, a worker in Sulaimaniyah city's currency market, told The New Arab over the phone.

"Iran is pouring large amounts of its locally printed currency (rial) in the Iraqi markets to exchange it with US dollars, and then transfer it to the country via currency dealers in Lebanon and Syria," Amanj added.

The devolution has caused prices of goods to soar, as well as triggering public anxiety and a recession in the local markets. The value of Iraqi dinars per dollar slightly rose early today when forces of the Iraqi government closed down several currency markets in the capital city of Baghdad.

The Iraqis are preparing to demonstrate in front of the ICB on Wednesday and protest against the continuous devaluation of the national currency. Several Iraqi lawmakers have also begun collecting signatures to summon ICB Governor Mustafa Ghalib Mukhaif to vote to withdraw trust from him for failing to stabilize the ID-dollar exchange rate.

Iraq, the second-largest crude oil producer in OPEC after Saudi Arabia, mainly depends on income from selling oil in US dollars. The Central Bank of Iraq (ICB) then sells the US dollar, as well as other foreign currencies in daily auctions.

Recently, the US Federal Reserve has blacklisted nearly fourteen Iraqi private banks and forced the ICB to launch an online platform in an attempt to limit the overflow of US dollars to countries sanctioned by the US.

Iraqi dinar continues to devalue against US dollar

Economists previously told TNA that those banks are believed to be owned by the Iraqi ruling parties and Iran-backed militias and were used to smuggle US dollars to Iran, Lebanon, and Turkey.

"The value of the Iraqi dinar is shrinking daily in exchange to the United States dollar after the Central Bank of Iraq limited the currency auction amount to the private banks to nearly US$100 million from US$250 million in the past," Khalid Haider, professor of economics at the University of Sulaimaniyah, recently told TNA.

"This step came as per a demand from the US Federal Reserve in an attempt to tighten the channelling of dollars into the neighbouring countries of Iraq, mainly Syria and Iran," he added.

Late in December, Sudani met the central bank governor to discuss the issue. The central bank has blamed the slump on "temporary pressures" sparked by the "adoption of new mechanisms to protect the banking sector, customers, and the financial system".

The Iraqi foreign minister is scheduled to visit the US soon, to pave the way for an expected visit by Sudani to the US and meeting with President Joe Biden soon. Political and economic observers say the meeting would be decisive as Sudani would try to settle the ID-dollar issue with the US senior officials.