Iraq wins the 25th Gulf Cup title with 3-2 goals victory over Oman
MENA
2 min read
Dana Taib Menmy
Iraq
For the fourth time in its history, Iraq has been crowned champions of the Gulf Cup after defeating Oman. 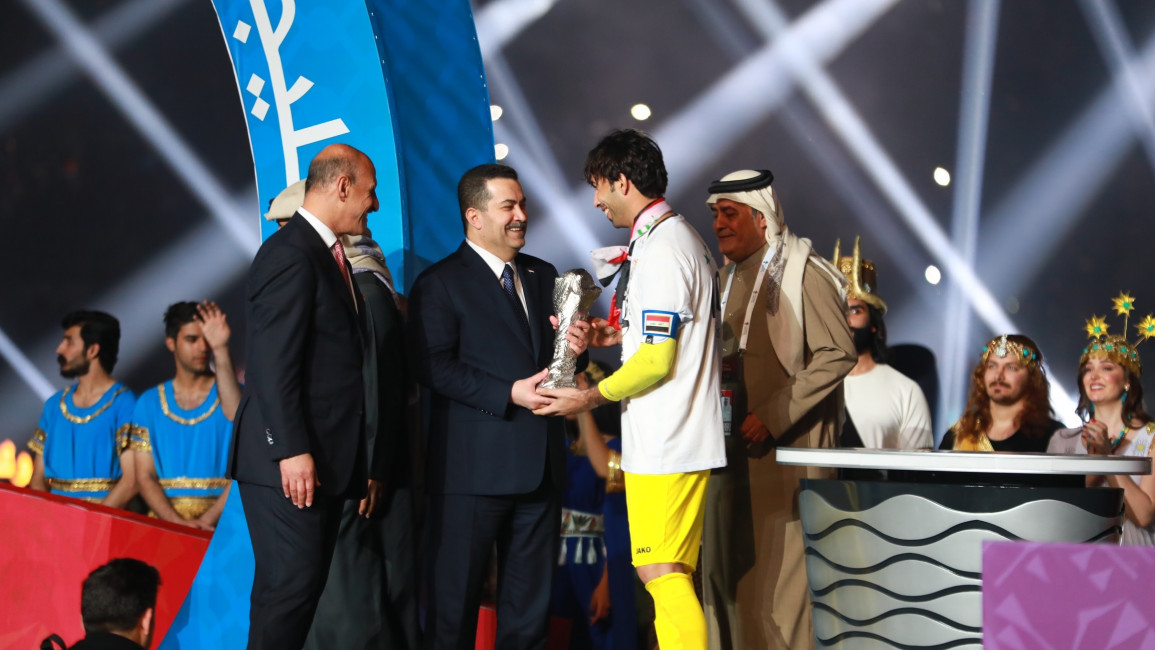 The Iraqi national team won the 25th Gulf Cup title, held in the southern Iraqi city of Basra late Thursday, after beating the Omani team with a 3-2 victory in an exciting match that lasted 124 minutes.

The Arabian Gulf Cup is held every four years with the participation of the six Gulf Cooperation Council countries (GCC) - Bahrain, Kuwait, Oman, Qatar, Saudi Arabia and the UAE - as well as Yemen and Iraq.

Iraqi midfielder Ibrahim Bayesh scored the first goal for Iraq at 24 minutes in the first half. Iraq defended its goal and Oman could not strike into Iraq's net until the last ten minutes of the second half when Omani midfielder Salaah al-Yahyaei scored on a controversial penalty kick, and the game dramatically entered into overtime.

Iraqi defender Manaf Younis scored Iraq's third and winning goal at 122 minutes. It was two minutes into the extra time when Kurdish striker Aso Rustam passed the ball and Younis scored the goal with a header.

Iraqis across the country poured out into the streets to celebrate the historic victory with fireworks, waving the Iraqi flag, dancing and singing.

With Thursday's victory for the "Mesopotamian Lions," Iraq has been crowned with the Gulf Cup title for the fourth time in its history. The last three were in 1979, 1984 and 1988, while the Omani team won the championship twice, in 2009 and 2018.

Iraqis have been joyous about hosting the tournament, the first to take place in the country since 1979.

Decades of unrest and conflict have prompted a series of FIFA bans on Iraq from hosting international matches.

That has forced the Iraqi team to play home games abroad. Since the devastating and illegal US-led invasion in 2003 that ousted dictator Saddam Hussein, Iraq has only played three competitive matches on home turf.

Hosting the Gulf Cup could encourage FIFA to allow World Cup qualifiers to return to Baghdad.

The next Gulf Cup will take place in Kuwait in December 2024.