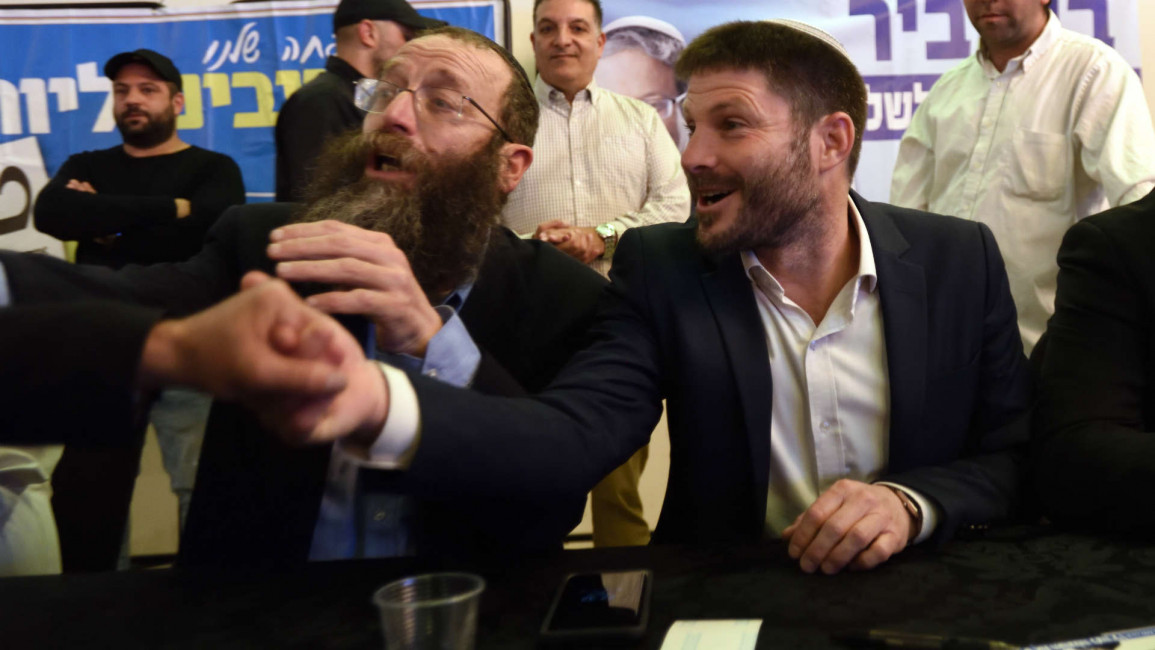 Prospects of a right-wing-religious governing coalition are raising concerns among those who didn't vote for the Netanyahu-led bloc and from Israel's principal ally, the United States.

"We see negotiations between the right and the far-right, between the orthodox with the ultra-orthodox," said former Meretz MK Mossi Raz to The New Arab.

"It's really scary," he added.

Left-wing Meretz missed the electoral threshold on November 1st and is now out of the Knesset for the first time since its founding in 1992.

On Wednesday, the Likud party cancelled meetings with Religious Zionism leader Bezalel Smotrich after a deadlock in negotiations over ministerial posts. Later, however, understandings between incoming PM Netanyahu and Jewish Power head Itamar Ben Gvir over legalising settlement outposts in the occupied West Bank were announced.

As a result, dozens of outposts in the occupied West Bank not sanctioned by the Israeli government would be retroactively legalised within 60 days of forming the new government.

Smotrich, who has no substantial military background, is asking to be the minister of defence. The Israeli defence ministry is the effective ruler of the occupied West Bank. It controls nearly everything from managing the occupation to Jewish settlements security to military checkpoints to issuing building permits to infrastructure. The critical post also requires extensive manoeuvring with the United States and countries in the region.

The 42-year-old Smotrich was born in a Jewish settlement in the occupied Syrian Golan Heights but grew up in Bet El near Ramallah.

In 2006, he founded the pro-settler Regavim organisation, a notorious body among Palestinians that tracks construction in area C of the occupied West Bank.

Smotrich's first stint as a member of the Israeli Parliament, the Knesset, was in 2015 in Naftali Bennet's Jewish Home party. In 2019 he became minister of Transportation during the 34th government under the premiership of Benjamin Netanyahu. However, it was short-lived; he served the post for about eleven months, after which the 35th government came, and he was out.

Why the defence ministry?

Partly because Smotrich wants to put the Jewish settlements in the occupied West Bank under the supervision of the relevant ministries, whereas under the current arrangement, they fall under the direct rule of Civil Administration, a branch of the defence establishment. The proposed transfer of jurisdiction was interpreted as an attempt to annex parts of the West Bank and prompted a sharp response from the US Ambassador to Israel, Tom Nides.

Earlier, members of the 25th Knesset were sworn in. As the formal ceremony was taking place inside the Knesset building, a few left-wing protesters stood outside, voicing fears about the new composition of Parliament.

"More than half of the coalition members are religious extremists," said Laura Wharton, a City Councilor and member of the Meretz party.

Two ultra-religious parties elected to the Knesset, the Shas and United Torah Judaism parties, do not have women parliamentarians in them as a policy.

Leader of the Shas party Aryeh Deri has said in the recent past that politics is not a woman's "natural place."

Three members of the newly elected Parliament are vying for key ministerial posts despite having controversial views and a criminal past.

Itamar Ben Gvir, leader of the Jewish Power party, one of three parties under the umbrella of the Religious Zionism party, is asking to be the minister of Public Security, the ministry that has authority over the Police. Ben Gvir was convicted of racial incitement and supporting a terror organisation.

Smotrich is just one bigoted apple in Israel's rotten system

Bezalel Smotrich, leader of the Religious Zionism party, insists on the defence ministry, a vital post in any Israeli government. However, the relatively young Smotrich has neither the qualifications for the job nor the reputation for a position that requires dealing with foreign counterparts. In 2005, as Israel was withdrawing from the Gaza Strip, the young Smotrich was arrested by the Police for three weeks after he was suspected of planning an attack against Israeli soldiers tasked with enforcing the eviction of settlers out of the Strip. Smotrich was not charged, however.

The third MK heralds from the orthodox Shas party, founded by Rabbi Ovadia Yosef in 1984. It represents Jews of Hispanic and Middle Eastern origins, and its followers advocate Jewish religious law. MK Aryeh Deri, now party leader, is looking at the finance ministry. Earlier in the year, Deri was convicted by a court for tax evasion.

"It's a kleptocracy," Wharton charged.

"Smotrich is a draft dodger, but he wants to be defence minister. Ben Gvir has a substantial criminal record and wants to be head of the Police and we have Deri who sat in prison for tax fraud and he wants to be the minister of finance."

According to Hebrew media, the US has signalled Netanyahu to appoint ministers they can work with, most likely a reference to the future defence minister.

Reports that Netanyahu had been conducting unity government talks with rival centrist parties were denied by the Likud, Lapid and Gantz.