With Netanyahu and Ben-Gvir, Israel's far-right is here to stay

With Netanyahu and Ben-Gvir, Israel's far-right is here to stay
Voices
7 min read

After decades of normalised ultranationalist discourse in politics and impunity from the international community, Israel's far-right election victory ushers in a new era of emboldened extremism against Palestinians, writes Ali Adam. 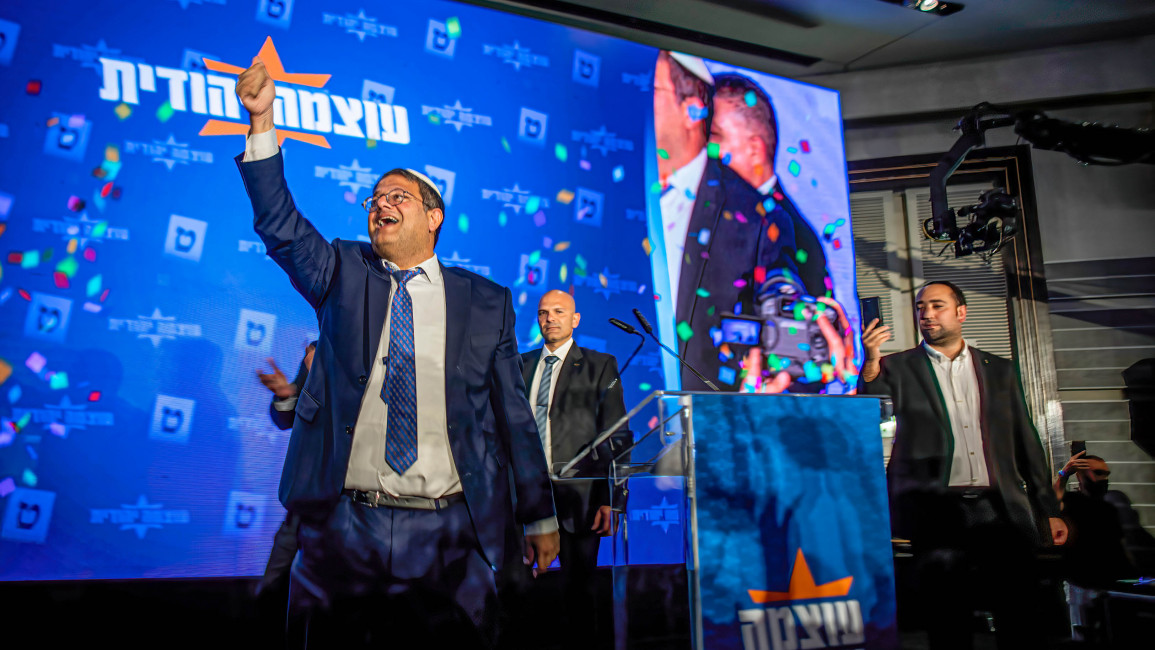 Leader of the ultranationalist party Otzma Yehudity Itamar Ben-Gvir speaks to supporters in Jerusalem after hearing the results of the exit polls giving his party 14 seats in the parliament. [Getty]

The Israeli election, held on November 1st, resulted in the comeback of the longest-serving prime minister, Benjamin Netanyahu to the leadership of Israel after a short stint in the opposition. But the biggest winner of the election was the religious far-right, and especially Itamar Ben-Gvir.

Ben-Gvir is the leader of the Otzma Yehudit (Jewish Power) faction, an extremist group that was integrated in Religious Zionism in 2021. The faction’s leaders, especially Ben-Gvir himself, are ideological heirs of the extremist Rabbi Meir Kahane.

Kahane was the leader of the Kach party, which was designated for years by the US and Israel as a terrorist group after one of its supporters, Baruch Goldstein, massacred 29 Palestinians in Hebron in 1994, in what is known as the Al-Ibrahimi Mosque massacre.

"More worryingly, in the past two years, [Ben-Gvir] has already become the most influential right-wing figure in Israel, barring Netanyahu himself"

The newly emboldened Ben-Gvir used to keep a picture of Goldstein in his living room, until he removed it in 2019 prior to launching an electoral run for his party.

Ben-Gvir, who’s settler in Kiryat Araba, one of the most radical settlements in the occupied West Bank, has 53 criminal indictments and twelve convictions under his belt, including incitement to racism, destroying property, and supporting a terrorist organisation.

His election promises included deporting ‘disloyal Palestinian citizens of Israel including Arab lawmakers, loosening the rules for the Israeli army and police to allow them to shoot more easily at Palestinians, enacting the death penalty against convicted Palestinians, and providing more immunity to Israeli soldiers.

This zealot is now expected to hold a major ministerial position in Netanyahu’s incoming governing coalition. More worryingly, in the past two years, he has already become the most influential right-wing figure in Israel, barring Netanyahu himself.

The huge success of Ben-Gvir and his Jewish Power party in the recent Israeli election is the latest manifestation of the growing extremism and racism in Israel, and the drastic shift to the extreme right.

Once on the fringes, the extremist far-right could now determine the future of Israel. @semssami explores the lay of the land in Israeli politics in the wake of the recent #IsraelElections ⬇ https://t.co/JnPq07VVur

While the results of the election and rise of the far-right were described as shocking by some pundits, they’re only shocking people who are either in denial about Israel’s reality or have not been paying attention.

The bedrock of the Israeli state and the Israeli political system is the systematic oppression and ethnic cleansing of the Palestinians. So long as this is the reality, it will be easier for more extremist political parties to gain traction in the political landscape than more moderate ones, and that’s what’s been happening for decades now.

While the international community was busy chastising Palestinians with vague and overexaggerated accusations of incitement in an attempt to ‘bothside-ise’ the occupation, they should have been paying attention to Israel’s own incitement.

Over the past three decades, there has been an incessant and steadily rising vilification, demonisation and incitement campaigns against the Palestinians in Israeli media, public institutions, and the political arena.

Palestinians have decried this incitement repeatedly to the international community, but their calls fell on deaf ears. The rise of the far-right is a byproduct of this anti-Palestinian atmosphere, and continually enabling Israel’s aggression and escalating shift to the extreme right.

In fact, the current national political discourse in Israel is very similar to the Kahanists’ supremacist and extremist rhetoric, and the xenophobic ideas and positions propagated by Ben-Gvir are generally accepted by a significant portion of the Israeli public. An August poll found that nearly two-thirds of Israelis support Ben-Gvir’s proposal for expelling ‘disloyal’ Palestinian citizens of Israel.

Despite a plethora of political takes from Israeli experts arguing that the determining factors in the Israeli election would be the economy, cost of living, or religious and state issues, the reality remains that anti-Palestinian pledges remain the easiest way to gain grounds in the Israeli political landscape. This has helped the meteoric ascent of Religious Zionism; no one has run with more anti-Palestinian incitement and vitriol than them.

Another reason that mustn’t be overlooked is the continued silence and inaction of the international community, especially the US, no matter what Israel does.

The perpetual unwillingness of the international community to hold Israel accountable for its occupation, or challenge its systematic anti-Palestinian discrimination, has allowed Israel to continue undeterred into the vortex of far-right supremacy.

Over the past 13 years in Israel, every Netanyahu government was increasingly more right-wing than the one prior, and the international community, led by the US, kept looking the other way.

"Facing international indifference, Netanyahu kept adding more extreme hardliners to his camp to lengthen his rule. Now, he has culminated with the addition of convicted Kahanist terrorists to his camp"

Since 2009, Netanyahu gradually mainstreamed and normalised the most extreme figures from the Israeli far-right before the world’s eyes. For example, in 2009, he added into his coalition Avigdor Liberman, an ultranationalist extremist who constantly attacked Palestinians citizens of Israel, calling for, among other things, forcing them to pass a loyalty test or lose citizenship.

Then, in 2013, he brought into his coalition Naftali Bennet, an extremist far-right figure who was calling for annexing parts of the West Bank.

Facing international indifference, Netanyahu kept adding more extreme hardliners to his camp to lengthen his rule. Now, he has culminated with the addition of convicted Kahanist terrorists to his camp.

Ben-Gvir’s Jewish Power was able to enter the Israeli parliament by merging with Bezalel Smotrich’s National Union party, becoming the Religious Zionism party. This move was orchestrated by Netanyahu ahead of March 2021 elections as he sought to ensure that no right-wing votes would be lost in his efforts to form the next coalition government.

Netanyahu failed to form the government in the 2021 election, but that move opened the door for Ben-Gvir and his party into the mainstream, after being an ostracised fringe group for so long.

Regardless of who wins Israel's elections, Palestinians lose

Had the international community, particularly the US and the EU, challenged Netanyahu and his increasingly extremist ultranationalist coalitions over the years, the invigoration of Israel’s far-right may have been avoided.

In flagrant complicity with Israel’s right-wing, the Biden administration legitimised Ben-Gvir’s group into the mainstream ahead of the election when, six months ago, it delisted Kahanist groups from the US list of foreign terrorist organisations.

All in all, the results of the Israeli election lay bare the reality about Israel and how much it’s hopelessly enslaved to the right-wing.

And now it’s a new era in Israel where a party that’s recognised as a terrorist group, even by Israeli laws and standards, has come to be at the centre of the political scene. Even if Netanyahu doesn’t include Ben-Gvir and his group in his incoming coalition government, they have already made their way into the mainstream, empowered and entrenched in the Israeli political arena to a point of no return.

"And now it’s a new era in Israel where a party that’s recognised as a terrorist group, even by Israeli laws and standards, has come to be at the centre of the political scene"

Ben-Gvir’s party has become arguably the most powerful political force in Israel, and its power and influence is likely to increase, especially given the younger generations of Israelis are more religious and more right-wing than their elders.

In the future, when the 73-year-old Netanyahu is forced to depart from the political scene, Ben-Gvir and his party will likely fill that void and assume Netanyahu’s supporters; that is, if they don’t manage to steal them earlier.

Ali Adam is a journalist and researcher whose work focuses on issues linked to the Israeli-Palestinian conflict.