Egypt ramps up campaign for Rosetta Stone's return from UK

Egypt ramps up campaign for Rosetta Stone's return from UK
Health
3 min read
Thaer Mansour
Egypt - Cairo
Egyptian prominent archaeologist Dr Monica Hanna has been in recent weeks leading efforts to repatriate the famous Rosetta Stone from the UK to its home by lobbying pressure groups in Egypt and the UK. 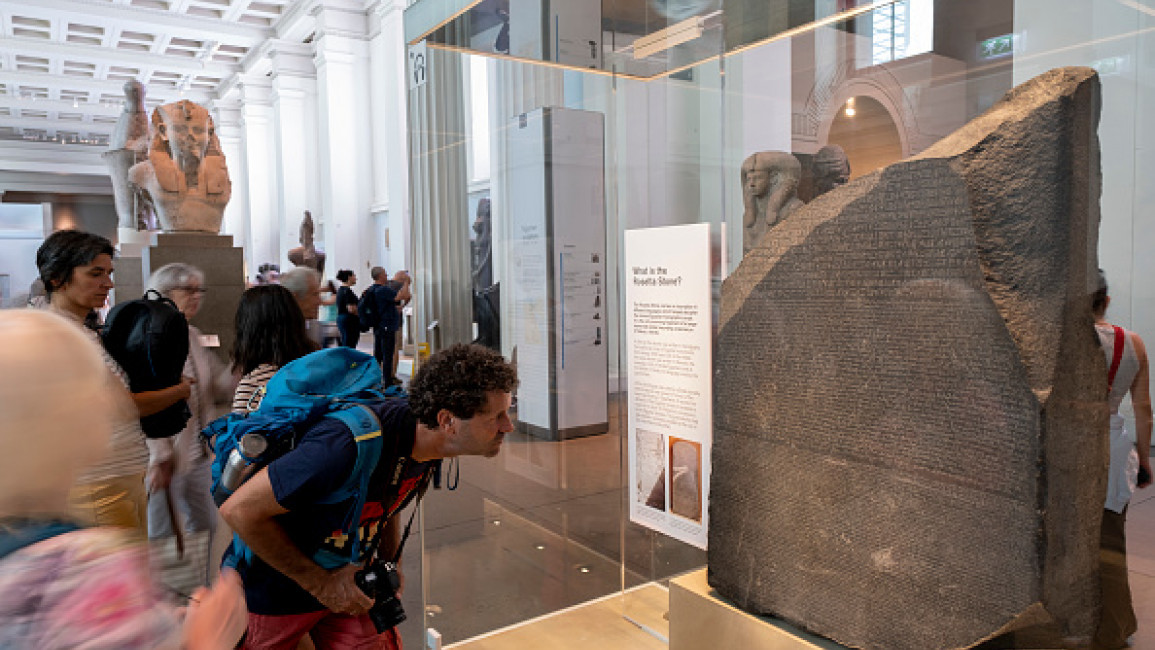 Efforts to repatriate the famous Rosetta Stone from the UK to its home in Egypt have continued on both the political and ethical levels, according to Egyptian prominent archaeologist Dr Monica Hanna.

"We have been lobbying through pressure groups in Egypt, and the UK, represented by a number of the House Commons MPs, for the return of the unique artefact," said to The New Arab, declining to mention the names of the British lawmakers she had contacted so far.

In recent weeks, Hanna had launched a petition and a campaign collecting signatures to retrieve the Rosetta Stone from the British Museum.

"It's a long-term campaign. We have already communicated with the Egyptian prosecutor-general's office to figure out the legal steps to be taken [in the near future] to call for what's rightfully ours [the Rosetta Stone] and other Egyptian artefacts exhibited at the British Museum," she added, without giving further details.

Hanna is the dean of the College of Archaeology and Cultural Heritage, the Arab Academy for science technology and maritime transport, an Arab League affiliated-educational entity based in Egypt.

"Our current petition has been targeting the cabinet indirectly. We haven't yet directly communicated with the government as we need to do our homework first – research and official accounts - before calling for official support," Hanna elaborated.

Prominent archaeologist Dr Hussein Abdel-Baseer is optimistic about the outcome of the ongoing pressure.

"I believe if the pressure keeps going, there may be hope for the return of the stone. But the right measures should be taken by the decision-makers in the country not just individuals," Abdel-Baseer told TNA.

"The Rosetta Stone has gifted mankind with a rich history that nobody knew about earlier than its discovery," he reflected.

"Before it was first discovered in 1799, all attempts to translate or decipher ancient Egyptian historic manuscripts into a known, modern language were unsuccessful and depended only on hypothesis and trial and error," he explained.

A British 'shame': Demanding the return of the Rosetta Stone

During the French invasion of Egypt, military leader Napoleon Bonaparte's forces unearthed the stone, while digging in Fort Julien near the city of Rasheed (Rosetta) in the Nile Delta. At that time, historians believed the stone was likely used as a building material.

The French troops then sent the stone to Cairo after realising its significance. By assuming that the texts would share the same meaning, French historian and linguist Jean-François Champollion managed to decipher the ancient Egyptian Hieroglyphs, before he shared his discoveries crucial to understanding them in 1822.

When the French were defeated by the British in Egypt in 1801, they signed the Treaty of Alexandria, which ruled that the stone, alongside other Egyptian antiquities, should be handed to Britain.

In 1802 the stone arrived in Portsmouth and at the bequest of King George III. It has been installed at the British Museum in London since then.