'Doomsday Clock' moves closest ever to midnight
World
3 min read
The New Arab Staff & Agencies
The Bulletin of the Atomic Scientists said it was advancing the hands of the clock by 10 seconds this year 'due largely but not exclusively to Russia's invasion of Ukraine and the increased risk of nuclear escalation'. 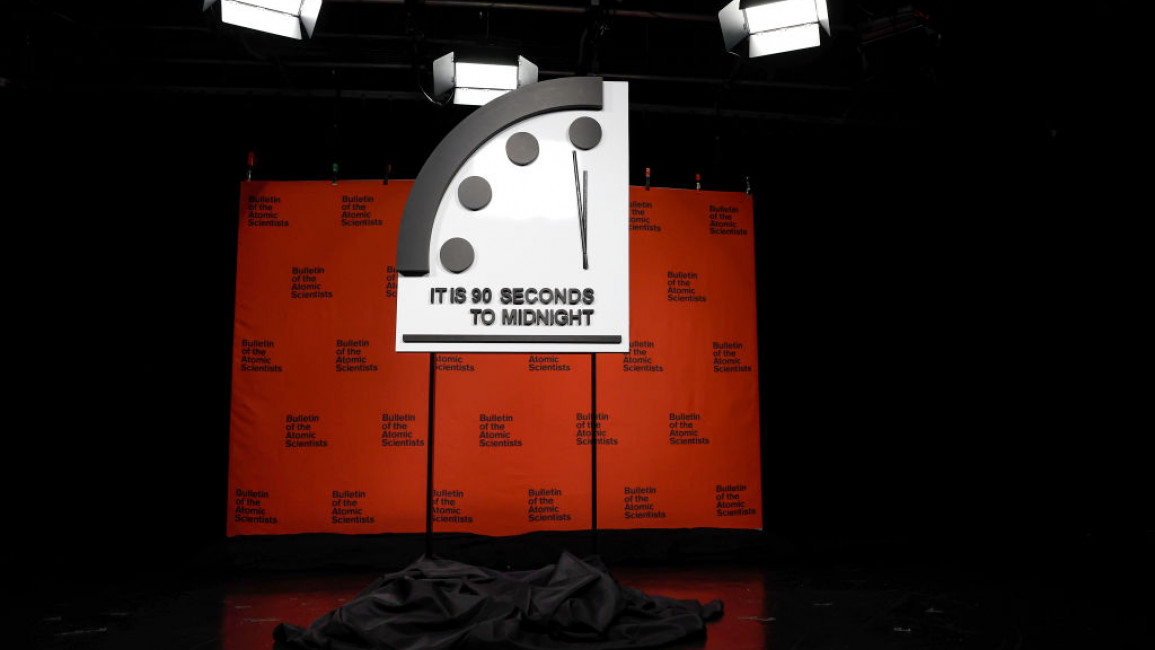 Top scientists and security experts moved the "Doomsday Clock" forward on Tuesday to just 90 seconds to midnight – signalling an increased risk to humanity's survival from the nuclear shadow over the Ukraine conflict and the growing climate crisis.

The new timing of the clock set by the Bulletin of the Atomic Scientists is closer to midnight than ever before.

The hands of the clock, which the Bulletin describes as a "metaphor for how close humanity is to self-annihilation", had been at 100 seconds to midnight since January 2020 – the closest to midnight it had been in its history.

A decision to reset the hands of the symbolic timepiece is taken each year by the Bulletin's science and security board and its board of sponsors, which includes 10 Nobel laureates.

In a statement, the Bulletin said it was advancing the hands of the clock by 10 seconds this year "due largely but not exclusively to Russia's invasion of Ukraine and the increased risk of nuclear escalation".

"Russia's thinly veiled threats to use nuclear weapons remind the world that escalation of the conflict – by accident, intention, or miscalculation – is a terrible risk," it said.

"The possibility that the conflict could spin out of anyone's control remains high."

The Bulletin said the new clock time "was also influenced by continuing threats posed by the climate crisis and the breakdown of global norms and institutions needed to mitigate risks associated with advancing technologies and biological threats such as Covid-19".

"We are living in a time of unprecedented danger, and the Doomsday Clock time reflects that reality," said Rachel Bronson, president and CEO of the Bulletin of the Atomic Scientists.

"90 seconds to midnight is the closest the clock has ever been set to midnight, and it's a decision our experts do not take lightly," Bronson said.

"The US government, its NATO allies and Ukraine have a multitude of channels for dialogue," she said.

"We urge leaders to explore all of them to their fullest ability to turn back the clock."

Former UN Secretary-General Ban Ki-moon also called for world leaders to take action in a world that has become more dangerous because of Covid-19, extreme weather events and "Russia's outrageous war on Ukraine".

"Leaders did not heed the Doomsday Clock's warnings in 2020," Ban said.

"We all continue to pay the price. In 2023 it is vital for all our sakes that they act."

"We have had enough of the Doomsday Clock warnings being followed by inaction," ICAN executive director Beatrice Fihn said in a statement.

"The leaders of the nuclear armed states must urgently negotiate nuclear disarmament, and the G7 meeting in Hiroshima in May 2023 is the perfect place to outline such plan," Fihn said.

The clock was originally set at seven minutes to midnight.

The furthest from midnight it has ever been is 17 minutes, following the end of the Cold War in 1991.

The Bulletin was founded in 1945 by Albert Einstein, J. Robert Oppenheimer and other scientists who worked on the Manhattan Project which produced the first nuclear weapons.

The idea of the clock symbolising global vulnerability to catastrophe followed in 1947.