Cost new obstacle to oil transfer from Yemen tanker, UN says
MENA
4 min read
The New Arab Staff & Agencies
UN deputy spokesman Farhan Haq said the availability of very large crude oil tankers 'has decreased in the past six months, basically due to events having to do with the war in Ukraine'. 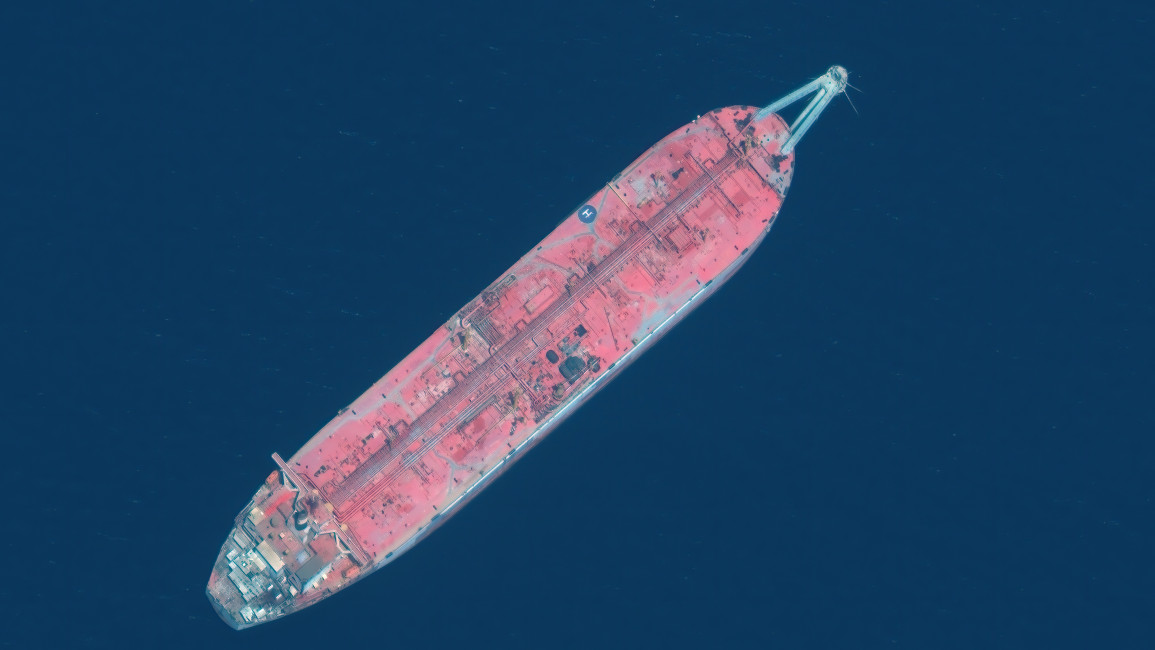 The rising cost of purchasing or leasing a vessel that can hold more than one million barrels of crude oil now in a rusting old tanker off the coast of war-torn Yemen is the latest obstacle to resolving the grave threat of massive environmental damage from a possible oil spill or explosion, the UN said on Tuesday.

UN deputy spokesman Farhan Haq said the availability of very large crude oil tankers "has decreased in the past six months, basically due to events having to do with the war in Ukraine".

He said just as the UN was finally gearing up its operation to transfer oil from the FSO Safer tanker, the cost of buying a very large crude oil carrier is now about 50 percent more than what was budgeted in the original UN plan, and the leasing cost has also increased.

"So we have some additional expenses, and it's a little bit harder finding the right ships, but we're proceeding with the work," Haq said.

He said donors have generously pledged more than $84 million of the funding required, and additional funding from the private sector is expected soon.

Haq said more than $73 million of pledges has been disbursed and essential preparatory work has begun.

"All of the technical expertise is in place to undertake the procurement for the complex operation," he said.

"This includes a marine management consultancy firm, maritime legal firm, insurance and ship brokers and oil spill experts" as well as contracting a salvage company that will carry out the emergency operation which is at an advanced stage.

"However, the key challenge at present is procurement of a very large crude carrier," Haq said.

"The UN cannot begin the emergency operation until it is certain that a safe crude carrier will be in place to take on the oil."

He said the UN is working with a maritime broker and other partners "to find a workable solution and remains confident the work can begin in the coming months".

The United Nations and Yemen’s Houthi rebels signed a memorandum of understanding last March aimed at resolving the environmental threat posed by the Safer tanker to the Red Sea.

The Safer tanker is a Japanese-made vessel built in the 1970s and sold to the Yemeni government in the 1980s to store up to three million barrels of export oil pumped from fields in Marib, a province in eastern Yemen that is currently the scene of limited fighting. The ship is 360 meters (1,181 feet) long with 34 storage tanks.

Yemen's devastating conflict began in 2014, when the Iranian-backed Houthis seized the capital, Sanaa, and much of northern Yemen and forced the government into exile.

A Saudi-led coalition including the United Arab Emirates intervened in 2015 to try to restore the internationally recognised government to power.

The U.N. still has to persuade all donors to pay up on pledges for the first $75 million phase of the emergency removal operation to begin, warned the UN: https://t.co/kPIJIpXBpl

A UN-backed truce took effect in April 2022 and raised hopes for a longer pause in fighting, but it ended on 2 October after just six months.

UN special envoy Hans Grundberg told the Security Council on Monday that despite the end of the truce, "the overall military situation in Yemen has remained stable" with no major escalation or changes to frontlines despite some limited military activity.

The Houthis control Yemen's western Red Sea ports, including Ras Issa, just 6 kilometres (about 4 miles) from where the Safer is moored.

Internal documents obtained by The Associated Press in June 2020 showed that seawater had entered the engine compartment of the tanker, causing damage to the pipes and increasing the risk of sinking.

According to the AP report, experts said maintenance was no longer possible because the damage to the ship was irreversible.

The United Nations, the United States and other governments, as well as Greenpeace and other international organisations have warned for years that a major oil spill – or explosion – could disrupt global commercial shipping through the vital Bab el Mendez and Suez Canal routes, causing untold damage to the global economy.