The death of Keenan Anderson, a black man tased 6 times by the LAPD, highlights yet again that Martin Luther King’s dream is yet to become a reality. The struggle against racism and state brutality continues in the US, writes Richard Sudan. 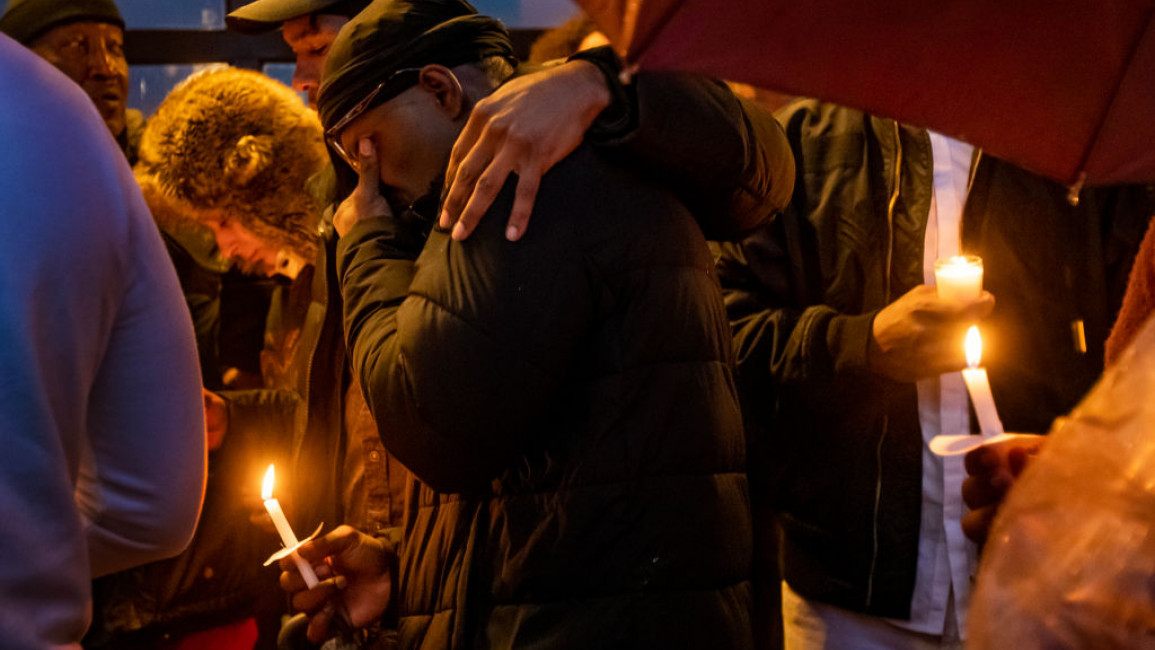 Family members console each other at a vigil for Keenan Anderson who was killed after being tased by LAPD following a traffic collision earlier this month January 14, 2023 in Venice, California. [GETTY]

Anderson, who had flagged down the police after being in a traffic collision, was tasered six times during his arrest, with 50,000 volts administered each time.

Despite multiple officers present at the scene, and despite Anderson appearing physically and mentally unwell during his arrest, officers in charge of his safety chose to use force to subdue him.

The 31-year-old teacher, who was unarmed, cried out “they’re trying to George Floyd me” as he begged the armed officers to stop. They did not.

''Anderson calling out the name of George Floyd, whose murder at the hands of Derek Chavin in Minneapolis sparked global solidarity protests, while galvanising anti-racist movements the world over, serves as a bitter reminder of just how little has changed in years which have followed millions marching for justice.''

If ever a moment captured the endemic rot at the heart of US policing, the killing of Anderson is it.

The fact it happened days before MLK Day was poignant. Martin Luther King had a dream, but black people in the US are still living in his nightmare.

Anderson calling out the name of George Floyd, whose murder at the hands of Derek Chavin in Minneapolis sparked global solidarity protests, while galvanising anti-racist movements the world over, serves as a bitter reminder of just how little has changed in years which have followed millions marching for justice.

Keenan Anderson was also the cousin of Patrisse Cullors, co-founder of Black Lives Matter (BLM), a movement that has been fighting against such fate for black people since 2013.

Even the response to this tragic loss has reinforced the systematic nature of black men being killed in the hands of the state. The victim blaming of Anderson soon followed the news of his death, with the LAPD claiming he had drugs in his system. They have been accused of smearing his name.

Whilst all of the above accusations can be challenged, let’s be clear; even if true, none justify the treatment Anderson received, or warrant a death sentence. Instead, he should have been escorted to the support services he needed.

As Cullors pointed out: “My cousin was asking for help, and he didn’t receive it. He was killed”.

His cousin’s pain is palpable and will resonate with all those families who have lived through the loss of loved ones in the custody of institutions which are supposed to preserve life, but which instead, view black lives as expendable and less-deserving of humane treatment.

Racist policing in the US

Studies have repeatedly shown the racial disparities in US policing. Despite making up less than 14% of the population, black people are 3 times more likely than white people to die at the hands of the police.

This situation creates a life or death lottery whenever black people encounter the police. In fact, under Biden’s presidency, 2022 was one of the deadliest years for police killings.

“The cold and callous way Black life is handled by those sworn to protect and serve is indicative of the staying power of white supremacy and systemic racism, which is the foundation of these yet-to-be United States,” remarked US civil rights activist, Bishop Talbert Swan.

He also pointed out: “Instead of compensating the descendants of enslaved Africans who built the nation, America continues to pay settlements to bereaved families grieving the loss of loved ones killed by law enforcement.”

The US not only has a long-standing historical bill to pay for the injustice black people were dealt for over 400 years of slavery, but it is also mounting another over the killings of black people at the hands of its authorities today.

The settlements mentioned, which have been paid out to families as a result of alleged police misconduct and civil rights violations, come to a staggering figure. According to a study by the Wall Street Journal, the state of New York alone has paid out $1.1 billion dollars since 2015.

Los Angeles, where Keenan Anderson was killed, paid out almost $240 million in the same period.

All of this leads us to a simple conclusion. Police reform and accountability must become a reality and the groundwork is urgently needed from now. Rogue police officers must also be held to the same standards of the law as everyone else.

Furthermore, defunding the police is not a notion to be entertained during election time, it should be treated as critical demand.

Honouring Martin Luther King means more than evoking his memory. It requires continuing his radical and relentless efforts for justice, equality and freedom. Whilst Anderson’s tragic death understandably leaves many of us feeling powerless and depleted, through the pain and rage we must fight to make a reality the hope that a change is gonna come.