With loose definitions of anti-Semitism, German media launches a witch-hunt against pro-Palestine voices

In Germany's witch-hunt against Arab journalists, accusations of anti-Semitism are weaponised to silence pro-Palestinian voices. This conflation of anti-Semitisim and anti-Zionism is a defining trait of German public discourse, writes Matt Unicomb. 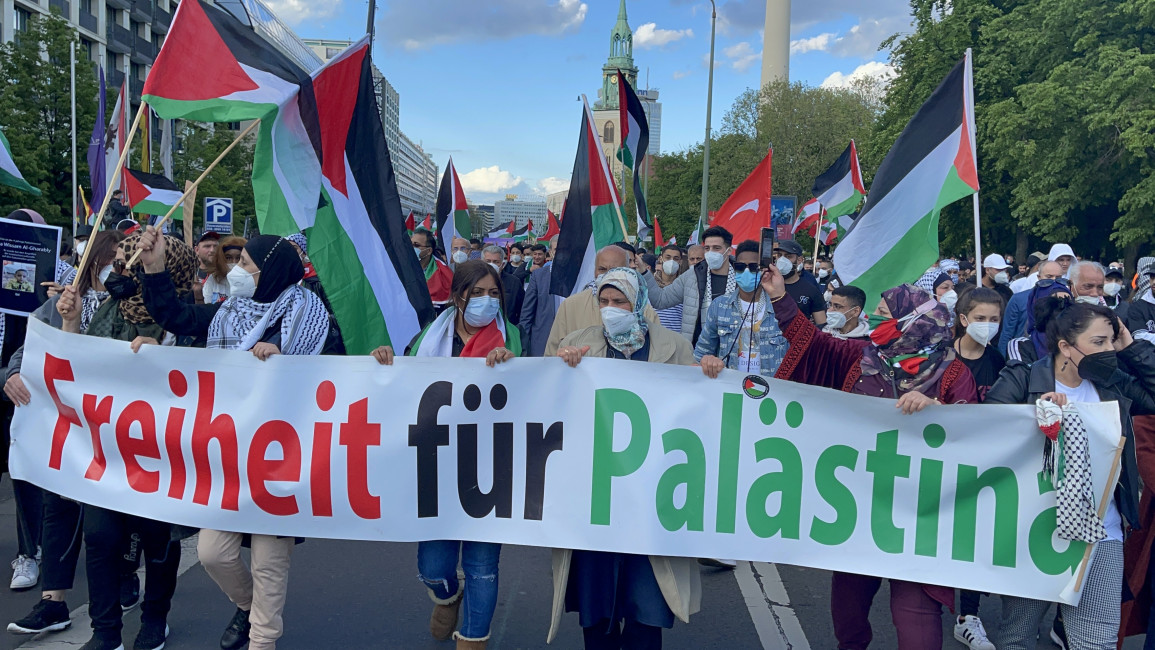 Demonstrators hold a banner that reads "Freedom for Palestine" at a protest against Israeli attacks on the Gaza Strip in Berlin, Germany on May 19, 2021. [Getty]

By highlighting the German media’s “Anti-Arab purge” in a recent statement, Euro-Med Human Rights Monitor gave a name to something that has been occurring in this country for years: a particularly German obsession with using anti-Semitism accusations to silence Arab voices.

The inability, or refusal, to distinguish between anti-Semitism, anti-Zionism and pro-Palestinian positions is one of German public discourse’s defining traits, as journalists and politicians obsess about anti-Semitism within migrant communities, rather than accurately reporting news related to Israel-Palestine.

The two recent cases that caught Euro-Med Human Rights’s attention are just the latest in a long line of campaigns against Arab journalists and activists from all sides of German politics.

In September, the prize-winning German-Palestinian journalist Nemi El-Hassan was stood down from and eventually stripped of her role as a moderator on a science-themed programme on public TV station Westdeutscher Rundfunk.

"The inability, or refusal, to distinguish between anti-Semitism, anti-Zionism and pro-Palestinian positions is one of German public discourse’s defining traits"

Her downfall was triggered by a photo of her at a 2014 pro-Palestine rally, resurfaced by the right-wing, fiercely anti-immigrant tabloid BILD. According to media reports from that time, some rally attendees shouted anti-Semitic slogans. No one claimed El-Hassan was one of these people, but she quickly apologised and called her attendance a mistake. Over 400 prominent writers, artists and academics signed an open letter supporting El-Hassan, but its impact was minimal.

“The anti-Semitism discourse in Germany, as far as I can tell, doesn’t do a lot to actually protect Jews,” German-Jewish journalist Fabian Wolf, one of the letter’s signees, told me last year.

Investigations showed that the photo of El-Hassan could be traced to a far-right YouTuber and self-described “Islamist hunter”, who shared it a month before BILD’s story.

After that story broke, journalists spent hours trawling El-Hassan’s Instagram history, eventually finding the information that sealed her supposed guilt: she had liked pro-Palestinian posts by Jewish Voice for Peace.

#Germany| Targeting, singling out and smearing of Arab and Palestinian journalists in German media poses a serious risk to freedom of speech and expression.https://t.co/USJO005aNB

The story’s author, Moritz Baumstieger, analysed 15 years of social media activity from a number of DW employees and collaborators, eventually highlighting a handful of already deleted posts to publish. Other news outlets, like Vice and Der Spiegel, soon began investigations of their own, blasting Arab journalists for using terms like "settlers of the Israeli occupation".

Anti-Semitic posts such as the alleged Holocaust denial should be condemned and rightfully lead to dismissal in any journalistic workplace. The same goes for the promotion of anti-Semitic conspiracy theories, which one of the DW employees allegedly spread.

But other supposedly anti-Semitic posts include calling the IDF a “barbaric war machine”. What else do you call an army that sadistically aims sniper bullets at the knees of teenage Palestinian protestors?

Further investigation of the situation by Euro-Med Monitor showed that journalists had misrepresented at least one journalist’s views by selectively quoting from two articles she wrote in 2015.

In Germany, some see support for Palestine as anti-Semitic

DW moved quickly to address Süddeutsche Zeitung’s report, aiming to distance itself from any accusations of anti-Semitism. Dozens of stories in publications across Germany have since discussed DW’s “anti-Semitism problem”.

Only in Germany could an operation like DW be accused of anti-Semitism. The broadcaster’s English and German news arms are both staunchly pro-Israel, and have been accused of censoring pro-Palestinian voices.

In May 2021, as Israeli fighter jets bombed Gaza, DW took down and apologised for an interview with Palestinian-American journalist Ali Abunimah, who said Palestinian children were “sick of paying the price for guilty German consciences”.

Abunimah was treading on dangerous ground. “Germany stands by Israel” read one DW headline a few days earlier. At the time, DW sent around a company-wide memo reminding staff to avoid terms like “colonisation” and “apartheid” when mentioning Israel.

"Palestinians are notably absent from German-language discussions about Israel-Palestine, shut out by journalists and commentators desperate to impose their isolated worldview"

In May, Tagesspiegel and countless other papers pondered a question: “Do Muslims disrupt Germany's “never again” identity?”

Journalists and politicians even suggest that post-2015 migrants have “imported anti-Semitism” to Germany, the country that committed history’s most brutal genocide.

Partially due to Germany’s unique “remembrance culture”, an alarming number of non-Jewish, German journalists view themselves as authorities on anti-Semitism. They believe they have the right to smugly lecture Palestinians (and Israelis) about the nature of the Israeli occupation, even suggesting Palestinian migrants to Germany have a newfound responsibility for Israel’s security.

“It’s quite a perverse notion that the perpetrator of the crime… is the one with the ultimate authority of the crime,” Nadim, a German-Palestininan host on the 99 Zu Eins podcast, said in an conversation about anti-Semitism last September. “Because it learned from its mistakes and can now dictate the discourse to everybody else.”

Accusing journalists or activists of anti-Semitism is a convenient way to discredit their work. Without fail, any flurry of pro-Palestinian solidarity is immediately followed by accusations of anti-Semitism, no matter how peaceful. Fellow left-wing protestors even called the police on “Queers for Palestine” protestors in Berlin in 2019.

Reading about Israel-Palestine coverage in Germany can feel like stepping into an alternate reality, where a peaceful, benevolent state (Israel) faces existential threat from a superpower neighbour (Hamas) and young, anti-Semitic Arab men roam the streets.

The implications of this inaccurate reporting were laid clear in a 2021 survey of 10,000 Germans by the Hanns Seidel Foundation, which found that participants considered Islamism to be the main danger to Germany’s Jews.

In reality, however, right-wing extremists committed 95 percent of the 2,351 anti-Semitic incidents reported to police in 2020. Around 46 percent of those surveyed had never actually met a Jewish person, so it’s not hard to see why their perception was so misguided.

Palestinians are notably absent from German-language discussions about Israel-Palestine, shut out by journalists and commentators desperate to impose their isolated worldview. But as long as voices like Nemi El-Hassan continue to be silenced, why should we expect anything different?

Matt Unicomb is a news and culture journalist based in Berlin, where he's currently the online editor of Exberliner