'He paid a dear price, but it didn't break him': Karim Younes free after 40 years in Israeli prisons 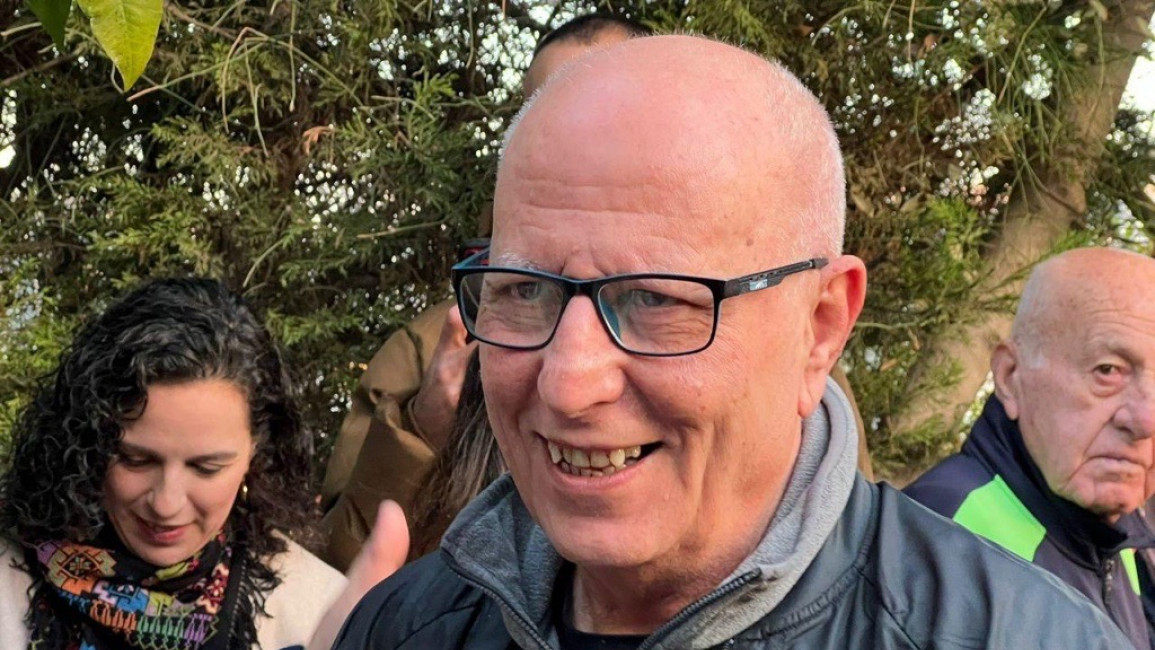 Karim Younes made his way to his hometown of Ara on Thursday after serving 40 years in Israeli jails. The 63-year-old remained behind bars more than any Palestinian prisoner.

Speaking to a reporter, the former prisoner appeared in good spirits.  "Forty years have passed..and I would have sacrificed another forty years for the liberty of our people," he said.

In 1983, an Israeli court sentenced Karim Younes to life for the 1980 killing of Avraham Bromberg, an Israeli soldier.

He was also convicted of membership in the Fatah movement, banned at the time, and illegally possessing weapons.

In 2017, Palestinian president Mahmoud Abbas selected Karim Younes to be a member of the Fatah Central Committee.

After spending 40 years unlawfully behind the Israeli occupation’s bars, Karim Younes, one of the longest serving Palestinian political prisoners, was released today. His freedom has been long-deserved and long-awaited. pic.twitter.com/mEizWu0xtg

Israeli forces transported Karim Younis from Hadarim prison to the city of Raanana, some 57 kilometres away from his home in Ara.

"The prisoners are strong, and their strength lies in their unity...God willing they'll be free, all of them. Now I wait for the release of Maher Younes," Karim told reporters.

Maher Younes, Karim's relative, was convicted and sentenced on the same counts. He is set to be released soon.

Days before his discharge from Hadarim prison, Karim wrote a letter expressing mixed emotions about leaving comrades behind and yearning for liberation.

"I will leave my cell, but my soul will remain with those who have kept the struggle for Palestine," he wrote.

Karim's first stop in Ara was the cemetery where his parents were buried.

RT @swilkinsonbc "The last time Karim Younes was outside he was 24: today he is 64yrs-old — released from israeli jail, his first visit is to his parent's graves pic.twitter.com/0NtfcUS7Uf"

Aryeh Deri's declared intent to revoke the Israeli citizenship of the former prisoner has some legal ground, according to the Haifa-based law expert Sawsan Zaher.

In 2008 the Israeli Knesset amended the citizenship law allowing the interior minister to revoke the citizenship of individuals convicted of 'terror' acts. However, there may be difficulties in actually cancelling Karim's status since he has no other citizenship.

"There is no doubt that Deri is using his powers out of pure racism and for vengeance and political gains," Zaher told TNA.

Abdel Fattah Doula, 44, a former Palestinian prisoner in Israeli jails (2004-2016), met Younes in Hadarim in the final years of his sentence. Doula lives in Ramallah and is also a member of Fatah.

"He's one of the unique comrades. We viewed him as a beacon of hope and steadfastness," Doula told TNA.

"We feel victorious. True he paid a dear price, but it didn't break him. He showed that liberty is attainable, even if it takes long to arrive," he added.