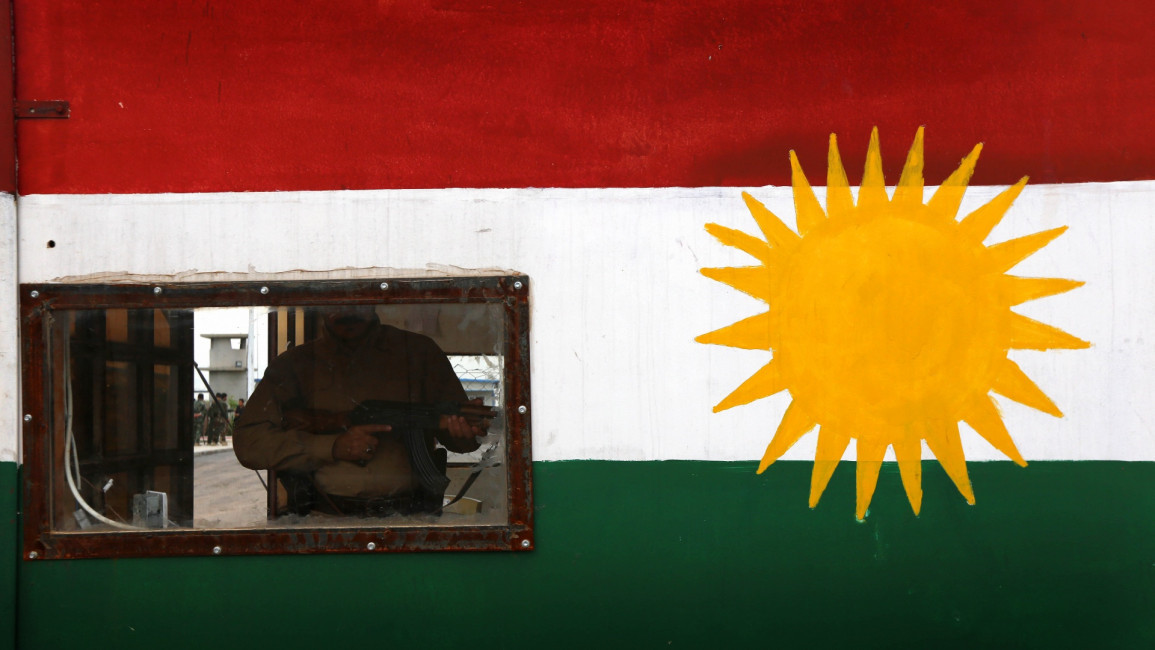 Tensions between the two main Kurdish ruling parties in the Iraqi Kurdistan region, the Kurdistan Democratic Party (KDP) and the Patriotic Union of Kurdistan (PUK), are worsening in the aftermath of the assassination of a counter-terrorism officer.

Hawkar Abdullah Rasoul, known as Hawkar Jaff, a former colonel in the ranks of PUK's Counter-Terrorism Group (CTG), was killed in the capital city of Erbil on 7 October after a sticky bomb attached to his vehicle detonated. The KDP accuses its rival party, the PUK, of being behind the killing.

Bafl Talabani, PUK's president, during an interview with Rudaw Kurdish satellite channel aired on Tuesday night, said that as a consequence of the killing arrest warrants have been issued by an Erbil court against himself and his brother, Qubad Talabani, the Deputy Prime Minister of the Kurdistan Regional Government (KRG).

Although both parties run the KRG together, the KDP is dominant in Erbil and Duhok provinces, while the PUK rules Sulaimaniyah and Halabja provinces. The two parties also conflict over how the region's oil revenues are distributed. Both parties have their separate peshmerga forces, security and intelligence agencies. They fought an internal conflict from 1994 until 1998, in which thousands of fighters and innocent civilians from both sides were killed, wounded and displaced.

Talabani refuted any involvement from his party in the killing and indicated that courts in the Kurdistan region are under the hegemony of the ruling parties. He cautioned that if the disagreements with the KDP will not be resolved through dialogue and understanding, his party might think of withdrawing from the KRG and setting up a separate administration in areas under its control.

"Where in the world does a government let a mafia, protected by a political party, move forces against the house of it is own deputy PM? This happened here," Talabani said in response to why his brother (Qubad) is boycotting the meetings of the KRG council of ministers.

Azhi Amin, the former head of PUK’s intelligence agency (Zanyari) left Sulaimaniyah to live in Erbil after he was sacked from his post. PUK is accusing Amin of raiding Qubad's house in Erbil, following a similar raid by PUK security forces on Amin's house in Sulaimaniyah city.

PUK's leader clarified that during the raid their forces confiscated thousands of confidential and secret documents owned by Zanyari at Amin's house. He said that Amin has stolen secret documents and taken them to Erbil.  Amin denied the allegations.

#PUK's @Bafeltalabani 'suspects meddling "hands" of being responsible for the heightening disputes between his party and the #Kurdistan Democratic Party (#KDP) in recent times', in an interview with @Rudawkurdish's Shaho Amin. #Iraq #Baghdadhttps://t.co/yEZalOEysh

He also expressed suspicion that 'meddling hands' are behind deteriorating disputes between his party and the KDP. He said that the KDP is not sending a fair share of oil revenues, medicine, and peshmerga salaries to Sulaimaniyah. His words might be an indirect reference to the KRG Prime Minister Masrour Barzani, who is a leading figure within the KDP.

He said that PUK is ready to negotiate the redistribution of all incomes across the region, and his party is ready to hold parliamentary elections as soon as possible, provided that the voter list is refined from dead and ghost names.   "I have recently told the foreign diplomats in Erbil that there would be no civil war between the KDP and the PUK," Talabani said.

Jaff was supervising the CTG operations in Nineveh and was fired in the summer of 2021 due to an internal issue between cousins Bafel Talabani and Lahur Talabani - then co-leaders of PUK, as Jaff was a close ally to Lahur.

Kurdistan Region Security Council (KRSC), a body controlled by the KDP, on 12 October aired alleged confessions of six suspects in the killing. The KRSC claimed that the "terrorist explosion" was "conducted by a team of CTG-Sulaymaniyah and by direct orders from the head of CTG Wahab Majid Baqi, known as Wahab Halabjayi, and CTG head of intelligence Karzan Muhammad Rasheed."

Accordingly, an Erbil court has issued arrest warrants against Halabjayi, Rasheed, and senior PUK officials. The CTG denied any involvement in the killing of Jaff.

PUK is a major Kurdish political party and a member of the Socialist International Organization. It was founded in 1975 by several Kurdish politicians, including Jalal Talabani, who became the party's secretary-general and then president of Iraq. Talabani died in October 2017.

PUK members elected Lahur Jangi and Bafel Talabani, the nephew and elder son of late Talabani, respectively, as co-leaders of the party in 2020.