Forcible transfer: Israeli politicians renew threat to raze Khan Al-Ahmar
MENA
4 min read
Ibrahim Husseini
Jerusalem
The Jahalin, a Bedouin clan, lived in Tel Arad in the Naqab desert until Israel expelled them in 1951. They've been living near Jerusalem ever since but now Israel wants them to "relocate." 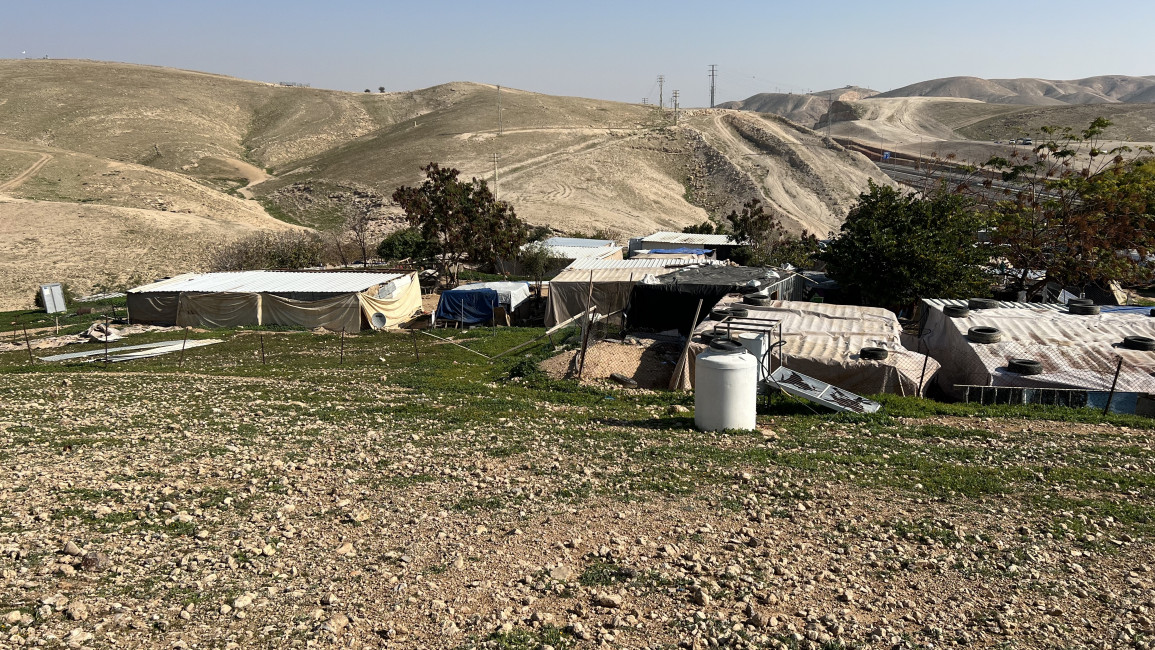 Supporters for the beleaguered Palestinian Bedouin village of Khan Al-Ahmar are back, and so are extremist Jewish settlers and Knesset members from the ruling Israeli coalition after renewed calls by members of the Israeli government to demolish the homes of some 300 Palestinian Bedouin men, women and children near occupied East Jerusalem.

The Israeli government said it would announce the village demolition date in two weeks.

In 2018, Israel's high court ruled that the residents of Khan Al-Ahmar may be evicted but did not set a date for the eviction.

Recently, Israel's far-right national security minister Itamar Ben-Gvir called for the destruction of the Khan Al-Ahmar after the Israeli army removed a settler outpost near Nablus.

"I will demand the immediate eviction of Khan Al-Ahmar. A law is a law, and I will in no way accept a situation where only Jewish outposts are enforced and destroyed while the Arabs continue to build illegally throughout Judea and Samaria," Ben-Gvir tweeted.

These are the school children of Khan al-Ahmar. Israeli MKs are currently pushing for their forcible transfer. Photo: Sarit Michaeli (B’Tselem), January 23, 2023 pic.twitter.com/twaK2fBOK1

Eid Khamis, a Bedouin leader, told The New Arab that Itamar Ben-Gvir and Bezalel Smotrich wish to "cleanse Khan al-Ahmar and all of Area C" in the occupied West Bank.

"But we will stay on our land...if they demolish, we will rebuild," he added.

Speaking from a hill overlooking the Bedouin village, former Israeli ambassador to the UN and Likud MK Dany Danon said that the international community would not dictate policy in Israel.

On Sunday evening, Danon urged fellow Likud members to join him on tour for the Khan Al-Ahmar, apparently to push the government to set a date for demolishing the Bedouin village.

"Strategically, we want to make sure that we will keep this land," he told Israel's i24.

Yuli Edelstein, a Likud MK, was also there. Both Danon and Edelstein are seen as opposition within the Likud to Netanyahu. Edelstein is reportedly bitter because he was not given a ministerial post in the new government.

"The sooner the action is taken, the less problem it will create because, as we see right now, additional forces are joining them," Edelstein said.

Khan Al-Ahmar and other encampments were established near Jerusalem after Israel expelled several Bedouin communities from their homes in the Naqab desert in the 1950s.

As a result, they were forced to cross the armistice line into then-Jordanian-controlled areas.

The famous Bedouin encampment in Khan Al-Ahmar lies adjacent to Jerusalem's historic road with Jericho. It is now between two Jewish settlements, Maale Adumim to the east and Kfar Adumim to the west - both considered illegal settlements were built after Israel occupied the West Bank in 1967.

The Jahalin, a Bedouin clan, traditionally lived in Tel Arad in the Naqab desert. In 1951 the Israeli army ordered them out.

UN officials have warned that demolishing Khan Al-Ahmar would amount to forcible transfer, a war crime under international humanitarian law.

In October 2018, Israel, under prime minister Benjamin Netanyahu came very close to executing the demolition of Khan Al-Ahmar. However, pressure from supporters on the ground and globally, including opposition from many European governments, and UN bodies, led Israel to reconsider.

Many activists who arrived in Khan Al-Ahmar on Monday morning believe that the composition of the new Israeli government makes the possibility of demolition highly probable.

"Our reading is that this right-wing government may go forward with this dangerous act, and therefore we are back to repel its plans," said activist Abdullah Abu Rahmeh.

When TNA asked Abu Rahmeh what would happen if Israel destroyed the village, his answer was unwavering.

"We will boost their steadfastness...provide them with material to rebuild."

Azzam Al-Ahmad, a Fatah leader and member of the PLO executive committee, was also present among the dozens of supporters.

Speaking to a group of journalists, al-Ahmad warned Arab governments against normalising relations with Israel, referring directly to the Abraham Accords and the current preparations in Abu Dhabi for holding the next Negev Forum summit in Morocco.

Al-Ahmad also revealed that the Americans had told Palestinian officials they'd relayed to the Israelis to stay away from Khan al-Ahamr.

"We say we do not want words and promises; we want implementation on the ground. A Palestinian State, independent, on all Palestinian land that was occupied on June 5, 1967, and Jerusalem as its capital," he added.