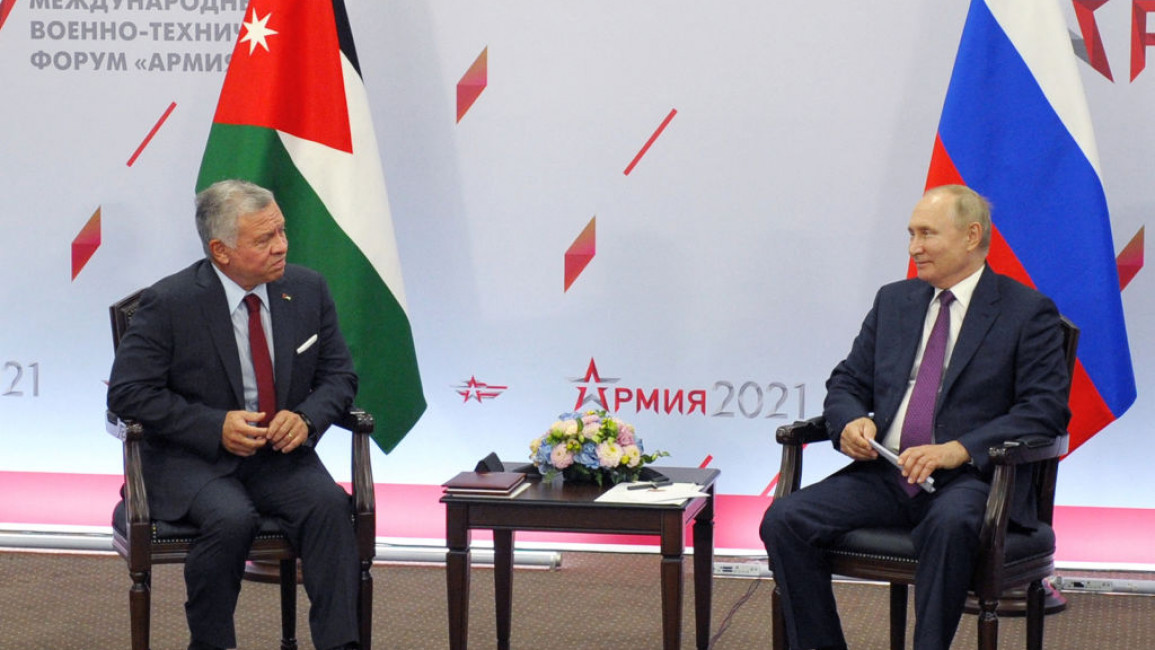 King Abdullah II of Jordan met with Russian President Vladimir Putin in Moscow on Monday, where they discussed the latest developments in Syria and Afghanistan.

The readout from the meeting was brief, but in his public remarks, King Abdullah thanked Russia for playing "the most stable role" in resolving challenges in Syria. For his part, Putin said the two would discuss "normalising the situation in Syria".

As the two heads of state met, Syrian regime forces and its allied militias were surrounding the opposition city of Daraa Al-Balad - not far from the Jordan border - in preparation for a midnight assault.

Regime forces have maintained a siege on Daraa Al-Balad for over two months following the residents' rejection of the widely-condemned Syrian presidential elections.

In late July, the siege erupted into open hostilities as regime soldiers attempted to storm the city and opposition elements rebuffed their assault.

Since then, opposition elements have overrun a number of regime security checkpoints while the regime has shelled the city on a near-daily basis. Supplies such as wheat are running desperately low in the besieged opposition enclave.

The conflict, located on Jordan's northern border, upset plans to reopen commercial ties between Syria and Jordan. The Nassim-Jaber border crossing between the two countries was closed after opposition fighters cut off the Amman-Damascus international highway - just days after reopening.

The renewal of the border crossing came after a call between Jordan's minister of interior and his Syrian counterpart. In weeks prior, Jordan has moved to reinvigorate trade ties with its northern neighbour reportedly seeking out US permission to do so during King Abdullah's visit to Washington in July.

Russia is mediating in negotiations between the regime and opposition elements in Daraa in its capacity as guarantor of the so-called reconciliation deal which allowed the regime to recapture southern Syria in 2018.

Russian mediation has reportedly held back the regime from launching an all-out assault on Daraa Al-Balad.

Such an assault would likely rely heavily on pro-Iranian militias, a worrisome development for Jordan which has expressed worries in the past about the presence of Iranian elements on its northern border.

King Abdullah also noted Russia's "stabilising role in Syria", and called for a "political solution to the Syrian crisis that (…) guarantees the safe return of refugees".