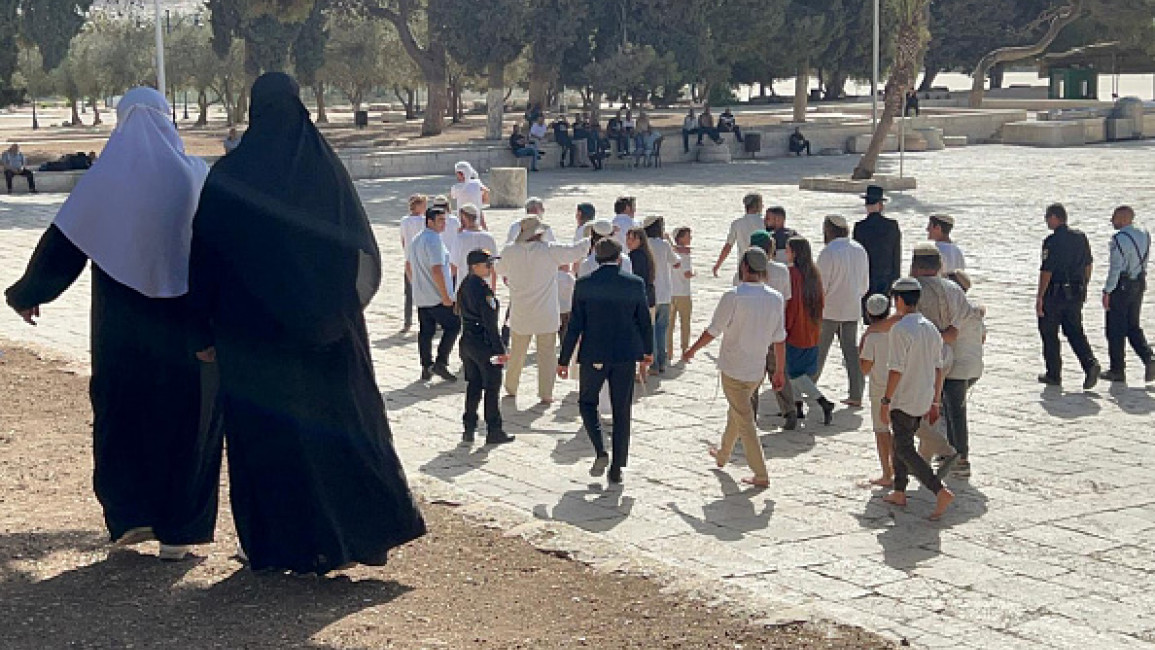 Israeli settlers stormed the Al-Aqsa Mosque compound in occupied East Jerusalem and Hebron's Ibrahimi Mosque on Sunday, causing outrage among Palestinians through a series of provocative acts at the holy sites.

In one video, a woman is reportedly seen dancing at the Ibrahimi mosque compound as settlers stormed the mosque, while music can be heard inside the holy site. Music is generally viewed as forbidden in Muslim places of worship.

Originally posted on the video-sharing app TikTok, a woman allegedly dances to pop music as she laughs in the video, provoking condemnation and anger from Palestinians who called it a "violation of the sanctity of the mosque".

Dozens of alleged settlers were seen at the Ibrahimi Mosque dancing and singing along to a band performing Talmudic rituals, according to the Palestinian radio station Al-Aqsa Voice, while others carried out similar rituals in the mosque's courtyard.

Watch| An Israeli settler brags about dancing inside the Al-Aqsa Mosque compound in occupied Jerusalem in violation of the sanctity of the Muslim holy site. pic.twitter.com/2fBKzazydt

The videos come as settlers photographed themselves outside Al-Aqsa days carrying out a series of provocative acts, according to the Palestinian Shehab Agency.

Palestinian holy sites were subject to an increased number of assaults by Israeli settlers in the last week of September, coinciding with Jewish holidays including the Rosh Hashanah new year.

Sunday's provocations occurred as dozens of settlers stormed the Al-Aqsa Mosque, which serves as the third holiest site in Islam, under the protection of the Israeli police, according to the Department of Islamic Endowments in Jerusalem.

Hebron's Ibrahimi Mosque, which is believed to be the burial site of the Prophets Abraham, Isaac, and Jacob, is also regularly targeted by Israeli settlers.

In 1994, the mosque was the site of a mass shooting when an extremist Jewish settler - Baruch Goldstein - murdered 29 Palestinian worshippers and injured 125.

The Old City of Hebron is home to approximately 40,000 Palestinians but has a large and militant Israeli settler population of around 850.