Iran kicks off Qatar 2022 World Cup divided by protests back home
MENA
4 min read
The New Arab Staff & Agencies
Iran, a nation of 80 million people, is normally united by football but is reeling after two months of nationwide protests since the death of Mahsa Amini in morality police custody on 16 September. 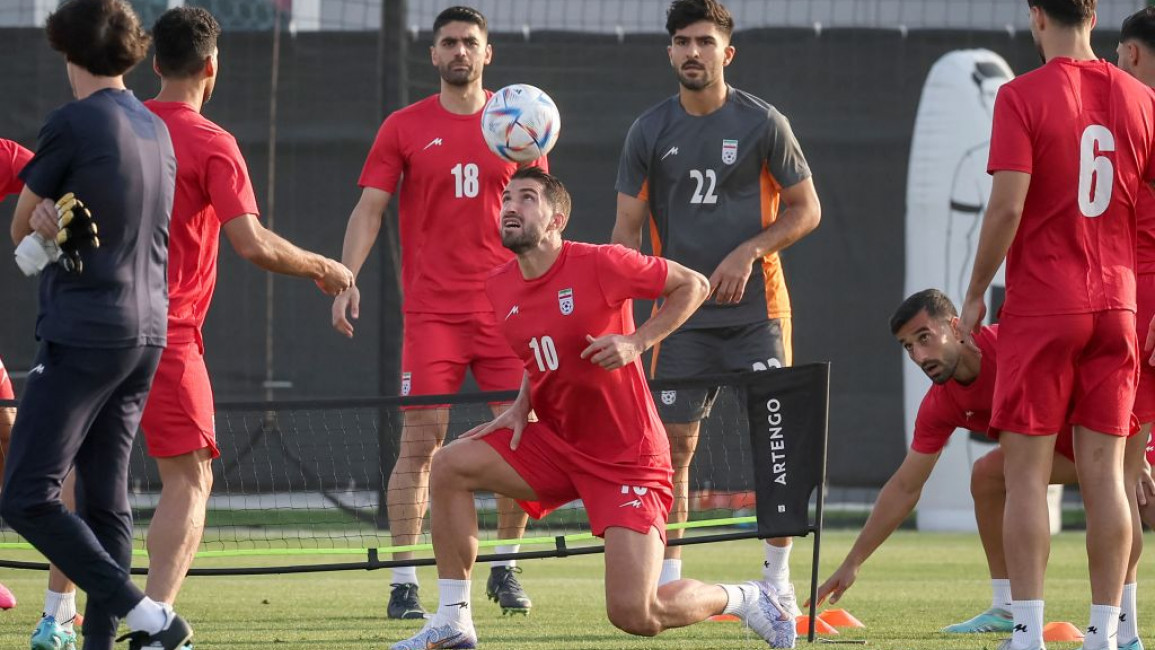 Iran's opening World Cup match against England on Monday is likely to be overshadowed by a deadly crackdown on women-led protests back home.

The nation of 80 million people is normally united by football but is reeling after two months of nationwide protests since the death of Mahsa Amini in morality police custody on 16 September.

Amini, a 22-year-old Kurdish Iranian died three days after her arrest in Tehran over an alleged breach of the Islamic Republic's dress code for women, which includes the mandatory hijab headscarf. Her Kurdish first name can be spelt "Zhina" or "Jina".

The state's response has led to questions over whether the team represents Iran or the regime that has ruled with an iron fist since the Islamic Revolution of 1979.

Players have faced calls from activists to use the World Cup to show solidarity with those killed during the protests, with attention on the playing of national anthems and celebrations.

Team captain Alireza Jahanbakhsh said on Thursday that the players were focused on the "biggest games of our lives", not the politics of the protests.

"What I'm trying to say is we are here to play football and that's the main thing everybody is focused on while we're here," said the Feyenoord winger.

Iran's squad boasts several stars who have played in Europe's top leagues and a respected coach in Carlos Queiroz of Portugal.

Asked whether the players would join other Iranian sports figures who have refused to celebrate their victories as a form of support for the protests, Jahanbakhsh said that was "something very personal".

"Every single player has a different celebration and you ask about the national anthem and that's something that also has to be decided in the team," he said.

In a World Cup warm-up game against Senegal in September, star striker Sardar Azmoun scored, but commentary focused on his muted celebration rather than his performance.

The entire team had remained wrapped in their black tracksuits during the pre-match anthems rather than exposing the national strip.

In another friendly, against Nicaragua earlier this month, just two players sang the national anthem – Vahid Amiri and Mehdi Torabi. The rest stood in silence.

Asked for his view on the singing of the anthem, coach Queiroz said the players had the "right to express themselves".

Before the Senegal game, protesters gathered outside the stadium in Austria pleading with the players to come out and express their support.

"We are here to just beg [the team] – please support us instead of standing against us," said one of the organisers, Mehran Mostaed.

"Sure there are consequences for a football player to express support… but for sure they have to face the consequences."

Earlier in the week, Iranian football bloggers had taken screenshots of an Instagram post from Azmoun saying that because of "restrictive rules… I could not say anything".

But he said he could not remain silent. "This will never be erased from our consciousness. Shame on you!" he wrote.

The account was later restored, and the Bayer Leverkusen striker appeared to apologise for his earlier post.

One of the biggest names in Iranian football, former national team star Ali Karimi, has become a hero to many protesters with his vociferous support on social media.

Former Iran goalkeeper Sosha Makani has gone further, demanding a ban on the team taking part in the World Cup.

"It's the Islamic republic's team not the Iranian people's team. FIFA should ban it," Makani said.

In Qatar, several Iran-based players have offered their condolences to the families of those killed, but they have stopped short of voicing support for the protests.

"I would like to extend my condolences to the families who have lost loved ones during the recent events and I would like them to know we are by their side," said reserve keeper Hossein Hosseini.