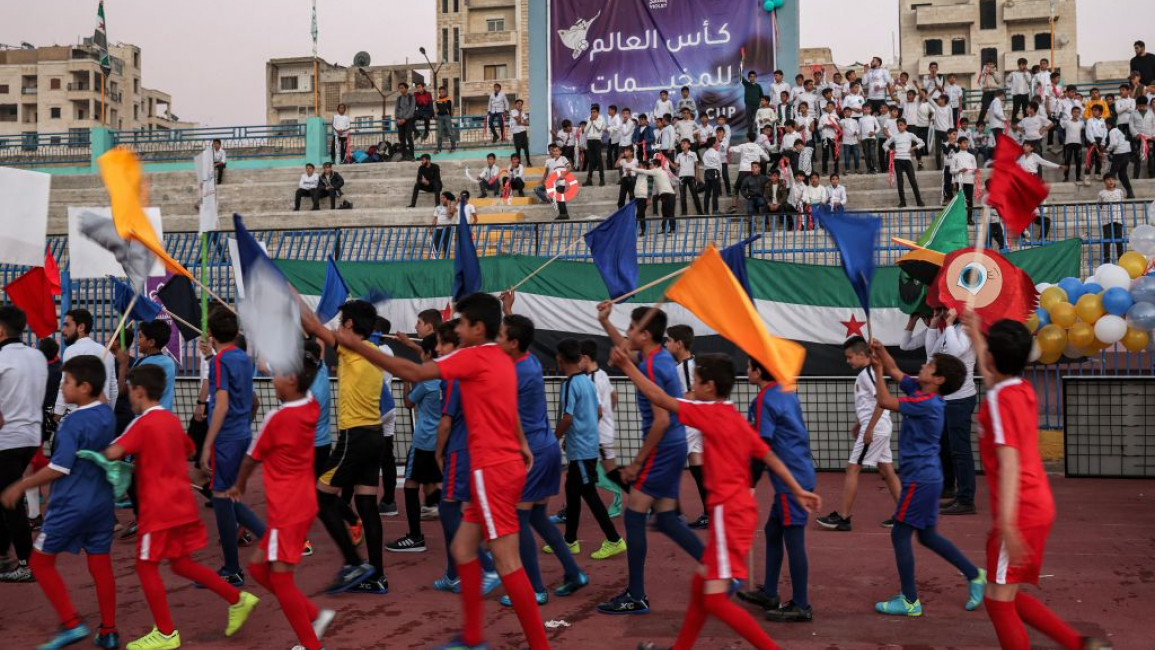 The renovation of a sports stadium in Idlib, in opposition-held northwest Syria has given displaced and injured Syrians new hope for the future, after years of regime bombing and a crushing siege in the province.

The Al-Baladi stadium re-opened last Friday, two days before the start of the Qatar 2022 World Cup, giving Syrians a rare respite from the country's unforgiving war.

Part of the stadium was damaged by regime and Russian airstrikes during the war, which has been rebuilt, while flooring, lighting, and other elements have also been renovated at a cost of $250,000.

The opening ceremony saw gymnastics and karate performances as well as a much-anticipated football match between a local Idlib team and a visiting Turkish club.

"Unfortunately, the situation in Idlib is bad, but the opening of the stadium is good and gives some hope to the people who live here," Idlib-based journalist Fared Al-Mahlool told The New Arab.

"People have the right to live in somewhat good conditions to forget what is happening for a while."

Some spectators said it was an experience they have not enjoyed since 2011, when the Assad regime launched a brutal assault on peaceful protests and started an armed uprising.

"What a very beautiful feeling… I have not felt this since the bombing of all the civilian facilities and infrastructure," Abbas, an activist who was present at the stadium for some matches, told The New Arab.

"We have found the feelings we used to feel ten years ago."

Idlib has suffered almost daily or weekly regime and Russian bombing for much of the war, including the targeting of schools, hospitals, and bakeries.

In addition to the brutal assault on civilian areas, Idlib has also been under a crushing regime siege which has made the province one of the poorest parts of the region.

Opening ceremony of a stadium in Idlib. pic.twitter.com/qjbusxNpOj

Around 320 internally displaced children took part in a 'Camps World Cup' match organised by NGO Violet, which coincided with the start of the Qatar 2022 World Cup.

With an exciting environment and loud cheers 🥳 today, the #Camps_World_Cup was launched in northwest Syria, with the participation of 32 teams from 25 camps and 7 industrial zones. pic.twitter.com/tg1lZfgADD

The Al-Baladi Stadium was built in 1985 but went out of service in 2015 when the regime ramped up its bombing of Idlib province following its fall to the opposition and the entry of Russia into the war.