Explainer: How Iran's rial nosedived after four decades of devaluation

Explainer: How Iran's rial nosedived after four decades of devaluation
MENA
7 min read
A correspondent in Iran
When the 1979 revolution happened, one US dollar was equal to 70 rials, and today it is equal to over 400,000 rials, experts say systematic corruption and officials' lack of planning are to be blamed. 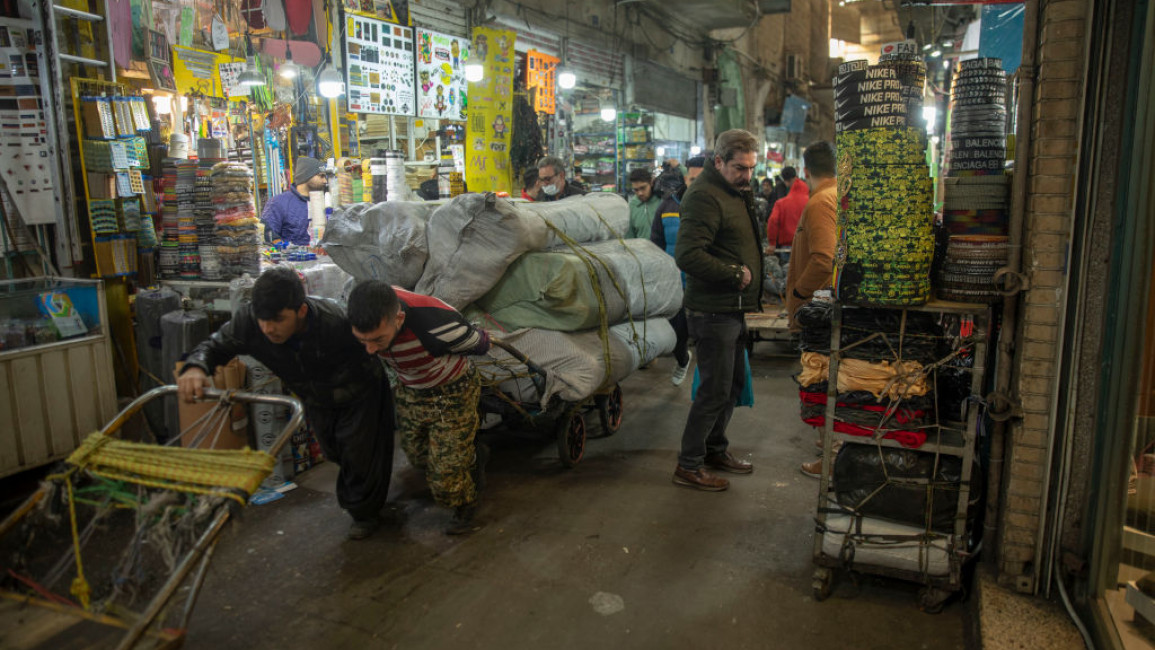 Only five days before being sacked, Iran's central bank former director Ali Salehabadi confidently told the reporters that he did not "recognise" the unofficial foreign currency market in the country. "Neither do I accept the exchange rate on the unofficial market", he added.

However, the same market he did not recognise ousted him from one of the most influential governmental offices responsible for conducting Iran's economic strategies under severe international sanctions.

For Iran's rial, the latest phase of the nosedive began on 12 December. On 29 December, the troubled currency hit new all-time lows when one dollar was selling for about 435,000 rials on the unofficial market.

In an interview with the state-run TV, Salehabadi blamed the demonstrations that rocked the country for the currency devaluation. His claim, however, was rejected by economists who reminded him that during social unrest, the number of clients in the market reduces, and subsequently, the prices will go down or remain stable.

US imposes new sanctions on Iranian officials over crackdown

"Salehabadi's claims had no scientific grounds, and everyone knew he was making some excuses for his failure," explained to The New Arab, an economy assistant professor at Azad University in Tehran, who asked not to be named for security reasons.

"All the government members were aware that the central bank director could not do anything to control the market. They are all responsible for the currency devaluation caused by over four decades of wrong economic and political decisions and corruption," the expert added.

Iran's currency crisis began in 1979, shortly after the revolutionaries toppled the Shah Mohammadreza Pahlavi's dictatorial monarchy. Before the revolution, when almost all Middle Eastern countries supported the Palestinian cause, the Shah was Israel's only regional friend and Washington's closest ally, benefiting from the vast oil market in the west.

Thanks to over four million barrels of oil production every day, the Shah had an enormous income as one of the primary energy suppliers of the west. With the oil money pumped into Iran's economy, one US dollar was equal to 70 rials between 1969 and 1979. Even after the revolution, the currency exchange price was stable for a while, but this period of stability was short-lived.

Iran slams EU for new sanctions over crackdown on protests

On 4 November 1979, the hardline Islamist student activists climbed the high walls of the US embassy in central Tehran, crossed over the barbed wires, stormed into the embassy, and took hostage 52 Americans.

In response, the first US sanctions were imposed on Iran, the first dramatic decline of the national currency occurred, and the rial dropped to 140 against the greenback.

A military attack commanded by Iraq's Saddam Hussein came in after the hostage crisis and resulted in the longest conventional war of the 20th century. The war's blow on Iran's economy and the currency was more decisive than the hostage crisis. In 1988, at the end of the Iran-Iraq war, the Iranian rial was at a record low of 1,000 per dollar.

After the war, Iran entered a period dubbed by the authority as the "construction era". During this time, the first liberal policies and privatisation began in the country, and in parallel, systemic governmental corruption entered a new level.

During the eight-year construction era, people close to the circle of power benefited greatly from privatisation plans and construction projects. But, at the same time, ordinary Iranians paid a high price for the cost of living, as in 1997, when the reformists took office, one dollar was selling for 4,780 rials.

The thread continued, regardless of who held power in the presidential palace. Reformists, moderates, hardliners and conservatives all had the same impact on the country's economy: the Iranian rial continued to decline.

When the hardline Mahmoud Ahmadinejad became the president, the pace of international sanctions related to Iran's nuclear program increased, and by 2011, one dollar was traded for 13,570 rials. One year later, Iran's oil industry was sanctioned, and again another new all-time low was recorded, with one dollar standing equal to 38,000 rials.

Donald Trump's threat of withdrawing from the nuclear deal pushed the rial deeper. In 2018, the exchange rate for the Iranian rial against the US dollar collapsed to 60,000. In the same year, Washington withdrew from the deal, and one greenback was sold for 120,000 rials in Tehran's unofficial market.

Another shock came in September 2020. A sharp increase in petrol prices in Iran resulted in more currency devaluation, and Iranians had to pay 322,000 rials to buy one US dollar.

"Global politics impacts all currencies, but nowhere is it as drastic as Iran," the university professor explained to TNA.

"Iran's economy is sick by corruption, lack of planning and being directed by the officials who only think of their benefit. Our currency's value will keep dropping if these issues are not solved," the academic added.

The latest decline in the value of the Iranian rial occurred in December when hopes faded about a potential agreement between Iran and the US, and new sanctions were imposed on Tehran for selling drones to Russia. Experts foresee the devaluation will continue in the free market, despite short-term improvements.

One of these improvements occurred when a new director was appointed to the central bank. For five days, the currency experienced an increase in value and on 2 January, one US dollar stood at 385,000 on the unofficial market. This improvement was the impact of what the unofficial traders call "mental reaction".

"The market just slowed down to see if the new director could do anything meaningful to control rial's nosedive," a trader in Iran's unofficial market told TNA.

"That was just a predictable mental reaction to the new appointment. At the same time, police and security forces attacked the dealers and literally shut down Charrah Istanbul," he added, referring to a junction in central Tehran where most unofficial exchanges take place.

The traders who exchange foreign currency in the open market and outside the authorised exchange centres, if get arrested, could be punished by prison or even harsher sentences. For example, in 2018, Iran's judiciary executed Vahid Mazloumin, an unofficial market trader.

Following the appointment of a new central bank director, the security forces and intelligent ministry agents attacked the traders. They arrested at least 20 persons who exchanged currencies at a price different from what the government had dictated.

Moreover, the authorities banned Iranian websites, dailies and news agencies from publishing news about the exchange rates in the unofficial market. Instead, the only report could be published about the rates at authorised centres and a governmental scheme called the Nima-ee rate.

Nima-ee is the official subsidised exchange rate that the government and the elite business people affiliated with the establishment have access to. This rate is usually about 100,000 rials less than the rate in the authorised exchange centres.

Iran economy to sink due to US sanctions: IMF

For example, on 8 January, based on the Nima-ee rate, one US dollar was equal to 282,435 rials, while the authorised exchange centres sold one US dollar for about 382,000 rials. On the same day, one dollar was traded for about 400,000 rials on the unofficial market.

Ordinary Iranians have no access to the Nima-ee rate. Their access to the authorised centres' rate is also limited, and each Iranian can only trade 2,000 US dollars in a year.

All these governmental restrictions have made the unofficial market a lucrative business, despite all the dangers. The unofficial market is the only place where ordinary people can trade foreign currencies; however, even Charrah Istanbul is controlled by those close to the establishment.

"We are not even a small fish in this market. People like me make a small benefit by trading the currencies that friends or family members have kept as an investment," the unofficial trader told TNA.

"The government is the chief US dollar owner in the country. So, the big benefit belongs to them and their people, who know in advance when the prices will change," he concluded.