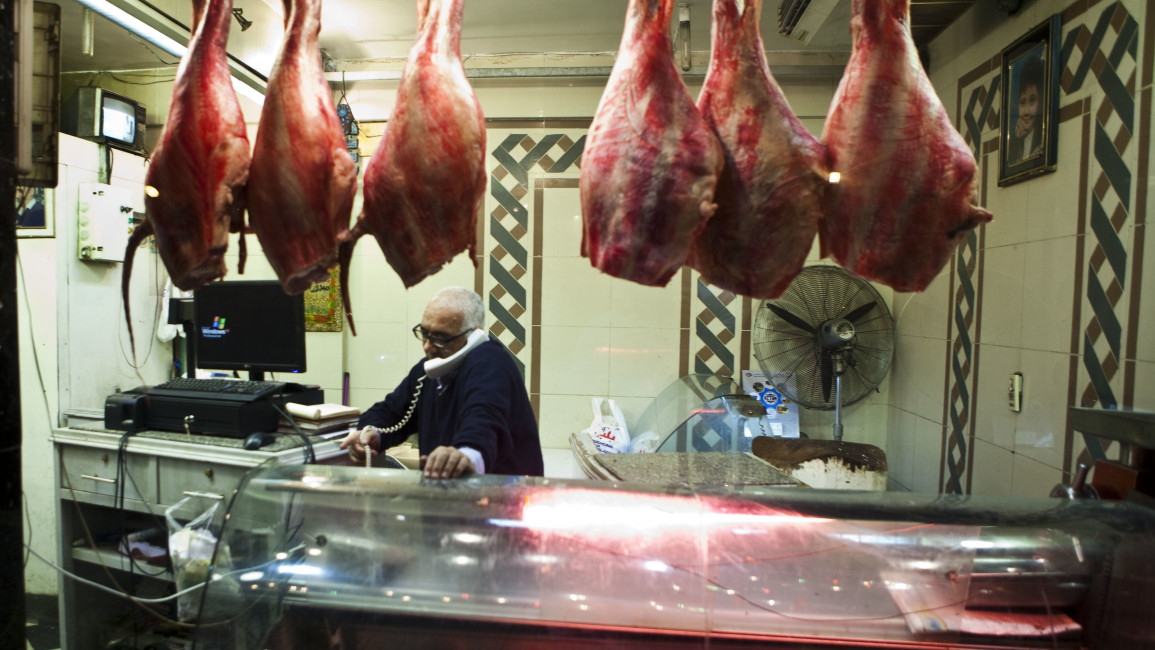 As Egyptian President Abdel-Fattah al-Sisi blamed the media for reporting about the public's inability to survive amid the current economic crisis and a rapidly devaluing Egyptian pound against the US dollar, low and middle-income households have found it almost impossible to meet their basic needs.

Egyptians can no longer afford certain food products after the prices of eggs, milk and meat soared in recent weeks. Currently,  US$1 is equivalent to about 29.9 Egyptian pounds.

The New Arab visited a market within the middle-class Faisal neighbourhood in the Giza province to gauge how people are surviving the current economic crisis.

The interviewees are anonymous as per their request due to sensitivities in discussing the topic openly.

One secretary jokingly remarked to TNA that "maybe it is time for Egyptians to go vegan."

"I think we are obliged to follow a vegan diet since people are unable to even feed their children eggs, let alone chicken and meat," she said to TNA.

The price of a 30-egg box has increased over the past few days to about 105 EGP.

Exceedingly, poor and middle-class families have found themselves obligated to resort to planting alternative sources of protein such as fava beans and lentils, which have also shot up in price as wages remained the same amid the rising prices.

"A simple lunch meal of lentil soup and bread for five costs about 50 pounds, which is a lot for a poor family," a housewife remarked to TNA as she was buying half a kilo of lentils for 25 EGP.

On the other hand, supply has mostly surpassed demand for fresh meat over the past few weeks, becoming simply too expensive for most poor and middle-income brackets. The average price of one kilo reached about 220 pounds, while the imported frozen meat from Brazil and Sudan ranges from 150-180 pounds.

One butcher told TNA that people have refrained from buying meat recently.

"I sell less than half the amount I used to do. Many poor people now buy meat bones to use in making broth for cooking," he said.

"My salary is almost worth 20 kilos of fresh meat…We used to depend on chicken, but the prices of poultry have skyrocketed as well," the secretary, for her part, said.

Last month, the National Nutrition Institute advised people to depend on chicken feet as a source of protein, calls that sparked the outrage and satire of Egyptians nationwide.

A high percentage of Egyptians suffer from malnutrition and obesity due to depending on carbohydrates rather than protein and vegetables.

According to UNICEF, "with two-thirds of child mortality attributable to malnutrition, Egypt stands as one of the 36 countries where 90 per cent of the global burden of malnutrition falls."

"The double burden of malnutrition is characterized by the coexistence of undernutrition along with overweight, obesity or diet-related deficiencies within individuals," UNICEF further noted.

Bread is the most popular source of carbohydrates for Egyptians. A loaf of flatbread costs from 1-2 pounds deepening on the size and neighbourhood where it is sold.

Egypt is one of the world's largest wheat importers, but private-sector importers and mills have struggled in past months to pay for hundreds of thousands of tons of wheat stuck at ports, causing a spike in bread and flour prices.

Last week, supply minister Ali Moselhi announced that discounted bread would be made available even to those not enrolled in its subsidy programme and added that the price of a 90g loaf would be less than one Egyptian pound.

Egypt's economy has been hit hard by the coronavirus pandemic, the government's controversial economic measures, and the fallout from the invasion of Ukraine by Russia.