Africa and Europe summit to bolster defence against jihadist threat

Africa and Europe summit to bolster defence against jihadist threat
MENA
3 min read
The New Arab Staff & Agencies
The "Accra Initiative" is looking for solutions to the root causes of jihadism across West Africa. Whether Europe can help find them is another matter. 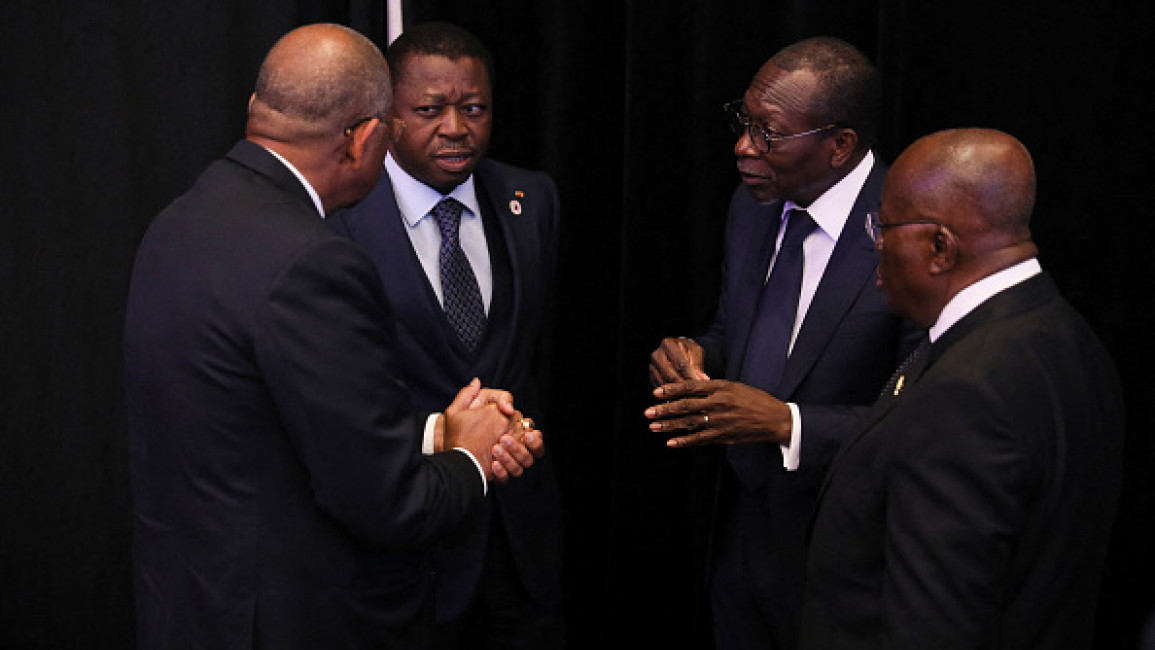 West African nations met with European leaders on Tuesday for talks on "homegrown" ways to prevent jihadist conflict in the Sahel threatening to "engulf" countries on the Gulf of Guinea.

The summit in Ghana's capital Accra also comes as more Western nations have withdrawn peacekeepers from Mali after its military junta strengthened cooperation with Russia.

"Terrorist groups, emboldened by their apparent success in the region are looking (for) new operational grounds, a development that has triggered a southward drift of the menace," he said.

Under the so-called Accra Initiative, heads of state from the Gulf of Guinea and leaders from Niger and Burkina Faso met in Ghana with representatives from the West African bloc ECOWAS, the EU, Britain and France.

Akufo-Addo called for a "home-grown initiative" to answer the threat as well as a comprehensive approach involving economic and social development to tackle the roots of jihadism.

"We remain firm in our commitment to shoulder a greater part of the responsibility."

The Sahel conflict began in northern Mali in 2012, spread to Burkina Faso and Niger in 2015 and now Gulf of Guinea states are suffering sporadic attacks.

Ghana has beefed up security along its northern frontier and has so far escaped any cross-border attacks.

But Benin and Togo in particular have faced threats from across their northern borders with Burkina Faso.

Benin has recorded 20 incursions since 2021 while Togo has suffered at least five attacks, including two deadly assaults, since November 2021.

"For years we have been talking about the risk of contagion of the terrorist threat from the Sahel to the coastal states. Today this is not a risk anymore, it is a reality," EU Council president Charles Michel told the summit.

France had been operating in Mali for almost a decade fighting a seemingly endless battle against jihadist threats  .

But after two coups in Mali, the military junta increased cooperation with Moscow and allowed what Western countries call Russian mercenaries into the country.

That prompted France to pull out troops deployed under its Barkhane anti-jihadist mission. Britain and Germany last week said they would also end peacekeeping missions.

Berlin confirmed on Tuesday it will seek to withdraw its troops from the UN's peacekeeping mission in Mali by May 2024.

British Armed Forces Minister James Heappey last week said the UK would be "rebalancing" its deployment though he did not give details about what form that would take.

"The United Kingdom's armed forces already enjoy great relationships with many of the countries within the Accra Initiative and we stand ready to build on that," he said in Accra.

"But this is a regional problem that you have here in West Africa and it's right that you seek to provide the solution."

Across the three Sahel nations, thousands of people have been killed, more than two million displaced and devastating damage has been inflicted on three of the poorest economies in the world.