Hundreds protest in Afghanistan city against Quran burning in Sweden 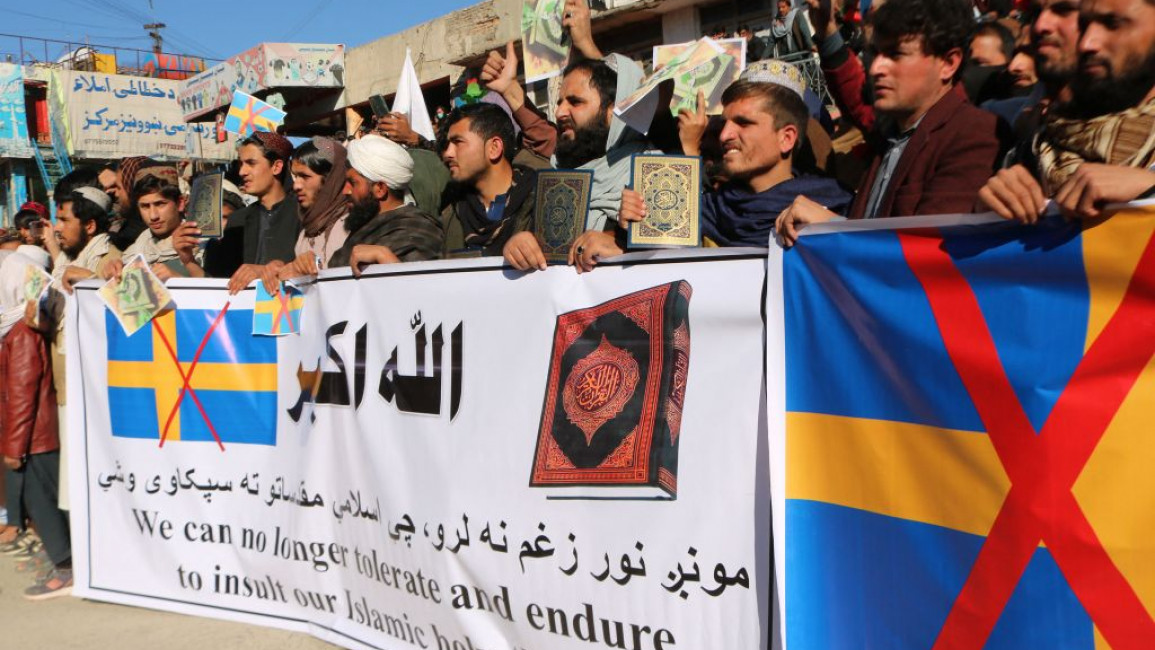 Hundreds of Afghan men staged a protest in the eastern city of Khost on Tuesday to express anger at the burning of the Quran in the Swedish capital over the weekend.

Swedish-Danish far-right politician Rasmus Paludan on Saturday set fire to a copy of the Muslim holy book in front of Turkey's embassy in Stockholm.

Protests have been held since then in some Muslim countries, and on Tuesday crowds of Afghan men condemned the incident in Khost, a city bordering Pakistan.

"Death to the Swedish government, death to such politicians," protesters chanted in the city's main square, an AFP correspondent reported.

Video footage taken by AFP showed protesters, many holding copies of the Quran, burning the Swedish flag and chanting against Paludan.

US says 'repugnant' Sweden Quran burning could be sabotage

Some protesters were holding the flag of the Taliban, as security personnel stood nearby.

"The people of Khost condemned the burning of the Quran in Sweden and called on Muslim countries to raise their voices against this evil and filthy politician," Qadeer Lakanwal, a protester and one of the organisers of the rally, told AFP.

Another organiser, Ibrahim Sayar, said such acts "should not be repeated so as not to create hatred in the hearts of Muslims for other religions".

A protester, speaking on a loudspeaker at the rally, was heard calling on the Swedish leader to catch Paludan "and kill him".

Afghanistan's foreign ministry had earlier condemned the burning of the Quran.

In a statement released on Sunday, the ministry called on the Swedish government "to punish the perpetrator" and to stop "such vile and provocative anti-Islamic and anti-Muslim acts".

The incident was condemned by Sweden's Prime Minister Ulf Kristersson, who tweeted: "Freedom of expression is a fundamental part of democracy. But what is legal is not necessarily appropriate. Burning books that are holy to many is a deeply disrespectful act.

"I want to express my sympathy for all Muslims who are offended by what has happened in Stockholm today."

Demonstrations against Paludan's burning of the Quran also broke out in Iraq and Pakistan, and Indonesia summoned Sweden's envoy on Tuesday over the incident.

Since the Taliban seized power in August 2021, they have banned protests that are not permitted by the regime, especially those calling for women's rights to education and work.