The Queue: The satire of dystopia within a fictional Arab regime

The Queue: The satire of dystopia within a fictional Arab regime
Book Club
6 min read
Aisha Yusuff
Book Club: Basma Abdel Aziz's 'The Queue' is an inventive literary take on totalitarian regimes, and the absurdist nature of obedience demanded. Using a fictional Arab country as her canvas, Basma's writing about governments is globally significant. 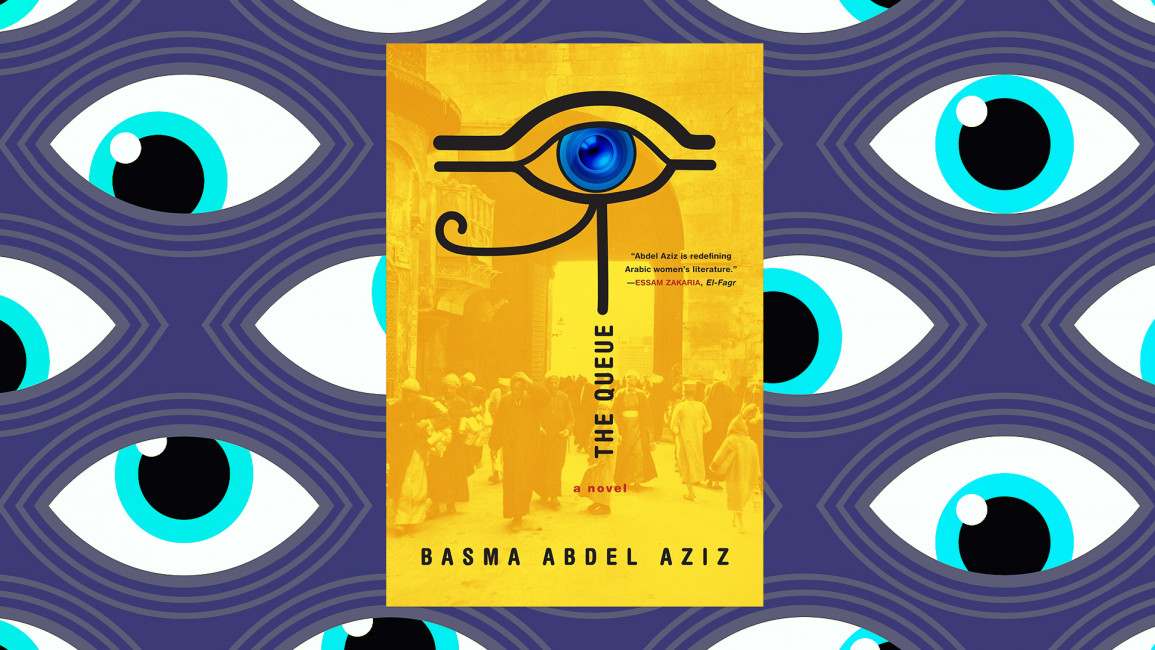 The Queue is the first novel by Egyptian writer, psychiatrist, visual artist and human rights activist, Basma Abdel Aziz. It is set in an unnamed Middle Eastern city after an unsuccessful uprising – taking inspiration from the Arab Spring.

As a response to this failed uprising, an invisible authority known as the Gate, is now in power, and it requires citizens to obtain its permission to carry out even the littlest of their daily affairs.

Despite this oppressive mandate, the Gate has shut its doors and gradually a queue is formed in front of it. It is in this ever-growing queue that readers meet Yehya, the protagonist in this story, and perhaps the only character who stands – however wobbly – in his protest against the authorities.

"Critics tend to compare the dystopian nature of The Queue with George Orwell’s style in 1984, but I’d say that Abdel Aziz goes further to explore how women’s bodies are especially used as sparring grounds for authoritarian regimes"

Yehya has a bullet lodged in his body. During the uprising, which the Gate tagged as the ‘Disgraceful Event’, he was shot on his way to meet up with some friends.

The authorities constantly dissipate absurdities to justify, deflect, and eventually deny the shooting that its Quell force carried out during this Disgraceful Event.

To ensure the absence of any physical proof, they move all persons injured on that day to a military hospital called Zephyr. When Yehya starts noticing unusual activities such as vanishing patients, he escapes from Zephyr.

The problem? Yehya cannot get this bullet removed in any other hospital unless he presents a permission slip from the Gate – the same authorities that are keen to remove all physical proof of police brutality during the Disgraceful Event.

Against his better judgment and in the hopes of an unlikely miracle, Yehya joins the queue formed outside the Gate, to obtain the permission slip. Here, readers meet some other citizens; some are in the queue and others are not.

There is Tarek, a doctor riddled with guilt for being unable to help Yehya remove his bullet; Amani, Yehya’s long-term romantic partner who is proactive in looking for ways to help him obtain the needed permission.

Nagy is Yehya’s best friend and a recently fired philosophy lecturer, and last, but not least is Ehab, a reporter who strives to write the truth even if only in ways that do not entirely ruffle the Gate’s feathers.

Muddy People: A coming-of-age memoir of faith and identity

There are other characters in the book and one striking thing about The Queue is the fact that Abdel Aziz chooses to give some characters names, and leave others unnamed, without any apparent pattern.

For instance, there is the “man in the galabia” and the “woman with the short hair” who appear frequently in the story – as they are both on the queue, albeit on different ideological sides.

The former constantly uses his social power as a religious figure to repackage the Gate’s oppression as if in line with the teaching from the “Greater Book”; the latter is outspoken, a trait that triggers many people on the queue because “she is a woman standing immodestly among men and voicing her opinion”.

Despite holding significant roles in the story, these two characters remain unnamed in contrast with other characters that feature sparingly or not at all. For example, Mahfouz (a dead member of the Quell Force) and Hammoud (a tea seller who sells items to the citizens in the queue).

Another aspect of this book that I liked is how Abdel Aziz highlights Afro-Arabs through an unnamed elderly female character. This character is described as being “dark just like her clothes”, but how Yehya identifies her as being from the South through her “sturdy build and the milky whites of her eyes”.

In most Arab countries, it is common for the darker population (often of Afro descent) to hail from the south. That Abdel Aziz described the character’s dark skin helps readers identify her Afro-Arabness but attributing her being a southerner to other than her skin colour, is a brilliant way to affirm her origins.

I’d imagine that this is what Afro-Arabs would consider “acknowledging their Blackness and African heritage without rendering it hyper-visible”.

"The Queue states the obvious truth, the reason why many of our leaders today continue to commit atrocities and abuse their power with impunity"

Another intriguing quality of The Queue is that while Abdel Aziz drew inspiration from the Arab Spring events to craft this book, the story could very well apply to any nation in any corner of the world.

It is perhaps why Abdel Aziz chose to give symbolic, rather than direct names to the city, the system used for oppression (The Gate) or the acts of resistance that officials met with force (the Disgraceful Event).

It is quite apparent that religion is used by the authorities to control the citizens. For biased readers, this can be a vessel for Islamophobia (since it is set in a Middle Eastern city) but taking a closer look – and the fact that The Queue’s theme can very well apply to any nation – reveals how any ideology (that people find solace and hope in) can be used as a means to tame them into embracing their oppression.

Critics tend to compare the dystopian nature of The Queue with George Orwell’s style in 1984, but I’d say that Abdel Aziz goes further to explore how women’s bodies are especially used as sparring grounds for authoritarian regimes, such as the one she portrays.

She also outlines some of the different forms that this bodily control takes through her female characters. Even more interesting is how the Gate mixes aforementioned religious manipulation thoroughly with this bodily control of women, almost as if they bank on the societal acceptance of misogyny to continuously establish their power.

The Queue does a brilliant job of portraying the helplessness and faux powerlessness that people feel in oppressive societies. Nagy describes these emotions quite well when he realises his apathy.

When some new protesters come to the queue to encourage people to revolt against the Gate – to force them to attend to them instead of just standing in a long queue – the citizens push back. They accuse these protesters of instigating violence, effectively becoming mouthpieces for their oppressors – they even nickname the protesters “Riffraff”.

Nagy says “The queue was like a magnet. It drew people towards it, then held them captive as individuals and in their little groups, and it stripped them of everything, even the sense that their previous lives had been stolen from them…. If everyone took just a single step, that single step alone could destroy the Gate’s wall and shake off this stagnation”.

Through the many themes it explores, The Queue states the obvious truth, the reason why many of our leaders today continue to commit atrocities and abuse their power with impunity. Like the citizens in the queue, many of us are held captive and unlike Yehya, only a few of us are even allowed to resist oppression with our bodies.

The Queue is a thought-provoking book that visualizes the horror of living under authoritarianism – the horror that many citizens of Earth are living in today.

Aisha Yusuff is a book reviewer with a focus on African and Muslim literature. Her work can be found on @thatothernigeriangirl as well as in digital magazines like Rewrite London.