Palestine UNSETTLED: A panoramic lens into Palestinian fate, fortune and fight
Book Club
4 min read
Khelil Bouarrouj
Book Club: If the Apartheid wall could speak, what would it say? Steve Sabella's photobook plays with this idea to whip the viewer up into a frenzy of daily Palestinian dynamism by conjuring up profound images of respite and enduring resistance. 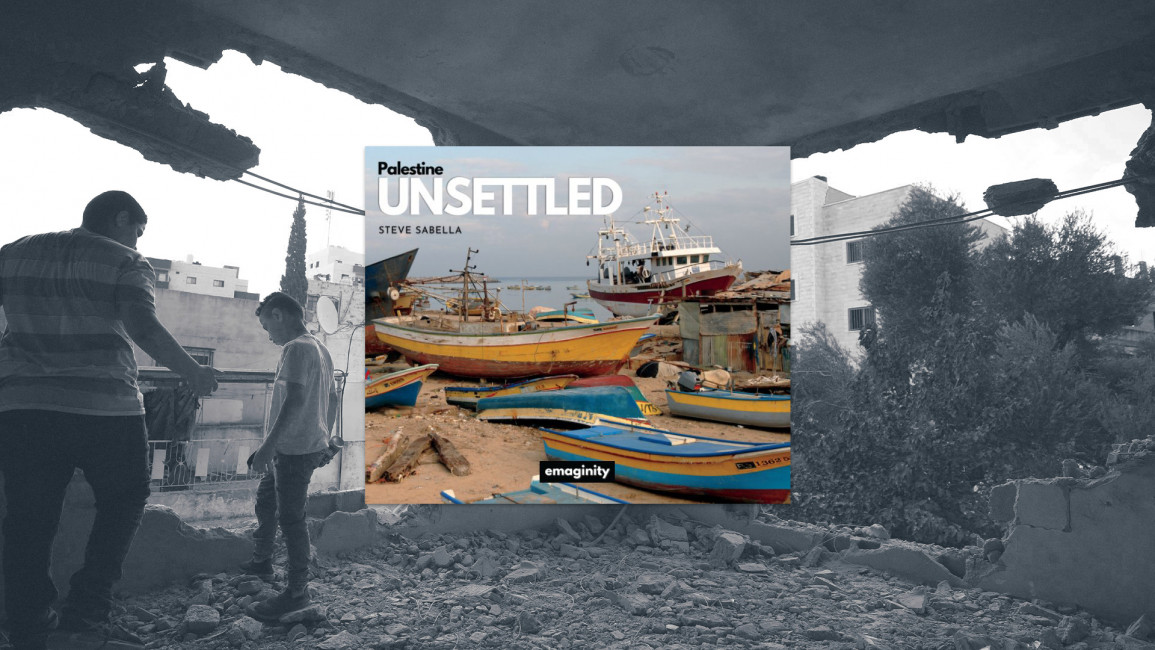 Connoisseurs of Palestinian art will be familiar with Sabella’s installation works, which are staged worldwide. The Jerusalem-born, Berlin-based artist has centred the Palestinian experience — often in its fragmentary and exilic nature — in much of his prior work.

In 38 Days of Re-Collection, for instance, Sabella presents constructed fragments — a complete image denied, a common homeland delayed — that stand in for the quotidian life of Palestinians who exists across a discrete landscape of refugee camps, occupied lands, and the diaspora.

"There is no beginning or end but an endless array of images of resistance, defiance, opposition, and fighting back"

Palestine UNSETTLED offers an alternative vision to Sabella’s prior fragmented depictions. This one is almost panoramic. Palestinians and the land that remains are photographically unobstructed. Many photographs almost breathe within the open space.

The occupation is salient both in the foreground and background of Palestinian life. Nevertheless, while it would be wrong to fail to offer that context, it would be equally wrong to reduce their lives solely to the unjust rule of Israeli apartheid and its corollary of resistance.

This is a delicate balancing act between acknowledgement and reductivism but Sabella deftly captures the Palestinian struggle and the transcendence over Israeli apartheid that also defines Palestinian experiences. That transcends is not entirely apolitical either. Nothing Palestinian can (yet) be.

There is a purpose in every image, even the most mundane. For Sabella, Palestinians need to take control of their narrative and art is one conduit toward that objective.

Individually, most of these photographs would be vivid in their beauty but bereft of any clear meaning — what does a photo of school girls or a boy jumping into the sea symbolise?

But collectively and viewed concurrently, these photographs imbued me with a deep conviction that life can still be vibrant amidst tragedy. They speak to a common theme voiced by anyone who has met Palestinians: the extraordinary capacity for perseverance.

The awe I felt made me re-evaluate the meaning of Palestine UNSETTLED, the very word. Opening the text, I brought my tendency to assign occupation-centred politics to the representation of the Palestinians.

Palestine UNSETTLED, I concluded, stood for the instability of life under occupation. But upon completion, I understood the word differently.

There is a movement that embodies the photographs — children playing, artists performing, and clothes billowing in the air. What’s moving is the Palestinian spirit. It is the resilience and joie de vivre that unsettles the occupier.

The Great March of Return

Between March 2018-December 2019, Palestinians in the occupied and blockaded Gaza Strip held weekly marches protesting Israel’s stranglehold on the territory.

In that period, 223 Palestinians were murdered by Israeli occupation forces. How does an artist depict the theatre of the lethally absurd? Sabella adopts an other-worldly approach in a collage of images that place Palestinian protestors against a backdrop of the universe.

The result is striking in collages that lend themselves to a science-fiction narrative arc. Palestinians against a heavily-armed Israel that has entrapped them inside a ghetto — what plenty of observers have called the world’s largest open-air prison — were up against lop-sided odds.

Israel has the capacity and willingness to inflict lethal opposition to Palestinian aspirations. The fact that Palestinians knew this and yet kept coming back week after week was, as Sabella seems to be saying, out of this world.

It was a defiance of superhuman courage, a fantastical stand under the knowledge that one was doomed to fail for the foreseeable future. The Palestinian bravado, the murderous snipers, and the world’s enabling silence required moving beyond ordinary photographs.

The Weaponized Camera in the Middle East

Sabella is conveying something else, as well. In the globe-shaped fresco that concludes the book, there is no beginning or end but an endless array of images of resistance, defiance, opposition, and fighting back.

In his telling, the fresco symbolizes the eternal — hence the universal background — march toward liberation. Even when defeated at the moment, it goes on and on and on.

Khelil Bouarrouj is a Washington, DC-based writer and civil rights advocate. His work can be found at the Washington Blade, Palestine Square, and other publications.