Israel’s history in the eyes of a staunch ideologue: Benjamin Netanyahu’s memoir 'My Story'

Israel’s history in the eyes of a staunch ideologue: Benjamin Netanyahu’s memoir 'My Story'
Book Club
8 min read
Emad Moussa
Book Club: Benjamin Netanyahu has triumphantly returned to Israeli politics. The three-time PM has left an indelible mark on the Israeli political landscape, with his right-wing, myopic and troubling ideals now defined in his memoir, 'My Story'. 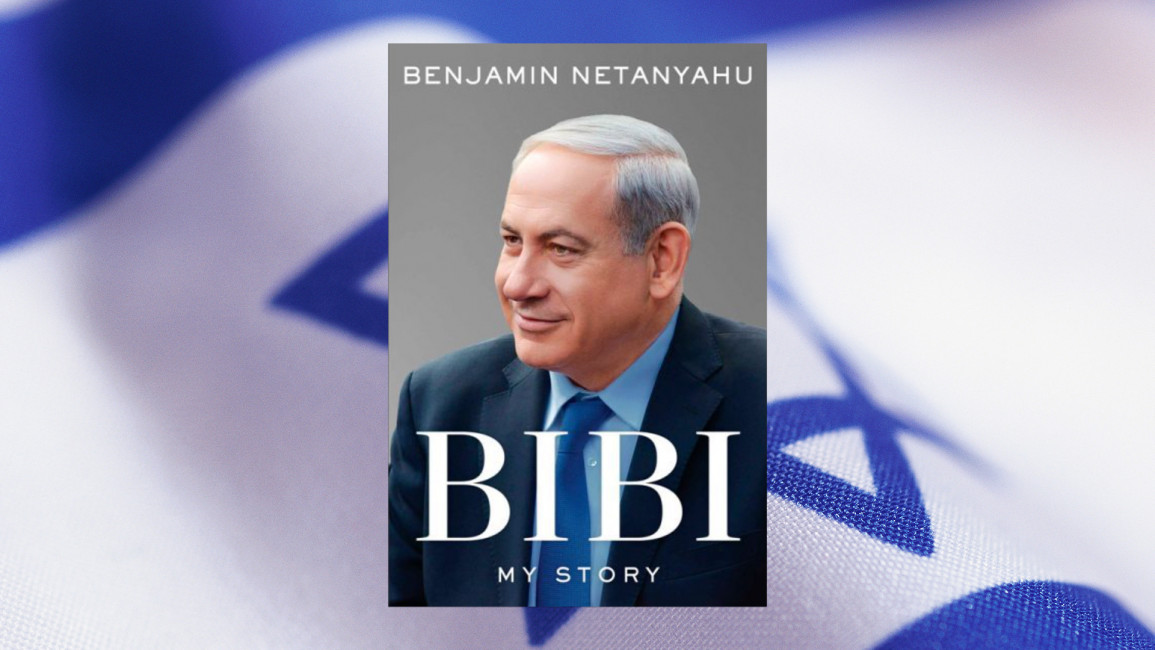 Whether verbalised in a story or a song, carved in stone, or inscribed on papyrus, leaders since ancient times attempted to transmit to future generations an account of their experience and accomplishments. Today we call them memoirs, and are delivered differently.

Over nine months after he was ousted from office in 2021, Israel’s longest-serving prime minister, Benjamin (Bibi) Netanyahu, set out to write his life story, a voluminous memoir titled Bibi: My Story.

With the astonishing return to power after the recent election this November, Bibi’s story may yet to come to a conclusion.

My Story is a personal account of Israel’s history, through Bibi’s eyes as a soldier, brother, son, husband, diplomat, and, above all, prime minister. But as an autobiographical narrative, it is  strictly mono-dimensional and, like most political memoirs, an open season for self-praise, bravado, and career defensiveness.

In the first part of the book, the pre-ministerial phase, Netanyahu lays down his early life and influences, presenting himself as a relatable individual, and highlighting the social dynamics with his brothers and parents, and later his wife Sara. He promotes a version of himself as a humble family man destined to lead all Jews, not only Israel.

Bibi fondly and copiously speaks about his brother Yoni (Jonathan), an IDF commander who was killed during the 1976 Antebbe raid on a PLO-highjacked airliner.

Yoni is portrayed as Bibi’s role model and the reason he joined the IDF elite unit Sayeret Matkal, where he participated in missions in Egypt, Syria, Lebanon, and Jordan. The missions, which he frames as heroic and daring, are at times rather disturbing, not only in their overly dramatised details but also in their normalised brutality and cold implementation.

That said, an early Bibi biography by Anshel Pfeiffer has shown that Bibi took full advantage of the idealisation of Yoni, as the perfect patriot and soldier, to catapult his own political career. Yoni, who died divorced, alone, and under-accomplished, was not the superstar amongst his family as Bibi has us believe, Pfeiffer argues.

Israel must be forced to lift its blockade on Gaza

Bibi’s father, Benzion Netanyahu, was his intellectual inspiration. He was a scholar of Jewish history and a  follower of Russian extremist Zionist Vladimir Jabotinsky, as well as a maligned activist for Zionism and the Jewish state. The Benzion-Jabotinsky ideological paradigm would guide Bibi’s throughout his eventful career, especially as a decision-maker.

The ideological trajectory is evident from page one. Starting with the map that replaces the term West Bank with Judea and Samaria, to describing the occupied territories as “liberated” and the Palestinian struggle for self-determination as “conquering the land of Israel,” all the way to calling the settlers’ evacuation from Gaza in 2005 “uprooting” (p. 75).

With this worldview in place, Bibi’s account of history is filled with convenient truths and more convenient omissions. In the first 100 pages or so, the term Palestinian never appears. Palestinians are either Arabs, terrorists, or, generically, the PLO. All are depicted negatively. Israel’s foundation is glorified and narrated in daunting and compassionate details, while there is hardly a whisper about the Nakba.

"With this worldview in place, Bibi’s account of history is filled with convenient truths and more convenient omissions. In the first 100 pages or so, the term Palestinian never appears. Palestinians are either Arabs, terrorists, or, generically, the PLO. All are depicted negatively"

The first acknowledgement of Palestinian capacity in the book occurs on page 205, where Netanyahu, during the Madrid secret talks between the PLO and Israel, describes Palestinian negotiator Dr. Hanan Ashrawi as “a worthy opponent.”

Historical events that do not align with Bibi’s linear narrative of a heroic Israeli army and a moral Jewish state are omitted or downplayed. In his account of the 1968 Battle of Karameh, for instance, Bibi’s only discusses the “righteous motives” for the Israeli army to attack the Jordanian town of Karameh to destroy the PLO, and cynically talks about Arafat’s fleeing on a motorbike from the town. He, however, brushes over the battle itself, leaving out any details about Israel’s heavy casualties and, eventually, defeat.

The pattern is repeated over and again regarding, among other things, the 1967 Six-Day War, the 1973 Yom Kippur War, the 1982 Lebanon war, and the Palestinian 1987 first Intifada. All are framed through the moral Justifications of the Israeli attacks, Jewish victimhood, and the IDF’s heroic deeds. Facts that contradict these overarching narratives are sidelined or muted.

Bibi, for instance, speaks abundantly - and proudly - about his role as first-time prime minister in establishing a Jewish stronghold at Hebron’s al-Haram al-Ibrahimi mosque (the Cave of Patriarchs), but ignores Baruch Goldstein’s, a Jewish terrorist, who massacred 29 Palestinian worshippers at the site in 1994.

A characteristic that distinguishes Bibi Netanyahu from other Israeli politicians is his excessive indulgence in the victim narratives. Throughout the book, he is the victimised Jew in a world teeming with anti-Semitism and was a victimised soldier standing against Israel’s Arab and Palestinian enemies. Today, he is a victim politician defamed and demonised by his country’s left and the left-leaning mainstream media. He resembles “the character defamation” against him to the “slander campaign” by Ben-Gurion against Vladimir Jabotinsky. He writes: “the genesis of [the left] hatred for me often perplexed me” (p. 606).

Netanyahu and the long shadow of an Israeli demagogue

With a similar mindset, Bibi laments over three chapters his ill-fated position and hard struggle against President Barak Obama’s “bias to Palestinians,” accusing the US president of giving Palestinians free rein while denying Israel the same.

If a victim mentality facilitates something, it is an exalted sense of righteousness. As he postulated in his previous books A Place Among the Nations (1993) and A Durable Peace (2000), Netanyahu in the memoir uses terrorism as a dividing mark between the “civilised” and the “barbaric”. The reference is unmistakably to Israel as a “first-world Western country” versus “the barbaric Arabs and Palestinians.” The connection is deployed frequently  throughout the book to, inter alia, frame Palestinian dissidence as nothing but mindless terrorism.

"One of the odd fallacies in Netanyahu’s historical account is readjusting history to match today’s reality - turning logic on its head, in other words. He denies Israeli apartheid and, instead, claims that the Palestinian Authority “openly and unabashedly practices apartheid” against Jews by banning them from living in a Palestinian state"

Building on such a racist theory, he denies the centrality of Palestine as the cause for Arab dislike of Israel, and Instead, attributes the conflict to rooted anti-Semitism in the region’s history. Netanyahu goes as far back as the time of Prophet Muhammad in 6th Century Arabia to prove his theory, citing the “formidable Jewish tribe of Kureish,” which the prophet banished from the peninsula for betrayal. The problem is that neither was the tribe named Kureish nor was it formidable. Kureish was the prophet’s tribe in Mecca, and Bani Quraida was the treacherous Jewish tribe in Medina.

One of the odd fallacies in Netanyahu’s historical account is readjusting history to match today’s reality - turning logic on its head, in other words. He denies Israeli apartheid and, instead, claims that the Palestinian Authority “openly and unabashedly practices apartheid” against Jews by banning them from living in a Palestinian state (p. 413). This is not the first time. He previously described the evacuation of Jewish settlements in the occupied West Bank as “ethnic cleansing.”

Another example is parroting - again - the human shield rhetoric against Hamas during the 2014 and 2021 Gaza onslaughts. Debunked claims then and there, Netanyahu still argues: “Hamas placed its stockpiles of rockets and missiles in hospitals, schools, and mosques, often using children as human shields” (p. 516).

For a former prime minister who knows Gaza’s infrastructure and socio-demographics to imply that Palestinians, of which Hamas members are part - effectively - used their own families as human shields is simply racist. It dehumanises Palestinians and provides Israel with a moral mandate to commit “unsanctionable crimes” against them. Bibi’s Gaza war account is only yesterday’s history, but, astonishingly, he has no qualms about delivering claims that are only one Google search away from refuting.

On the ground, Netanyahu’s contributions to Israel cannot be understated. They begin with economic reforms and the high-tech revolution and do not end with significant political breakthroughs. Of these breakthroughs, which he discusses profusely in the last chapters, is his success in convincing the Trump administration to recognise Jerusalem as Israel’s capital. An “end to 70 years of diplomatic absurdity” (p. 601), he writes.

The other breakthrough is the normalisation deals with four Arab countries. The former prime minister takes liberty in revealing some of the hidden details that led to the so-called Abraham Accords with the UAE and Bahrain, which he says, happened with the approval and encouragement of Saudi Arabia. He also speaks of years of clandestine intelligence cooperation with several Arab countries, with the Hashemite Kingdom of Jordan topping the list.

Boycott: American idealism and the defence of Palestine

A staunch ideologue he may be, but Netanyahu’s political resilience and craftsmanship are unparalleled in Israel’s history. The memoir, for this reason alone, serves not only as a personal account of Israel’s politics and worldview but also provides an interesting vista into Bibi’s psychological makeup.

It remains that the book is heavily descriptive, with fictive details based on real events. Because of its ideological undertone, the narrative is linear and Netanyahu’s account lacks serious self-reflection or critical assessment.

His “truths” may be endearing and exciting for an old-fashioned Zionist Boomer in a Brooklyn apartment, as much as they are for his like-minded ideologues in Israel. They may also boost his renewed political career. But in a world growingly disillusioned with the narratives of Zionism, those “truths” are only political statements, some are incriminating.