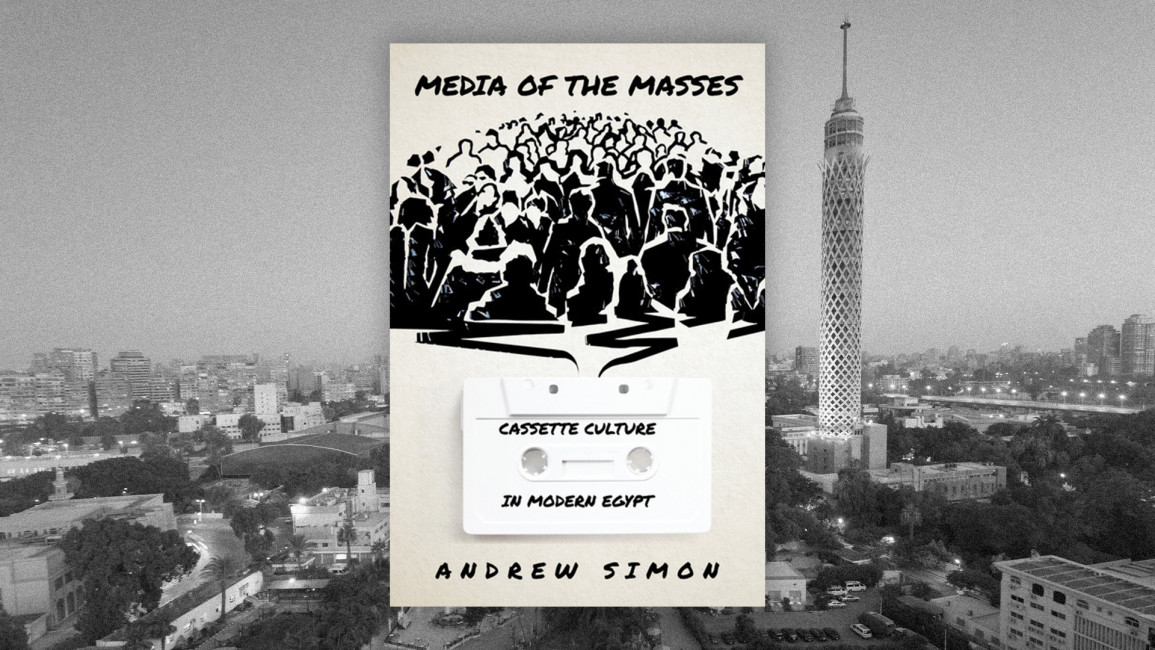 Andrew Simon’s book, Media of the Masses: Cassette Culture in Egypt (Stanford University Press, 2022) offers a unique and original insight into a sliver of Egypt’s collective history and memory through an overlooked medium of communication – cassette technology.

As a medium that is directly linked to Egypt’s politics, culture and daily life, cassette technology, the author writes, “decentralised state-controlled Egyptian media long before the advent of satellite television and the internet.”

Against a detailed backdrop of how cassette technology became a household feature in Egypt, Simon recounts the role Egyptian migrant workers played in popularising cassette culture in Egypt, which in turn influenced consumer culture locally.

In 1974, coinciding with Egypt’s economic opening and imports, Egyptians working abroad would bring home audiocassette players, many of which were purchased from Libya. The Iraqi invasion of Kuwait was another political upheaval during which Egyptian migrant workers returned home with yet another influx of cassette tapes.

Simon notes that cassette technology swiftly overstepped the fine line between luxury and a household commodity, as audio cassette players became a fixture in houses.

While media advertisements and celebrities contributed to the wide dissemination of cassette technology which the author terms the “economy of desire”, its popularity grew in sharp contrast to Egypt’s strict censorship.

Due to its cheap technology and accessibility, Egyptians were not only recipients and listeners of audio cassette tapes, but also played a role in production and participation, giving rise to a deep rift between what was considered cultural material to so-called vulgar forms of expression; the latter in reference to working-class societies who now retained the possibility of entering the artists’ scene, at least within their social classes.

In the 1970s and 1980s, Simon notes, music “became public enemy number one for a wide range of critics who held the everyday technology accountable for poisoning public taste.”

Cassette culture in Egypt was attacked over the now out-of-control cultural production in the country and the infiltration of the working class onto the scene.

Critics emphasised social status in their attacks, claiming that ordinary people should not be involved in the creation of Egyptian culture. “The anxiety inspired by cassettes and their operations did not simply concern aesthetic sensibilities but entailed nothing less than a struggle over what constituted Egyptian culture and who had the right to create it,” the author asserts.

The attack on social classes increased state censorship, classification of artists and decisions on how much airtime would be allocated to performers, in a bid to counter what the former Minister of Culture Dr Ahmad Haykal deemed “vulgar” art.

However, despite efforts to curb the spread of working-class Egyptian expression and the spread of cassettes, state censorship proved to be a failure.

Simon writes, “Audiotape technology empowered an unprecedented number of people to become cultural distributors, changing the very circulation of cultural content.” Piracy contributed to the increase in cassette circulation, while also causing cassette companies to become victims, due to piracy becoming a popular practice, not to mention people recording songs from the radio onto cassettes from their homes.

Within a changing society, audio cassette tapes also played a role in challenging Egypt’s state narrative. Simon portrays the challenge through the contrasting narratives of US President Richard Nixon’s visit to Egypt to strengthen US-Egypt relations and to promote Middle East peace, at a time when the Watergate scandal caused political turmoil in the US.

While the Egyptian state narrative celebrated the visit and created media that appropriately supported its official narrative, Egyptian performer Shaikh Imam’s song Nixon Baba offered a different take which focused upon the US President’s political fragility and rejected the state narrative of collective welcome.

As the author notes, “Audiotape technology enabled individuals, like Imam, not to simply criticise ruling regimes but to vocally deconstruct the very stories told by them.” Nixon notes that even those who disliked the song still retain its memory as a result of its dissemination and strong opposition to the Egyptian state’s narrative.

Choosing a very much overlooked medium through which to conduct such an in-depth study, Simon’s book offers a closer people’s perspective of Egyptian culture and memory through cassette technology.

In terms of a country’s collective and historical memory, archives are of paramount importance. Simon’s discussion about the importance of preserving cassettes and video tapes provides an insightful perspective on how much material can be accumulated and lost, either due to incorrect preservation or confiscation.

The collections which Simon discusses in his book convey the importance of preservation as a means of linking past and present which do not necessarily form part of the state’s official narrative.

Cassette culture offers a glimpse of Egypt’s overlooked social classes and the efforts of the state to erase this segment from the official narrative. Yet as the author concludes, “To reimagine the past, we need only begin by reconsidering the ordinary things that surround us."

Ramona Wadi is an independent researcher, freelance journalist, book reviewer and blogger specialising in the struggle for memory in Chile and Palestine, colonial violence and the manipulation of international law.