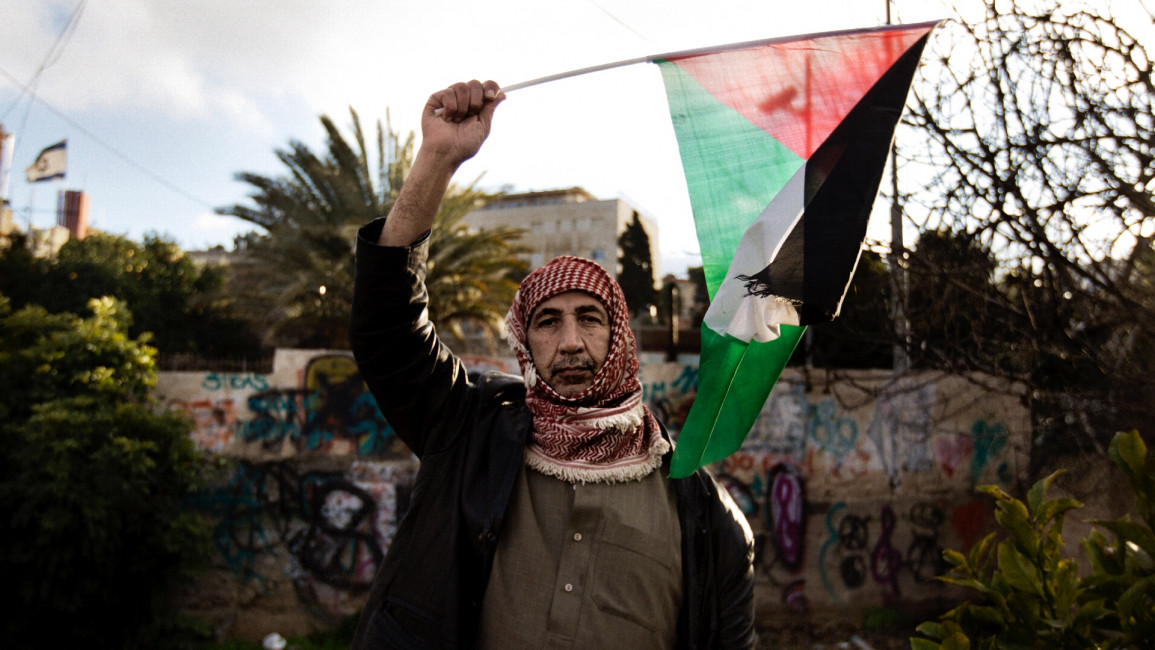 "We're burning Arabs today, the Molotov cocktails are already in the trunk". "We must break their faces, bury them alive".

The racist anti-Palestinian messages circulating on a WhatsApp chat of the far-right Jewish supremacy group, Lehava, were an indication of the violence to come.

On 22 April, hundreds of activists from the extremist movement rampaged through East Jerusalem in a march organised to "restore Jewish dignity" to the city, descending upon Damascus Gate chanting "Death to Arabs".

Over 100 Palestinians were injured in clashes with the Israeli extremists, while Israeli forces fired rubber bullets at Palestinian counterdemonstrators and detained dozens.

Lehava, which means "flame" in Hebrew, is an acronym for the 'Prevention of Assimilation in the Holy Land'. The extremist group, founded in 2005 by Benzi Gopstein, aims to prevent marriages or relationships between Jews and non-Jews. Some members are followers of Kahanism, a Jewish supremacist ideology based on the teachings of Rabbi Meir Kahane.

Until recently, the organisation was mostly active in schools, universities, and other public spaces to lobby for its anti-miscegenation message. Following Israeli elections in March, and the entry of the Religious Zionism bloc into the Knesset, the group now feels empowered.

The extremist march came against a backdrop of escalating tensions over public space in East Jerusalem and the ongoing erasure of Palestinian identity in the city. In the preceding weeks, Israeli forces had installed barricades to cut off access from the Old City's Damascus Gate plaza, the historical social and cultural hub for Palestinians, especially during Ramadan.

Days after the violent confrontations on 22 April, the Israeli barriers were finally removed, ostensibly to calm tensions, but for Palestinians it was only a small victory in a larger battle to protect their presence in Jerusalem.

The last time major unrest erupted in Jerusalem was in 2017, when Palestinians organised daily demonstrations to protest the installation of metal detectors and added security measures at the entrances to the Al-Aqsa Mosque compound.

In response to a surge of uncoordinated attacks in 2015 by young, mainly politically unaffiliated Palestinians in the city, dubbed the 'Jerusalem Intifada', Israeli Prime Minister Benjamin Netanyahu in 2017 declared Damascus Gate a symbol of "terror", with Israel's public security minister vowing to upgrade security in the area.

"I can tell you that we are going to conduct unprecedented changes on all of these security plans of the Damascus Gate: cameras, intelligence, police posts and changing the topography of the Gate," Gilad Erdan said. "The Damascus Gate is going to go through a revolution."

Israeli authorities eventually backtracked and removed the devices following the mass mobilisation of Palestinian civil society, but it merely confirmed Palestinian fears that their presence, and any expression of their culture, is constantly under threat.

Israeli urban planning has prevented a direct transportation route between the southern and northern Palestinian suburbs of the city, with Damascus Gate becoming a hub where Palestinian residents can express their national identity together, either through simply shopping or by organising political and cultural events – and this is something the Israeli government does not want.

"Since the 2015 events, the Damascus Gate square turned into a focal point for most of the Palestinian cultural and political activities. As a result, Israeli forces worked to transform the place into a military checkpoint," Mazen al-Jaabari, Director of the Youth Development Foundation at the Arab Studies Association, told The New Arab.

Various security measures have been touted at Damascus Gate in cooperation with local and international surveillance companies, according to Who Profits?, an independent research center. They range from thermal and License Plate Recognition (LPR) cameras to facial recognition technology, to build profiles on Palestinians in Jerusalem and those visiting from the West Bank.

Starting in 2016, Israel has also built a military checkpoint near the entrance to the gate and two watchtowers on the stairs to the entrance, in an increased militarisation of the public square. Some Palestinians believe Israeli authorities also wanted to capitalise on Covid-19 restrictions to further limit Palestinian access, turning the emergency status of the pandemic into a permanent reality of restricted gatherings to limit a public Palestinian presence.

While Damascus Gate is a symbol in the battle over public space, an entire formalised Israeli apparatus has been devoted to reducing the Palestinian population in East Jerusalem since its occupation in 1967.

Approximately 323,700 Palestinians live in East Jerusalem as permanent residents, not Israeli citizens, with over 67% living below the poverty line. Between 1967 and 2016, Israeli authorities revoked the residency status of more than 14,500 Palestinian Jerusalemites, while the Municipal Planning Authorities implement an active policy of house demolitions.

Since 1967, Israel has demolished over 2,000 homes in East Jerusalem, with over 100,000 Palestinian residents living under the threat of demolition due to the extreme difficulty of obtaining Israeli building permits. In some cases Palestinians are forced to demolish their own homes to avoid exorbitant fines.

This systemic exclusion from Israeli Municipal housing policies forces Palestinian residents to expand already existing buildings in overcrowded areas. But Palestinians are also being driven out, especially from neighbourhoods surrounding the Old City, in a coordinated effort between settler organisations and the Israeli courts and government.

"The policy is to surround Palestinian neighbourhoods with settlement belts that prevent them from communicating with each other, which turns them into a small mosaic in an entirely Jewish surrounding," Khalil Toufakji, a Palestinian cartographer and expert on Jerusalem, told The New Arab. "Then, starts the penetration of these neighbourhoods through the persistent and thorough seizure of Palestinian homes".

The Sheikh Jarrah neighbourhood in East Jerusalem is the most recent demonstration of this policy, with over 500 Palestinians at risk of being forcibly evicted to be replaced by Israeli settlers.

In 1956, 28 Palestinian refugee families displaced from their homes in Jaffa and Haifa - in the aftermath of Nakba - settled in Sheikh Jarrah. Later, the Jordanian government, which was the mandating state in East Jerusalem, struck a deal with UNRWA to build homes for these families should they renounce their refugee status, and the houses would be registered as their property within three years.

After the 1967 war, Jordan lost its mandate status and Israel occupied East Jerusalem along with the West Bank. Legal documents the families were promised by the Jordanian authorities were either lost or insufficient to prove the ownership. In the 1970s, Jewish groups started claiming their right to that land based on earlier Ottoman documents. Soon after the families started a long legal process to prove the opposite.

"In 2009, I travelled to Ankara to extract the Ottoman documents of these houses in the archive of the Turkish defence ministry. I'd spend days digging through the Turkish archives from 9am to 5pm. After finding the documents explaining the falsity of the settlers' claims and submitting them to the Israeli court, the court refused to consider them," Toufakji said.

He was not surprised. Land ownership is not the problem, he says, but rather a systematic attempt to demographically engineer Jerusalem. "It's an integrated carefully planned process."

The battle over Damascus Gate, evictions in Sheikh Jarrah, and the rise of Israeli extremist parties in the Knesset are all connected by one goal: to suppress Palestinian identity and turn the community into an 'Arab minority' with no national aspirations.

In Tunisia, travel bans are weaponised to silence opposition

Will Riyadh steer Pakistan out of its economic quagmire?

Israel's Far-Right is Al-Aqsa-ing for Trouble