In the last decade there has been a shocking decline in Syrian students, and for those still in school the rising cost of learning is unsustainable, yet the regime’s response is further divestment and poorer quality of teaching, writes Joseph Daher. 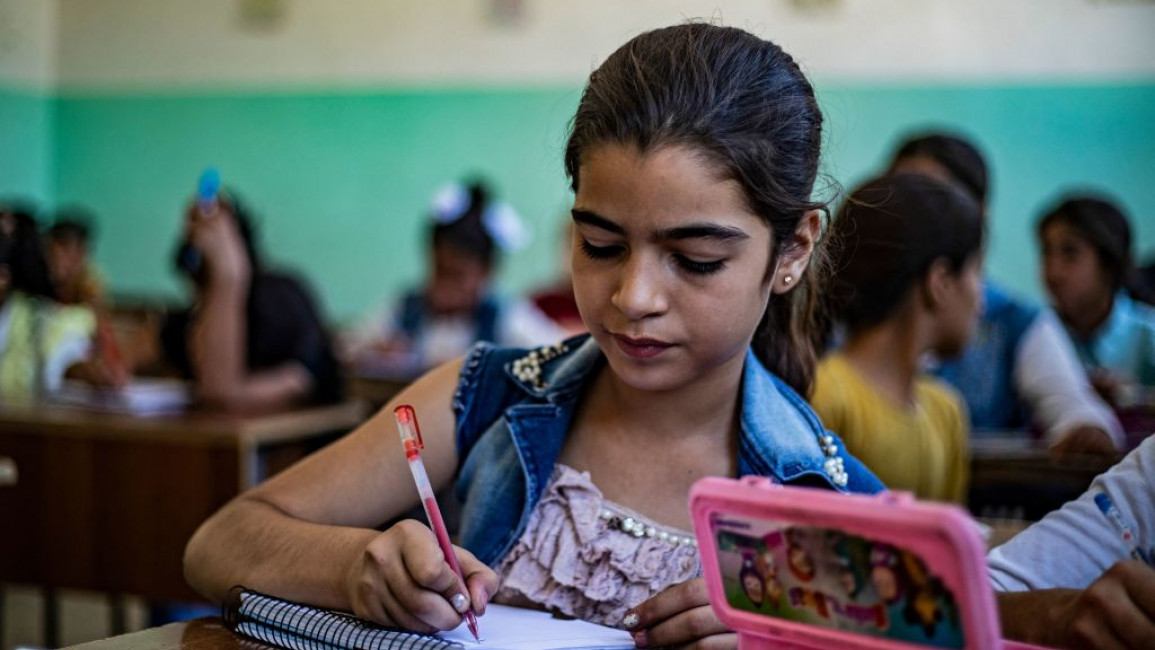 The beginning of the school year started last week for more than 3.65 million students in Syria. For many Syrian families, this period has been marked by worry that this will bring growing costs.

The requirements of school supplies, including clothes, notebooks, pens and books, often exceed families’ monthly incomes, reaching between SYP 150,000 and 400,000 (Approximately $53-$142) for a single student. In an interview with the pro-government newspaper Al-Watan, Manal, a mother of four, explained how she needed around SYP 850,000 ($302) for supplies for all her children.

Prices of school supplies have generally increased by 50% (at times even 75%) in certain governates, compared to last year. This has been attributed to the high costs of production and manufacturing, as well at the transportation of goods.

State employees were offered the possibility to purchase some of the supplies at the Syrian Trade Establishment (STE), the state institution with branches selling food and other goods at low prices, but many of its stores lacked some of the necessary goods, not to mention, some of the materials available were bad quality.

''Children are often learning in overcrowded classrooms, and in buildings with insufficient water and sanitation facilities, electricity, heating or ventilation. By the end of 2021 it was reported that over 2.4 million children in Syria were not attending school, nearly 40% of them girls.''

Among the list of expenses is the cost of transport, which has also increased in the past few years as a result of a rise in fuel prices. The increase in cost has had a negative impact on those living outside the major urban centres, where most state institutions and the country’s economic activities are located.

This price hike has also meant more absenteeism amongst employees – including in schools – because these workers are forced to spend approximately half of their salary on transport alone. At the same time, increasing numbers of university and secondary school students who live in the suburbs, have simply been unable to afford travel to attend classes.

This has all happened against a backdrop of continuous rising inflation in the country. For example, the national standard reference food basket in the country has increased by 33% since the beginning of the crisis in Ukraine, and 87% compared to August 2021, reaching SYP 313,784 ($111.51). Meanwhile, the minimum monthly wage in Syria is SYP 92,970 ($33) and the average monthly salary of a public state employee is around SYP 150,000 ($53.3).

Alongside a continuous rise in the cost of sending children to school, in the last decade the education system has also suffered enormously as a consequence of the war. One in three schools in Syria are non-functional because they were either destroyed, damaged or are being used for military purposes. With the current rate of funding, it will take another 30 years to rehabilitate all of these schools, according to a recent report released by UNICEF.

Children are often learning in overcrowded classrooms, and in buildings with insufficient water and sanitation facilities, electricity, heating or ventilation. By the end of 2021 it was reported that over 2.4 million children in Syria were not attending school, nearly 40% of them girls.

Between 2010 and 2018, the enrolment rate for the children between 5–17 years had decreased from 85% to 61%. Child labour is said to have increased significantly during this period as kids sought work to help their families survive, although no official data exists.

UNICEF estimated that “more than 6.5 million children in Syria are in need of assistance”, which was the highest number recorded since 2011.

Furthermore, around 150,000 teachers have left their jobs in public education; that’s more than  a third of education employees that existed before the war.

Today, the general lack of qualified staff within the sector is the result of [forced] immigration and low salaries in state institutions. This has been the case in Suwayda, for example, where across the governate’s schools there is a shortage in teachers, especially those who specialise in the sciences and mathematics.

The story of shortages is very similar in other regions also. The government attempted to compensate for this by employing university students to fill in – often as “contractual” staff who receive lower salaries and who lack the sufficient training.

Students yesterday began a new school year in #Syria. Sadly, with nearly 50% of schools still not functioning , #education remains out of reach for 2.5M out of 5.5M Syrian schoolchildren. Let's work together to change these numbers through #EarlyRecovery & resilience programmes. pic.twitter.com/pkOekIDMoS

Meanwhile, a large number of public-school teachers who are qualified to provide the education that Syrian children require, have sought other means of earning money, including giving private lessons.

Additionally, the education sector has suffered both directly and indirectly from the sanctions imposed on Syria, despite the existence of humanitarian exemption for all legitimate aid operations, including education interventions. Sanctions have notably curtailed the delivery of technical equipment, tools and teaching materials. The challenging and complex regulations that exist have led to numerous suppliers (both US and non-US) declining, for instance, the provision of software and laptops to NGOs in Syria.

Today, the Syrian government’s main concern seems to be the manipulation of the national curriculum which they are using to transmit propaganda to students. And the allocations to the Ministry of Education by Damascus, have actually declined in real terms by more than six-fold (around 81%) between 2010 and 2021.

The instrumentalisation of education to serve the Syrian regime’s interests and the failure to invest in infrastructure, services and the quality of teaching, contributes to the ongoing tragedy of young people, and more generally the people of Syria. In this context, the number of children and adolescents who will remain out of school, with no prospects of returning, will only continue to grow.

In Syria, as is the case everywhere, education on its own cannot transcend all the problems that exist in society. However, drastic improvements and investment through human capital and a strong, well-resourced infrastructure, is essential for improving the lives of future generations.

Joseph Daher teaches at the University of Lausanne, Switzerland, and is an affiliate professor at the European University Institute in Florence, Italy, where he participates in the "Wartime and Post-Conflict in Syria Project." He is the author of "Syria after the Uprisings, The Political Economy of State Resilience".