As the global cost of living and climate crises continue to exacerbate inequalities, Adele Walton argues that the hierarchical labels like 'first' and 'third' world fail to account for the exploitative nature of racial capitalism. 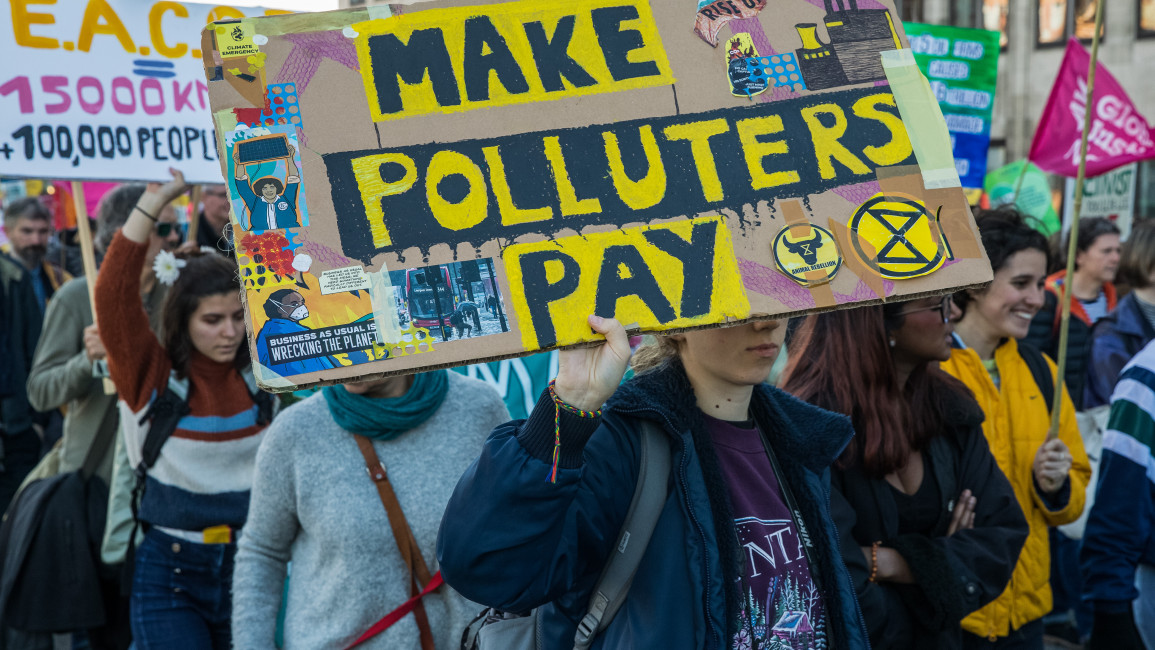 Climate justice campaigners march from the Shell Centre to Trafalgar Square to demand urgent climate finance and reparations for loss and damage for global south communities on 12 November 2022 in London, United Kingdom. [Getty]

Rising food and fuel prices, a worsening debt crisis, harsh financial conditions - the world is facing what the UN calls the largest cost of living crisis of the 21st century.

Whilst the impacts of the global cost of living crisis are not being felt equally, with lower income countries being disproportionately impacted by inflation and debt expenditure, the crisis seemed to hit the news agenda only once its impacts were being felt in the Global North.

Ethiopia is one country whose suffering has gone long ignored by the global community and international media. Despite the signing of a peace deal last week, the conflict in Tigray has led to the displacement of millions while hundreds of thousands are on the brink of famine.

In August, the World Health Organisation (WHO) director general argued that the reason for the lack of coverage of the humanitarian disaster in Tigray compared to Ukraine comes down to the colour of the victims’ skin.

"The legacy of colonial exploitation has left the Global South with inadequate resources to cope with climate breakdown, and calls for financial support have been largely ignored by rich nations"

With 6 million people unable to access basic necessities, head of WHO Tedros Adhanom Ghebreyesus questioned why the crisis has not received equal concern to the conflict in Ukraine. Now in a cost of living crisis the situation is only becoming more dire.

Similarly, the uneven impacts of the climate crisis have left poorer nations in vulnerable circumstances. The African continent accounts for less than 4% of historic global emissions, yet is being disproportionately impacted by climate breakdown.

In Pakistan, a country that has contributed only 0.3% of global emissions, floods they experienced this year submerged a third of the country, and will cost $46 billion in damages and reconstruction.

At COP27 talks last week, the Prime Minister of Barbados voiced the hypocrisy of rich white nations, who profited from the exploitation of black and brown people, now abandoning them in the face of climate breakdown.

Women are absorbing the costs of food inflation worldwide

The legacy of colonial exploitation has left the Global South with inadequate resources to cope with climate breakdown, and calls for financial support have been largely ignored by rich nations. With a cost of living crisis that is pushing an additional 71 million people in the poorest countries into extreme poverty, the picture is even bleaker.

Reporting around the cost of living crisis has seen people in rich countries expressing horror that they are having to experience the shocks of global inflation. Problematic claims that “we aren’t a third world country” are not rare to hear from the general British public when interviewed by journalists.

But these ignorant views reveal an insidious belief: that poverty and injustice are deemed natural conditions of poorer countries.

This is concerning but not new. Ideas of European exceptionality date back to the Enlightenment period. Colonial constructions of ‘The Dark Continent’ became popular in the 19th century, and these racist ideas were used to construct Africa as inferior, violent and barbaric in order to justify colonial exploitation.

Not only this, but the idea of the ‘first world’ and the ‘third world’ became a way of associating different geographical locations with different evolutionary stages associated with time.

Today, paternalist comparisons between ‘developing’ versus ‘developed’ countries and the cost of living crisis follow this same pattern. These views obscure the complex realities of global inequality whilst reinforcing white saviourist tropes.

While the cost of living crisis is impacting people uniquely globally, media representations ought to frame the crisis as an economic reality that has come about from decades of austerity and neoliberal policies, as opposed to a spontaneous event that happened by accident.

Generalising comparisons between the Global North and Global North should be avoided when we are trying to fight the cost of living crisis. Instead, understanding poverty and inequality as a product of a global system of racial capitalism ought to be understood as an international struggle that has parallels across the globe.

No one is exempt from the harsh realities of capitalism, and as the impacts become more widely felt, it is time for us to recognise that we can only fight it when united in our struggle. It’s time to ditch the developed versus developing binary and realise that racial capitalism is a global system that exploits and fails us all.

Adele Walton is an International Development graduate and freelance journalist, who has written for Jacobin, Tribune, openDemocracy, Vice, Dazed and more. She studied at the University of Sussex and wrote a dissertation critiquing the racialised logics of underdevelopment and good governance narratives. She is half Turkish and half British.

Labour's failure to tackle racism could cost them long-term

ID cards will threaten minorities’ civil liberties in the UK