The newly elected extremist far-right government of Israel is the logical result of decades of unchecked occupation, colonisation, and ethno-nationalism, writes Joseph Daher, and any struggle for democracy must centre Palestinian liberation. 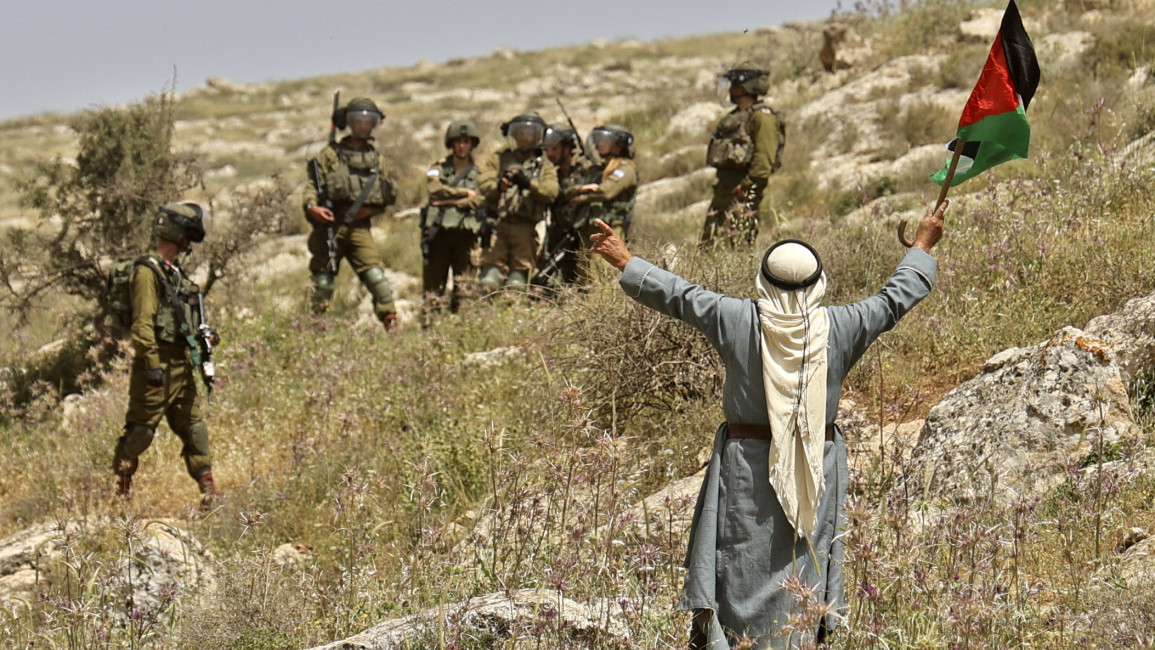 Israeli security forces deploy as Palestinians demonstrate against the establishment of Israeli outposts on their lands, in Beit Dajan east of Nablus in the occupied West Bank, on April 29, 2022. [Getty]

As in every Israeli election for the past 20 years, the media has announced that this recently elected government is the most right-wing in the history of Israel.

There is no doubt about it. Formed at the end of December last year, the new government headed by Prime Minister Benjamin Netanyahu, who is still being investigated for corruption, gives unprecedented power to extremist and fundamentalist Israeli groups and individuals.

Two of these are particularly concerning: Bezalel Smotrich's Religious Zionism Party and Itamar Ben Gvir's Jewish Strength, who are known for their racist rhetoric against Palestinians and advocating for the official annexation of the West Bank. Also elected was Avi Maoz, head of the far-right Noam party, who is openly anti-LGBTQ.

Ben-Gvir is a disciple of the extremist Rabbi Meir Kahane and an admirer of Baruch Goldstein, who massacred 29 Palestinians at the Ibrahim Mosque in Hebron in 1994, and does not recognize the existence of the Palestinian people.

"With figures such as these, Israel’s new ruling coalition is not just a far-right government, but an extremist and fundamentalist one"

He has also expressed on many occasions that his party will employ law to try and forbid Palestinian politicians from the Israeli parliament and expand arrest powers of the Israeli police against protesters opposing government policies.

On his side, Smotrich is an outspoken homophobic and co-founder of Regavim NGO, which promotes the expansion of illegal Israeli settlements and campaigns for the demolition of Palestinian homes and schools in the West Bank and southern Israel.

He has also called for increased legal barriers and security measures against human rights groups - calling them an “existential threat to the state of Israel" - and plans are underway to tax foreign government donations of NGOs.

With figures such as these, Israel’s new ruling coalition is not just a far-right government, but an extremist and fundamentalist one.

These figures have been nominated at key ministries and have been granted extensive powers over Palestinian lives. Ben Gvir heads the newly established national security ministry, which is an expanded version of the internal security ministry. This position provides him full authority over Israeli combined police forces, both in Israel and in the Occupied Palestinian Territories (OPT).

Smotrich has been appointed as Minister of Finance, and has been assigned the responsibility to supervise the territories in the West Bank that are under full Israeli military and civil domination and where most of the settlements are located, as well as possessing extensive power over the Palestinian population in Gaza.

This new Israeli government wasted no time implementing new draconian measures against Palestinians, especially after the UN General Assembly passed a resolution on December 31 calling on the International Court of Justice to address the Israeli occupation of the Palestinian territories.

On January 6, the Israeli government decreed a series of sanctions: confiscation of 139 million shekels (more than £33 million) from taxes and customs revenues collected on behalf of the Palestinian Authority to be paid to 15 Israeli families of victims of Palestinian attacks; freezing of Palestinian construction projects in Area C of the West Bank, over which the State of Israel has exclusive security and administrative control; revocation of VIP permits facilitating the entry and exit of several Palestinian officials, including the Minister of Foreign Affairs; and enforcing a ban on flying the Palestinian flag in Israeli public space.

Last week, tens of thousands of people protested in Tel Aviv against Netanyahu’s new government and denounced the proposed reform of the justice system by this government. If this reform is adopted by the Knesset, it will greatly limit the role of the Supreme Court, giving the government power to appoint judges and veto its decisions.

Many see this as a way for the Prime Minister to evade justice. Some sectors of the Israeli population see the current government's illiberal agenda as an existential threat to their political system and way of life.

"This does not mean that no opposition should occur against this government and its policies, but that the main problem resides elsewhere: the racist and colonial nature of the Israeli apartheid state"

Still, even in this demonstration, some did not hesitate to criticise or violently confront other protesters carrying Palestinian flags or chanting anti-apartheid slogans. These pro-Palestine protesters were accused of diverting the main message of the demonstration - “defending Israeli democracy” - to issues such as the occupation.

When Palestinian MP Ayman Odeh and Palestinian activists of the organisation Standing Together took to the stage, some protesters called them out and said they did not want Arabs in the demonstration, and that the issue of the occupation should not be included in this protest.

This shows that the increasing presence and power of extremist and fundamentalist Israeli groups in this government is not the main problem. Far-right and extremist parties, such as Yamina led by former Prime Minister Naftali Bennett, have already been present in previous governments, while racist Israeli mobs marching through Palestinian neighbourhoods chanting “Death to Arabs” is a reality that predates the most recent election.

This does not mean that no opposition should occur against this government and its policies, but that the main problem resides elsewhere: the racist and colonial nature of the Israeli apartheid state.

The policy of the Judaization of Jerusalem, colonisation of the occupied territories and violence against Palestinians have been continuous since the Nakba and the establishment of the Israeli state in 1948, regardless of the official government’s political leanings.

This happened under a government supported by the so-called "left-wing" Meretz party, and which could only exist thanks to the support of the party of the Palestinian Islamist Mansour Abbas.

Given the utterly reactionary nature of Israel, the ever-increasing political hegemony of the far-right over the past decade should come as no surprise. It is in some ways a logical extension of the Zionist movement, its ethno-nationalism, Israel's institutional racism and more than seven decades of oppression and dispossession of Palestinians.

"No struggle for democracy can take place without the liberation of Palestinians and the destruction of the structures and institutions of the apartheid, colonial and racist state of Israel"

No struggle for democracy can take place without the liberation of Palestinians and the destruction of the structures and institutions of the apartheid, colonial and racist state of Israel.

Instead, the establishment of a democratic, social and secular state in historic Palestine, with equal rights for the Palestinian and Jewish peoples, would represent a real step forward for democracy and a progressive alternative.

In the new state that would unite Palestinians and Israelis, all Palestinians would have the right to return to their lands and homes from which they were forcibly removed in 1948, 1967 and beyond. In addition, such a political transition must also include a comprehensive economic development and reconstruction project to guarantee Palestinians their social and economic rights.

Until then, no democracy has ever or can exist in an apartheid state that gives Jewish Israelis special privileges and reduces Palestinians to second-class citizens.

Joseph Daher teaches at the University of Lausanne, Switzerland, and is an affiliate professor at the European University Institute in Florence, Italy, where he participates in the "Wartime and Post-Conflict in Syria Project." He is the author of "Syria after the Uprisings, The Political Economy of State Resilience".