Qatar 2022 World Cup 'meme galore' for football fans
World
3 min read
The New Arab Staff & Agencies
Fans have come together to share comedic and heart-warming World Cup moments that have taken place in Qatar, after the tournament began on Sunday. 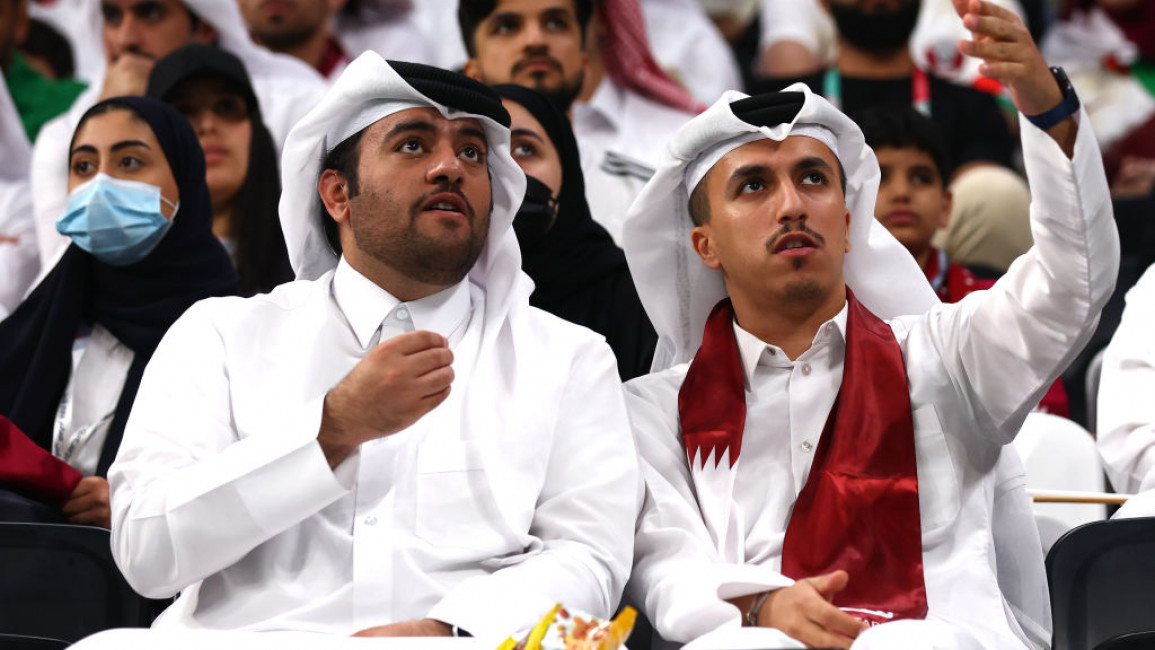 Football fans across the globe have entered into the spirit of the 2022 World Cup tournament in true millennial fashion, by sharing memes of the global event in Qatar.

Fans have come together to share comedic and heart-warming World Cup moments that have taken place in Qatar, after the tournament began on Sunday.

Observing how cultures come together has proved popular among them, as visitors in the country embrace its local norms and traditions.

This was seen as many Arabs expressed encouragement towards Irish singer Martin Farragher, who appeared on the AlKass channel singing 'Tala’a Al-Badru ‘Alayna', a popular Islamic song, in the region.

Two Brits from Liverpool also hilariously shocked World Cup fans, as they shared a story about meeting a Sheikh’s son as they were on a "hunt for some beer" – which has been banned in and around World Cup stadiums.

"He took us back to the palace and showed us he had lions… look around you, it doesn’t get any better than this” the Everton fan told a TalkSPORT reporter, according to videos posted online.

“We were on the hunt for beers & we ended up at a big palace, we saw his monkeys & exotic birds!” 🐒

These England fans are out in #Qatar & here’s a recording of them in the palace.#FIFAWorldCup #Qatar2022 pic.twitter.com/wwgYjrUUTC

Many were amused by the story, with one Twitter user saying: "all the PR in the world could not make this up".

@RPMComo @ttmygh All the PR in world could not make this up.

Fans also commented that "the only beer you’ll be getting at the World Cup is TAK BEER," – an Arabic expression inviting people to acknowledge that “god is the greatest”.

The only beer you’ll be getting at the World Cup is TAK BEER!#AllahuAkbar #WorldCup

Many Arabs also expressed their pride at the success of the opening ceremony.

“What a beautiful and heart warming display of diversity & inclusion… loving the World Cup already,” twitter user Tahir wrote following Morgan freeman’s appearance on the stage, in which he stated “what unites us here… is so much greater than what divides us”.

What a beautiful and heart warming display of diversity & inclusion! Loving the world cup already! ❤️

Memes about the Official 2022 FIFA Fan Festival anthem ‘Tukoh Taka’, have also emerged, with mixed reviews from Arab fans who were disappointed by it.

TikToker Nour El-Din made a TikTok depicting Western fans enjoying the music, while Arab fans acting confused as the Arabic section of the song plays.

Others have labelled the track “the worst World Cup song”

tukoh takah has got to be the worst world cup song omg pic.twitter.com/RxYlJmlyJI

The memes did not end there.

Many reposted audience reactions from Qatar's game against Ecuador, in which they lost 0-2, on Sunday, stating that the World Cup will deliver plenty of Arab memes.