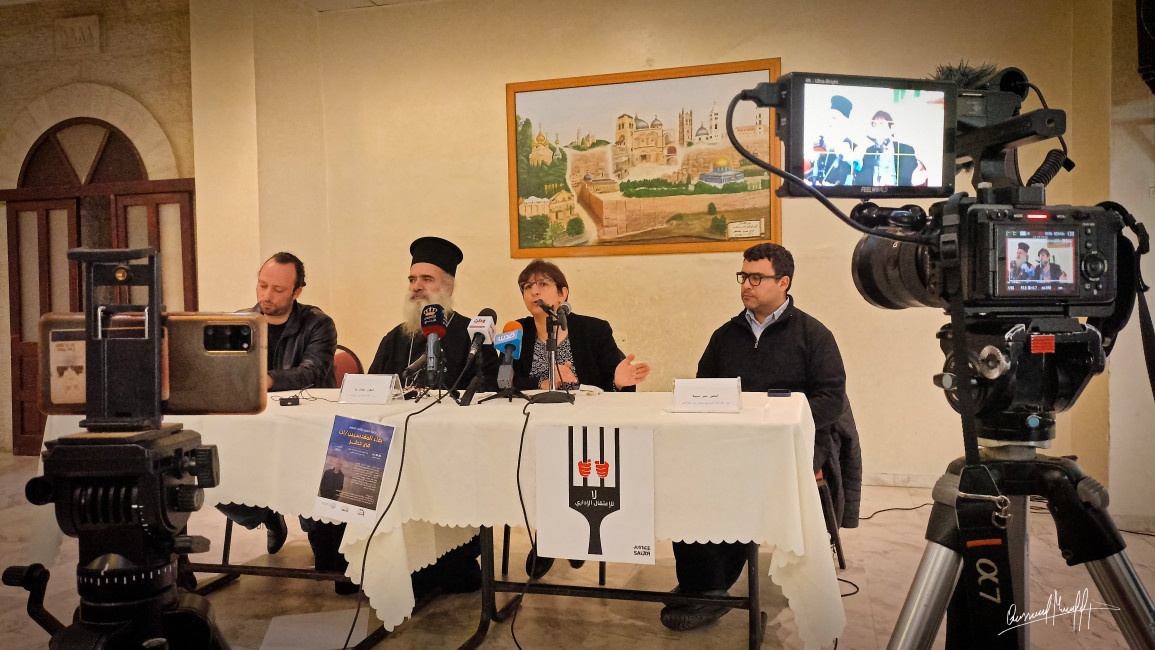 Palestinian presence in Jerusalem is in danger, said Palestinian human rights activists on Wednesday in a press conference held in Ramallah, organised by a coalition of human rights organizations.

The press conference, which focused on Palestinians' residency rights in Jerusalem, spotlighted the case of Palestinian-French human rights lawyer, Salah Hamouri, detained without charges by Israeli forces since March.

"Salah Hamouri's current detention order will expire in early December, after which he faces the real possibility of deportation," said Saha Francis, director of the Addameer Prisoners' Support Association, speaking at the conference.

"Israeli authorities stripped Hamouri of his residency rights in Jerusalem in October 2021, then arrested him under the administrative detention system which is used only for West Bank Palestinians, which is a way for Israeli authorities to say that they decide who is a Jerusalemite and who isn't," Francis stressed.

"Hamouri's deportation would pave the way for later deportation of Jerusalemite Palestinians, which will further threaten Palestinian presence in the city," added Francis.

The case of Salah Hamouri is "an example of Israeli policy towards Palestinians in Jerusalem," according to Munir Nseibeh, director of the Community Action Center in Jerusalem.

"Since its occupation of the eastern part of Jerusalem in 1967, Israel gave all Palestinians in the city a resident status," said Nseibeh. "Along the years of occupation, the occupying state has constantly expanded its laws to further strip Palestinians of their residency rights in Jerusalem, engineering their legal status."

"In the 1970s, Israel began to strip Palestinians of their Jerusalem residency if they left the country for seven years or obtained residency rights in another country," detailed Nseibeh.

"In recent years, Israel passed the 'Center of Life' law, making it possible to revoke Palestinians' residencies in Jerusalem only for living outside of Jerusalem, without leaving the country," he pointed out.

"Since 2018, Israel made it possible, by law, to revoke Palestinians' residency rights in Jerusalem for 'lack of allegiance to the state of Israel', which is the vast, unclear criteria upon which Hamouri's residency was revoked," further noted Nseibeh.

"If we don't stand up against this policy, more Palestinians will lose their right to live in their city," he added.

"All efforts must come together to support Salah Hamouri and Palestinian rights to live in Jerusalem because they are the real inhabitants of the city and the guars of its historical and cultural identity," Atallah Hanna, the Greek-Orthodox archbishop and a renowned Palestinian Christian figure, said at the press conference.

"We want Salah free, and we want him in Jerusalem, his city," stressed Atallah Hanna.

Salah Hamouri's coming hearing for his residency revocation is in February. In the meanwhile, he remains in solitary confinement at the Israeli Hadarim prison.

According to Addameer, more than 800 Palestinians are currently held in Israeli jails without charges under administrative detention orders.

"We are waiting to see what happens at the end of Salah’s current detention," Hamouri's mother, present at the press conference, told The New Arab.

"He could be released, his detention could be renewed as it already has several times, and he could be sent out of the country," she said.

"We visited him ten days ago and we saw that his morale is high," Hamouri's mother added. "In fact, it was he who raised our morale."

Since 1967, Israel has revoked the residency rights in Jerusalem of more than 14,000 Palestinians, according to human rights groups.

"This number is much larger if we take into account the children of these Palestinians and their descendants," Munir Nseibeh said to TNA. "It is an effective, long-term reduction of the Palestinian population of the city."