One killed in new Iran strikes on Kurdish groups in Iraq

One killed in new Iran strikes on Kurdish groups in Iraq
MENA
3 min read
Agencies
"A member of the peshmerga was killed in an Iranian strike on the area of Koysinjaq," also known as Koya, Ali Boudaghi, an official from the Democratic Party of Iranian Kurdistan (PDKI), told AFP on Monday. 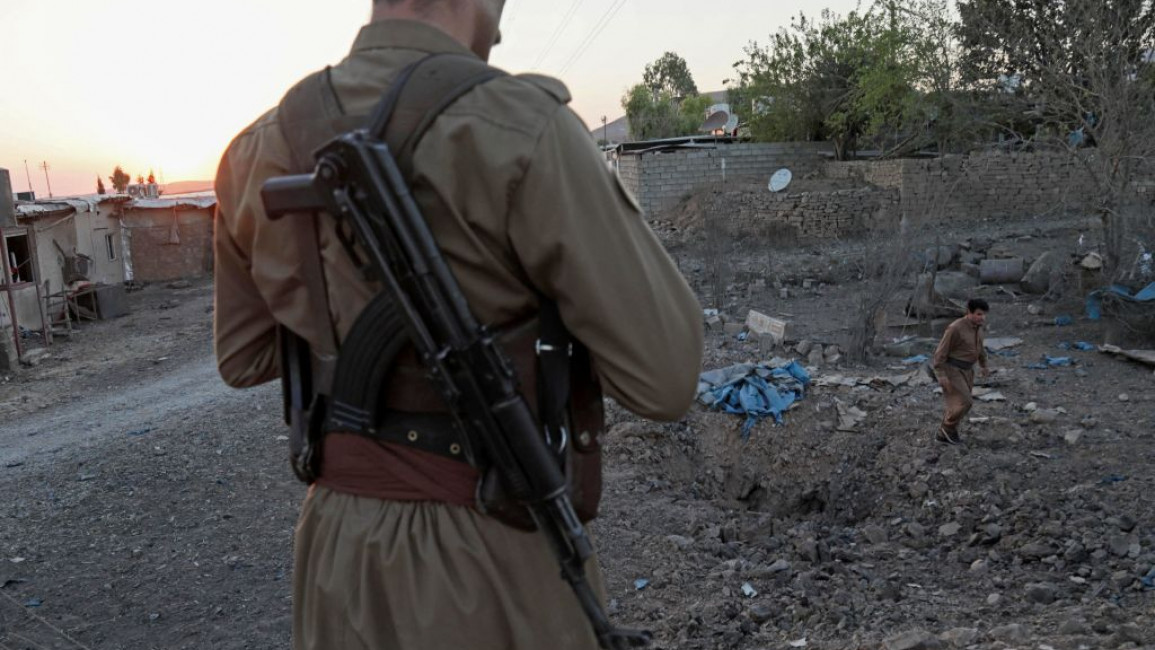 Iran launched cross-border strikes against Kurdish opposition groups in Iraq overnight, killing at least one fighter, a week after similar attacks on the factions Tehran accuses of stoking protests back home.

Iran has been shaken by two months of protests sparked by the death of Kurdish-Iranian woman Mahsa Amini, 22, who died in custody days after her arrest by the morality police for allegedly breaching the country's strict dress code for women.

"A member of the peshmerga was killed in an Iranian strike on the area of Koysinjaq," also known as Koya, Ali Boudaghi, an official from the Democratic Party of Iranian Kurdistan (PDKI), told AFP on Monday.

The PDKI said Iran had targeted it with missiles and suicide drones in Koya and Jejnikan, near Erbil, the capital of Iraqi Kurdistan.

"These indiscriminate attacks are occurring at a time when the terrorist regime of Iran is unable to stop the ongoing demonstrations in (Iranian) Kurdistan," the PDKI, the oldest Kurdish party in Iran, said.

"Our HQ was once again attacked by the Islamic Regime tonight. We've been carefully prepared for these types of attacks & have no losses for the moment," it said on Twitter.

The US Central Command, which oversees US military operations in the Middle East, condemned the "illegal" Iranian strikes near Erbil.

"Such indiscriminate and illegal attacks place civilians at risk, violate Iraqi sovereignty, and jeopardise the hard-fought security and stability of Iraq and the Middle East."

The latest Iranian attacks come a day after Turkey carried out air raids against outlawed Kurdish militants in Iraqi Kurdistan and northern Syria.

The Turkish offensive targeted bases of the Kurdistan Workers' Party (PKK), which Ankara blames for an explosion in central Istanbul a week ago that killed six people and wounded 81.

The PKK has waged a bloody insurgency in Turkey for decades and is designated a terrorist group by Ankara and its Western allies. It has denied involvement in the Istanbul blast.

The new Iranian strikes come less than a week after similar cross-border attacks by Tehran that killed at least one person.

Tehran accuses Kurdish-Iranian opposition groups based in northern Iraq of stoking the "riots" at home and has stepped up its attacks since the protests began.

Iraqi Kurdistan hosts several Iranian Kurdish opposition groups which have in the past waged an armed insurrection against Tehran.

In recent years their activities have declined, but the wave of protests in Iran has again stoked tensions.