New round of Syria peace talks begins in Kazakhstan capital Astana
World
2 min read
The New Arab Staff
The 19th round of Astana peace talks on Syria has kicked off in Kazakhstan's capital, with the participation of the Syrian regime, opposition, and guarantor countries. 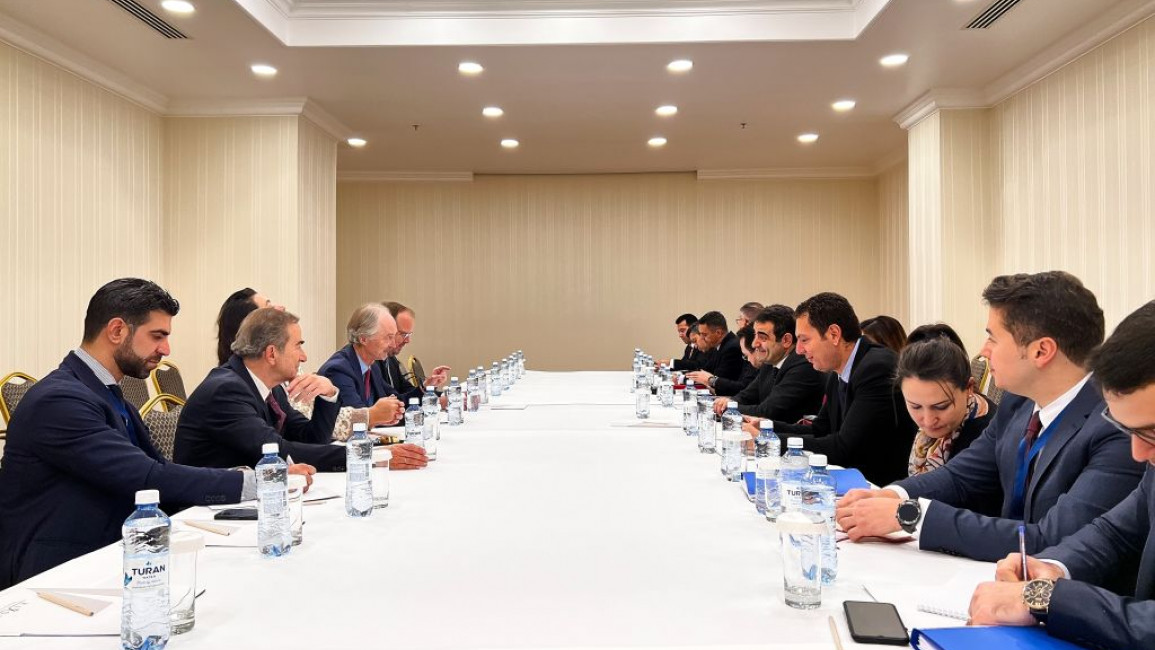 The 19th round of Astana peace talks on Syria began in Kazakhstan's capital on Tuesday.

The talks kicked off in Astana, formerly known as Nur-Sultan, with the participation of the Syrian regime, opposition, and guarantor countries - which are Russia and Iran on the regime's side, and Turkey, which backs the Syrian opposition.

The talks will in part address the "containment of [the] situation, protection of civilians, de-escalation and focus on [the] political process", according to the UN, who say the special envoy for Syria Geir O. Pedersen will be present at the talks.

.@GeirOPedersen will engage with all parties in Astana talks beginning shortly to urge containment of situation, protection of civilians, de-escalation, and focus on political process.

The talks will also focus on combating terrorism, sanctions imposed on the Syrian regime, and the return of refugees, according to Syrian state media agency SANA.

Russian envoy to Syria Alexander Lavrentyev commented on recent Turkish escalations in Syria ahead of the event, calling on Ankara to show restraint in its use of "excessive" military force to keep tensions from rising.

"We will call on our Turkish colleagues to show… restraint in order to prevent an escalation of tension, not only in the northern and northeastern regions of Syria, but throughout the entire territory," Lavrentyev, said according to Russia's RIA state news agency.

This comes after Turkey stated it could launch a ground operation in Syria and Sunday saw a series of air strikes targeting bases of outlawed Kurdish militants across northern Syria and Iraq.

At least 37 people were killed in the strikes, according to a report by the UK-based monitoring group the Syrian Observatory for Human Rights (SOHR).

Representatives from the UN, Jordan, Lebanon, and Iraq will be observers in the Astana talks, according to Kazakh outlet Astana Times.

The 18th round of Astana was held last June, but the talks have been held in the Kazakh capital since January 2017.

In May 2017, Turkey, Russia, and Iran announced that they had reached an agreement to establish a "de-escalation zone" in Idlib as part of the meetings. However, the Syrian regime and Russian forces continue to attack the area till today.