Hundreds mourn two Palestinians killed after Israel's West Bank raids
MENA
4 min read
Qassam Muaddi
West Bank
Yazan Afaneh, 24, was killed by an Israeli bullet in the heart in Ramallah, while Samer Khaled, 25, was killed in the immediate aftermath of an Israeli raid in Balata, by Palestinian gunmen. 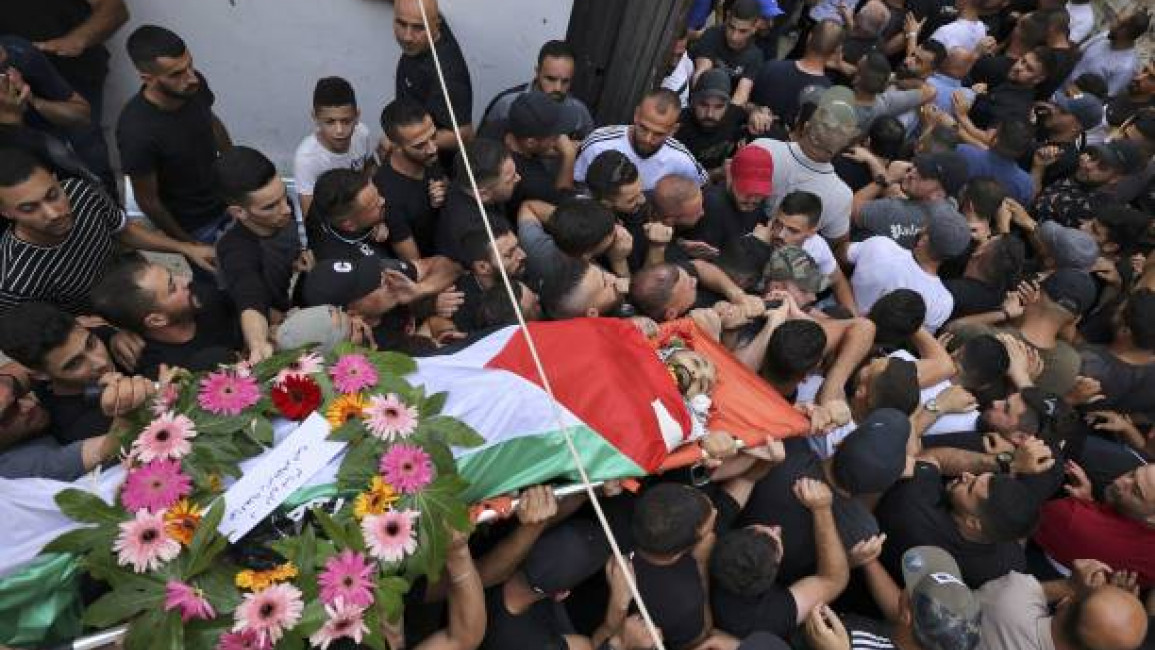 Hundreds of Palestinians took part in the funerals of 24-year-old Yazan Afaneh and 25-year-old Samer Khaled on Thursday, both killed during Israeli military raids in the occupied West Bank.

In the Qalandia refugee camp outside Ramallah, Palestinians mourned Yazan Afaneh, the second refugee from the camp to be killed by Israeli forces in two weeks.

"Yazan was a simple young man, with a normal life and normal expectations to build his own future," his father told The New Arab while receiving mourners' condolences at the Qalandia popular services committee hall.

"He was out of his home when I received a call from one of his friends who told me he was wounded by the Israeli army," recalled the father. "I rushed to the Ramallah hospital and learned that he had died upon arrival."

Mohammad Abu Latifah, a close friend of the deceased, said Afaneh was a popular barber and kind to all people in the camp.

"He befriended the old and the young, and even the children," Abu Latifah said.

Two Palestinian youths were shot dead by Israeli occupation gunfire during military raids across the occupied West Bank and Jerusalem.

They were identified as Samer Khaled from Balata and Yazan Afana from Qalandia. pic.twitter.com/z6ib42NWRP

Afaneh was in Sateh Marhaba, Ramallah when Israeli army vehicles entered the neighbourhood, leading local people to throw stones at the soldiers and the young barber joining in.

"The Israeli soldiers began to shoot and Yazan received a bullet in the heart... By the time the ambulance arrived, Yazan had bled a lot, and he died before reaching the hospital," he added.

In the Balata refugee camp in Nablus, hundreds of Palestinians took part in the burial of Samer Khaled, 25, who was killed during an Israeli raid on the camp after midnight.

The funeral was interrupted by Palestinian police firing tear gas canisters at the procession. Angry mourners blocked several streets in protest before the funeral resumed and the body of Khaled was finally laid to rest at Nablus cemetery.

Painful|| The father of the 26-year-old Palestinian youth Yazan Afana bids farewell to his son who was shot dead in cold blood by the Israeli occupation forces during a military incursion into Qalandia refugee camp. pic.twitter.com/i6LPpVsA2F

"What happened is that there were claims by the Israeli army that they didn't kill Samer Khaled, and so the Palestinian Authority wanted to conduct an autopsy on his body," Ameen Abu Wardeh, a journalist and Nablus local, told The New Arab.

He said the family refused the request and wanted to go ahead with the funeral, leading Palestinian police to try and halt the procession and take the body to the morgue for autopsy.

"Things got out of hand and clashes erupted," said Abu Wardeh.

Israeli media said Palestinian officials had notified them that Khaled was probably not killed by Israeli gunfire.

Nablus has been at the centre of an Israeli military escalation in the last two months. Israeli forces have repeatedly raided the city's eastern sector, often escorting settlers into the religious site of 'Yousef's Tomb' and exchanging fire with Palestinian gunmen.

In late July and in early August, Israeli forces also raided Nablus' old city, engaging in an hours-long battle with Palestinian militants. Four Palestinian fighters were killed, in addition to a teenager.

US officials visit the region

Israeli raids on Palestinian cities and towns continue as US Assistant Secretary of State for Near Eastern Affairs Barbara Leaf visits Israel and the occupied West Bank for a three-day visit, as part of a larger tour of the region.

According to Palestinian media reports, she will discuss the recent escalation in the West Bank.

On Wednesday, Palestinian Prime Minister Mohammad Shtayyeh met the US envoy to the region, Hadi Amru, in Ramallah.

Shtayyeh told Amru that the Palestinian people are "experiencing great pressure" due to  "unprecedented Israeli repressive measures, including arrests and land grabs in addition to the absence of a political horizon", according to the PA's Wafa news agency.

Shtayyeh also urged Amru "not to obstruct" Palestine's renewed efforts to obtain full membership at the UN, according to Wafa.

Since the beginning of 2022, Israeli forces have killed more than 140 Palestinians in the West Bank and Gaza Strip.